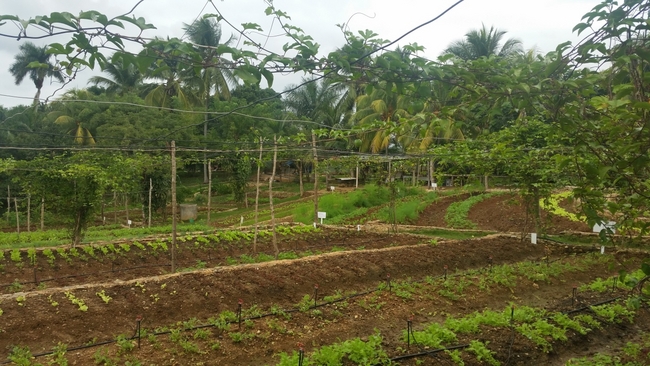 Fernando’s is a remarkable story of praxis: moving from lengthy academic study and a thorough understanding of sustainability and eco-agronomy to the practical application of all of these in the form of ‘Finca Marta’, the farm named in honour of his mother, set in the municipality of Caimito, 20 kilometres west of Havana.

There have been four years of intensive hard work: clearing rocks, stones, marabú (an invasive thorny shrub which quickly colonises untended agricultural land) and other vegetation from the eight hectares of land which make up the farm. One of the earliest projects towards sustainability was the digging of a 14 metre-deep well (pozo) out of the rocky ground. The well is named Pozo Juan Mochado, after the 74 year old whose experience was fundamental to this part of the project: Juan de Dios Machado Perez, gleefully explained to us his role as ‘marcador de pozos’ when we met him. To this have been added several more constructions: a family house, a house where ‘live in’ workers stay at various times, a barn from which the manure is converted into biogas to cook for more than 20 people daily and the remainder used for organic fertilizer; most recently and still underway is a large cistern which will collect water from the roof of the house and serve as a reservoir for irrigation. Much of the building has been done using the local rocks dug out from the ground on which they are working so has a rugged, natural look.

But of course the main purpose of the farm is to cultivate organic produce. There are raised beds filled with lettuce, chicory, rocket, cucumber, herbs of all kinds, tomatoes, cabbage, cauliflower, turnips and carrots, to name just some of the vegetables, in addition to passion fruit, bananas, eight varieties of mango and avocados and coconuts. Not only this, but there are cows (producing milk), horses and bullocks, the source of the manure for biogas. Finca Marta also has over 70 beehives which provide the farm with an income from sales to the State who buy the honey, wax, propolis and pollen. Honey production was 3 tonnes last year and Fernando is hoping for 4 in 2016 from the several harvests he can take because of the constant nectar flow from different flowers. The farm now supplies 25 restaurants in Havana with fresh produce as well as donating a supply to the local maternity home in Caimito. Next year the plan is to include the sale of a weekly family vegetable box to 50 local families.

The social element of the project is one particularly prized by Fernando and his equally hard-working wife, Claudia. In Cuba, as in most countries of the world, migration to the cities for better prospects has occurred on a substantial scale. But it is a crucial part of sustainable food production (and hence a movement towards food sovereignty) that people are willing to stay and work on the land, a traditionally poorly-paid activity. At Finca Marta there are now 16 people working; they work hard because they know that profits are shared and they are all earning several times what they would earn if they were not producing in this way. The atmosphere on the farm is genial: workers and family, and occasionally guests, eat together sharing the fresh produce (plus an occasional haunch of pork roasted in the outdoor oven) and plans for future work are communicated so that everyone knows what role they will play in the upcoming days. It’s really hard work, beginning at 5.30am or even earlier on occasions and sometimes going on till late with those who ‘live in’, but everyone is motivated and good natured as they share the enthusiasm for the enterprise.

It is hoped that, continuing the success of the sustainability theme, increased biogas production will permit by next year the creation of enough energy to feed an excess into the Cuban national electricity grid, an activity which -  unlike in the UK where feedback tariffs have recently been cut - will produce a further valuable income for the farm.

Fernando himself is still engaged at present in the world of education, supervising PhD students (one of whom is currently working at the farm while his wife, a dentist, is on a ‘mission’ in Venezuela for two years). His academic links with external eco-agronomy organisations have also seen him travel for short periods over the past couple of years to Zambia, Dominican Republic, Germany, Costa Rica, Colombia, Brazil, Peru, Nicaragua, North Korea, China, United States and Argentina to give advice and information to national eco-agronomy organisations in those countries. Increasingly, though, he is withdrawing from such commitments as he wants to devote his energies to ‘el proyecto’ (the project) both in his own municipality, where he hopes to reproduce the model with other farmers working in similar ways and further afield  in Cuba.

There is no doubt that  such a project requires not only a certain amount of start-up ‘capital’ which the family was fortunately able to raise, but also the enormous energy and dynamism of a character such as Fernando Funes-Monzote, but, as we sat with Fernando and some of his colleagues, rewiring the frames for his beehives into the night, it was clear that the energy and satisfaction is enough to make a success of the ‘proyecto’ itself and hopefully help the rural Cuban economy to re-shape itself towards  a successful and sustainable future.