The Voice of the Revolution 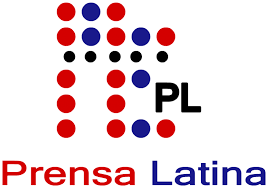 Following the triumph of the revolution in 1959, Fidel Castro delivered a speech denouncing the United States media and calling for a press service “written in our language” to counter and neutralise US propaganda. The idea of a Latin American press agency was born.

Shortly afterwards Prensa Latina was established by Ché Guevara who conceived of the new agency as an international initiative to combat the Cold War bias of Western media. Founding members included the Argentine writer and journalist Rudolfo Walsh; the Argentine journalist Ricardo Masetti who had covered Castro and Guevara’s guerilla struggle in the Sierra Maestra; and the Colombian writer Gabriel García Márquez.

Today Prensa Latina is an essential resource for news from Cuba, Latin America, and the Caribbean, employing dozens of journalists, technicians and other workers in 34 offices throughout the world.

TT: Tell us about your work at Prensa Latina and how you are finding London.

NMB: It is my very first time in London and I am really enjoying the experience. I find the people here very friendly and so many people have been helpful. I was in Brixton yesterday and the place was full of colour and sound – it reminded me very much of our streets in Havana. The only thing that has truly shocked me is the number of homeless people on the streets. Cuba is an underdeveloped country beset by many problems, but nobody is homeless in Cuba.

I have always wanted to be a journalist. I started at Prensa Latina in 1995 as an English translator, translating articles into English. I then took a two year course in journalism at the University of Havana (free, of course), whilst working on the news desk. I was then transferred to the North American news desk and then moved to the Cuban news desk. It was an exciting time, as I worked there during the Elián González and the ‘Battle of ideas’ campaign for his repatriation to Cuba.

I was then assigned to Barbados as a special envoy to open an office for the West Indies. But communication in terms of travel between the islands was poor and the whole project became too difficult and costly. I also had a three - year stint in Nicaragua at a very important time, when Daniel Ortega and the Sandinista’s were returned to power in 2007. I was then made chief correspondent in Ecuador and reported on the progressive achievements of the Rafael Correa government, lifting so many poor Ecuadorians out of poverty. I’ve also spent time working in India which is a country that fascinates and appals me at the same time. Such wealth and such dire poverty side by side!

I am currently in London to explore the possibility of Prensa Latina opening an office here. The agency used to have an office here many years ago, but during the ‘special period’ (1990s) we were forced to close it, as it was just too expensive to justify. I’m really hopeful that we will be able to reopen an office here and many people have been so helpful with ideas and contacts. So you could say that I am here in London on a reconnaissance mission for Prensa Latina.

TT: Former Prensa Latina president, Frank González, described it as being part of the Revolution “since it was born with the revolutionary process.” Do you agree with this and can you give our readers some background on the agency?

NMB: Prensa Latina was indeed born of the Cuban Revolution. The Revolution needed an authentic Latin American ‘voice’ that could express our reality in contrast to the mainstream press. Our very first newswire went out on June 16 1959, just six months after the triumph of the Revolution.

Jorge Massetti, the Argentine journalist, came to Cuba in January 1959 to report on ‘Operación Verdad.’ This was the name given to an international press conference organised to counter the US propaganda against the nascent Cuban Revolution in relation to the trials of senior officers of the Batista regime. Many of these officers had murdered and tortured thousands of Cubans, which of course, as Fidel pointed out, had never been reported in the US press. From “Operación Verdad” Prensa Latina was effectively born.

From the very beginning our motto was to be on the side of the oppressed and to give a voice to the disenfranchised. Our first director, Jorge Masetti, famously described the agency as “objective, but not impartial”, because one cannot be impartial between good and evil, war and peace, or justice, domination or exploitation.

Since its inception the agency has struggled to counter the distortions of the large media corporations and the international information monopoly. Our driving force was for a new kind of media with the public having a right to the truth. For the first time in Latin America, the real concept of freedom of the press was now being practised, faithful to the interets of the people and their country.

TT: What have been the agency’s highlights over the last 59 years, and for you personally as a reporter too?

NMB: I have only ever worked for Prensa Latina so I am very attached to and proud of the agency. We have had some amazing journalists work for us over the years. We report with integrity and truth rigidly abiding by the international journalist code of ethics as defined by UNESCO. We have captured all the historic events of our time. We were reporting right from the start the unfolding terrible events of the military coup against the elected government of Salvador Allende in Chile, the fall of the Berlin Wall, the collapse of aparthed in South Africa and of course the incredible day the  last three Cuban Heroes were released. I have so many wonderful memories of my time working at the agency that I cannot begin to recount them all.

I am very proud of our work as an agency reporting on Africa, which is a continent that rarely makes the western news networks, unless there is a disaster like famine or some other disasater. We report positively, getting information out from places like Syria and Angola.

On a personal level, I really enjoyed my period in Nicaragua. The people are so warm and friendly and to be there reporting on the return to government of the Sandanistas in 2007 was inspiring. You could almost feel the hope of millions of ordinary Nicaraguans. I also really enjoyed my experience in India, which I find such a fascinating country. Their economic development has been so impressive and yet the poverty that exists at the same time is appalling.

TT: Before your visit here, were you aware of the Cuba Solidarity Campaign in the UK? How do Cubans view international solidarity?

NMB: I became aware of the CSC back in 1988 when I worked for a while at the brigadista camp. The Cuban people are very aware of the breadth of international solidarity they receive and it is vital to us, never more so than at present when Cuba faces very uncertain times with Donald Trump in the White House. As you know the vindictive US blockade of my country has left us isolated economically and culturally. It permeates every aspect of Cuban lifes and causes such hardships to our people. Knowing that we have such international solidarity around the globe helps to break this feeling of isolation and is enormously important to us.

I have to confess that I never thought  our five Cuban heroes would ever be released from US jails, but the international support and I know how much campaigning CSC did, was a major factor in their eventual release. Solidarity amongst people of the world is vital to our humanity.

You can keep up to date on Prensa Latina’s English language site at www.plenglish.com