Cuba remains defiant in the face of increased US aggression

A slew of new lawsuits against US, Cuban and foreign companies have been filed in US courts following the implementation of Title III of the Helms-Burton Act by the Trump administration in May 2019. 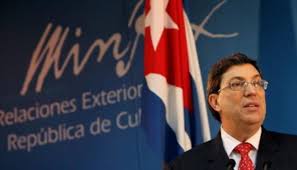 Brunop Rodriguez, Cuban Foreign Secretary denounced the new US measures at the UN

Title III opens the door for the former owners and heirs of properties nationalised after the Cuban Revolution in 1959 to bring actions in US courts for compensation for their losses. In 1996, when the law was introduced, the European Union and other critics insisted that the US government delay implementation of Title III. It did so and for the next 23 years, successive US presidents waived the act by six-month intervals. However, in May 2019 President Trump stopped the waiver.

According to Cuba’s Granma newspaper, lawsuits can now be filed, which mean Cubans could be “forced to return, reimburse or pay US claimants for the house in which they live, the area on which their communities are built, the arable land where they cultivate produce, the school where their children are educated, the hospital or polyclinic where they receive medical assistance.”

Bruno Rodríquez, Cuba’s Foreign Minister, described Title III as “riding roughshod over international law and the national jurisdiction of Cuba and third states, while establishing the alleged supremacy of the law and the political will of the US over them.”

In September, Miami-based law firm, Rivero Mestre, filed a lawsuit on behalf of a Cuban-American who claims to be the rightful owner of Havana’s international airport.

It claims that José Martí International Airport was expropriated from the father of Jose Ramon Lopez Regueiro in 1959. The case filed against American Airlines and the Latam Airlines Group (the largest in South America) argues that “defendants have trafficked in or benefited from ongoing, unlawful trafficking in the Airport, by arriving and departing the Airport and using its facilities for cargo and passenger transport.”

American Airlines responded with a statement that their “service to Cuba including José Martí International Airport in Havana is authorized by the US government.” However, the fact that US courts turned down US cruise line Carnival’s request for the dismissal of a separate lawsuit over its alleged trafficking in Cuban docks suggests that more will follow.

“If more airlines are sued, some of the smaller ones may leave Cuba or change airports – presuming other airports are not subject to claims,” said John Kavulich, president of the US-Cuba Trade and Economic Council. “There are fifty-one airlines serving Havana.”

The day after the case against the airlines was filed, another Florida resident, Daniel Gonzalez, filed a case against Amazon, for marketing charcoal produced on land he says was confiscated from his grandfather.

Gonzalez says he is the heir to of 2,030 acres of land in Cuba’s eastern Granma province that were nationalised in 1964 and claims that Amazon promoted the sale of Marabu charcoal produced on that property. He is also suing Florida-based Fogo Charcoal for importing the charcoal.

“Will the next defendant be Crowley Liner Services, which transported the charcoal from Cuba to the United States? FedEx that delivered some of the charcoal?” asked John Kavulich, underscoring how many companies could potentially be sued under Title III.

The US State Department has said Title III could produce up to 200,000 claims, reaching a value in the tens of billions of dollars. Cuba, the European Union and Canada say this violates international law.

So far, around 11 lawsuits have been filed under Title III against 19 defendants, 14 of which are foreign firms doing business with Cuba directly or indirectly. These include US cruise lines Royal Caribbean, Norwegian Cruise and Carnival Corp, and travel website operator Expedia Group Inc.

Several foreign governments have passed laws blocking the implementation of Title III. But the lawsuits are worsening Cuba’s business climate and putting off future investors, according to Havana-based diplomats and consultants.

On 6 September the US Treasury Department’s office of Foreign Assets Control took yet another step to tighten the blockade and strangle the Cuban economy. Remittances that can be sent to family in Cuba were reduced once again, now capped at $1,000 per quarter, and prohibited totally for “close family members of prohibited Cuban officials and members of the Cuban Communist Party.” This impacts on the standard of living for many families.

In September the Treasury Department also imposed sanctions on four maritime firms and vessels transporting Venezuelan oil to Cuba, amid an acute fuel scarcity in the island.

Many Cubans complain the measures are hurting the Cuban people and small non-state businesses are reeling from a sharp decline in tourism.

As reported on page 5, the Cuban population are having to endure electrical and transportation restrictions as a result of the US actions. New travel restrictions to the island, such as banning cruises, have also impacted on small restaurants and other tourist revenues which contribute to the public budget for health, culture and housing.

As Cuba stated in its 2019 report to the United Nations on the impact of the blockade: “All these actions were taken for the deliberate and declared objective of causing economic harm and depriving Cuba of financial resources.”

Some analysts say the Trump administration is seeking to win over the influential Cuban-American community in the swing state of Florida ahead of the November 2020 presidential election.

Addressing the United Nations General Assembly in September, Bruno Rodríguez said: “I want to denounce, before this General Assembly of the United Nations, that just a few months ago the US government has started to implement criminal, non-conventional measures to prevent fuel shipments from arriving to our country from different markets, by resorting to threats and persecution against the companies that transport fuel, flag states, states of registration as well as shipping and insurance companies.

“As a result of that, we have been facing severe difficulties in ensuring the supply of the fuel that the everyday life of the country demands; and we’ve been forced to adopt temporary emergency measures that could only be applied in a well-organized country, with a united and fraternal people that is ready to defend itself from foreign aggressions and preserve the social justice that has been achieved.

“In the course of last year, the US government has been steadily and qualitatively increasing its hostile actions and blockade against Cuba. It has been putting up additional obstacles to foreign trade and increasing the persecution of the banking and financial relations that we have with the rest of the world. It has imposed extreme restrictions on travelling as well as on any sort of interaction between both peoples. It has also hindered the relations and contacts of Cubans living in the United States with their home country.”

Cuban journalist Lázaro Barredo, former editor of Granma, said: “Helms-Burton literally has no precedents in the legal history of the United States. [It] constitutes an attack on sovereignty within the international community [and] represents political terrorism.” Helms-Burton would “extend US jurisdiction to other countries in an extraterritorial manner with the perverse intention of frightening, scaring, blackmailing, or dissuading persons interested in investing in Cuba.” We see a decision “to repossess the island, annex it, and move it toward total subordination to the United States.”

But Cuba remains defiant in the face of new attacks. As Cuban president Miguel Díaz-Canel said, when addressing the emergency energy-saving measures on national television in September: “I can assure you that we have a strategy to succeed and the Yankee administration will not achieve its aim of disheartening the Cuban people and much less vanquishing it.”