Election Missiles: Cuba and US votes 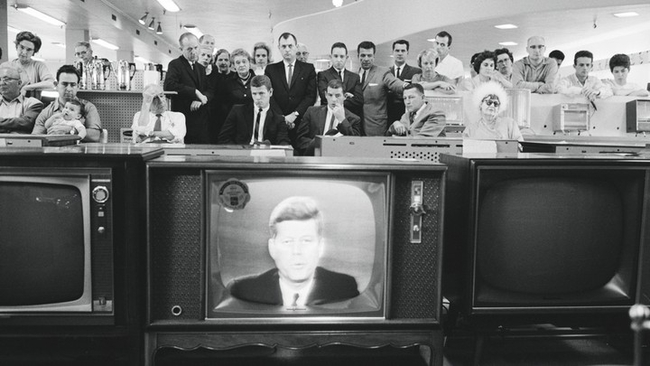 Customers in the electronics section of a department store watch as JFK addresses the nation, 22 October 1962

“Such… are ‘traditions’ in the United States that in the course of election struggle they forget, carried away by passions, about common sense and begin playing with fire, competing in saying more and louder absurd things.”

So said Nikita Khrushchev on 28 September 1962. He wouldn’t be your obvious choice for a commentator on US politics. But others have said the same. In 1978, academic statistician Edward Tufte showed that during election campaigns, US politicians consistently puffed policies to win votes they then rejected or regretted once in office.

US policy towards Cuba has been particularly vulnerable during electoral cycles and especially after the end of the Cold War. In 1992 Bush Sr signed the Cuban Democracy Act which clamped down on trade with Cuba. In 1994 Clinton further toughened up travel restrictions and in 1996 passed the notorious Helms-Burton Act, which extended the illegal American blockade to foreign firms. In 2002 Under Secretary of State John Bolton added Cuba to the so-called “axis of evil”, and in 2004 Bush Jr tightened restrictions on family visits and money transfers still further. These were all US election years.

In between, US presidents ignored their pledges or reversed their policy. It has always been clear that the blockade damages US business and agricultural interests, and undermines America’s international standing. It has never achieved anything towards regime change on Cuba. As a result, US policy restrictions on Cuba were eased in 1995, 1999, 2009 and 2011. Obama removed Cuba from the State Sponsors of Terrorism list in 2015. All were years when US citizens did not go out to vote.

The pattern of course mirrored the electoral muscle of Cuban-Americans. Cuban-Americans constitute less than 1 per cent of the US electorate. But they are concentrated in Florida, the biggest of the swing states, with 29 delegates at the Electoral College. Here they hold 8 per cent or more of the votes. They are more educated, wealthier and more political than Americans from other Latin American countries: they have also been much more likely to vote. And in a state where 250 votes either way can allegedly make the difference – Bush Jr claimed to have won the state by just over 500 in 2000, when 82 per cent of Cuban Americans voted for him – Cuban-American voters could hold the key to 10 per cent of the electoral college.

Cuban-American lobbying organisations are also among the most powerful in the US. Congressman Dan Burton and Senator Jesse Helms, for example, both received Cuban American funds – Helms a total of $76,000 in the election cycle 1995-6. Clinton travelled to Florida to sign the Helms-Burton Act, timing the ceremony for the start of the state primary.

This electoral pattern began to break down after 2004 as the Cuban-American population changed. Its balance shifted from the original exiles, who had left the island after the Revolution, towards younger people who had been born in the US or had arrived as economic migrants. These younger Cuban-Americans have less political investment in the blockade and more interest in maintaining links with businesses and families on the island. From 2008, Obama was able to refuse payments from Cuban-Americans and set out on a course of liberalising US policy. Noticeably, however, his significant concessions still came in non-election years. Only 54 per cent of Cuban-Americans voted for Trump’s hard line in 2016. But by the 2018 mid-terms it was back up to 72 per cent. Florida may be crucial to the presidential election of 2020 and Trump is already making a pitch again for those Cuban-American votes.

In September he travelled to Florida to announce new sanctions against the island. He introduced measures to reduce remittances, make it harder to transfer money to Cuba, and ban US citizens from staying in state hotels or buying Cuban rum or cigars in front of an audience of veterans of the Bay of Pigs invasion, assuring them that “change” was coming on the island “sooner than you think.”

What few people appreciate is how far back this electoral cycle goes. It stretches to 1960. Two weeks before the presidential election of that year, Senator John Kennedy lambasted outgoing President Eisenhower for “blunder, inaction, retreat and failure” over Cuba and loudly boasted that he would back opposition to Castro. Two years later his words came back to haunt him. US papers had evidence of a Soviet military build-up on the island and on 31 August 1962, Republican Senator Kenneth Keating, a sharp New York lawyer, accused President Kennedy of being “asleep at the wheel”. Keating had even heard “ominous reports”, that the Soviets were intending to build nuclear bases. Kennedy loudly dismissed the claim.

On 14 October 1962 USAF spy planes however spotted missile launchers on Cuba. The President was now in a corner. Whatever the Kennedys said in public, there was no strategic or diplomatic incentive for the Americans to do anything. Recent satellite overflights of the USSR had shown with devastating clarity that the Soviet nuclear arsenal was virtually non-existent. Washington defence analysts quickly showed that the new intermediate range missiles on Cuba had no strategic value. Even if the Soviets successfully launched every single one, the USA would still have more than enough nuclear firepower to annihilate the Soviets in retaliation. Moscow would never press the button.

America’s allies, particularly Harold Macmillan, the British premier, argued that Europe had faced intermediate range Soviet missiles for years and that the American president should ignore them. Adlai Stevenson, US representative at the UN, argued from day one of the crisis that the US could simply and quietly bargain away the missiles on Cuba in return for obsolescent UN missiles stationed in Turkey. CIA analysts had already worked out a scenario in which the Kennedy would do exactly that. Alternatively he could, as his advisors pointed out, play tough and impose a limit on the number of missiles on Cuba.

But publicly Kennedy chose none of these solutions. Instead, he allowed the crisis to escalate, conducting negotiations not by diplomacy but through broadcast on state-wide television, imposing a naval blockade of Cuba that (as we now know) interdicted not a single Soviet vessel and was never intended as anything but a show. Nuclear-armed tension became unbearable on Cuba, in the US, at sea, and around the world. Secretly – without even the knowledge of his Vice-President or his security chiefs – Kennedy was negotiating the missiles away in return for those on Turkey. But in public he claimed he was toughing it out. It was mind-numbingly risky.

And why did Kennedy ignore every sane voice and opt for the most dangerous public showdown of the Cold War? Well, of course, crucial mid-term elections were due in November 1962, six weeks after the missiles were discovered. It was look tough or see Keating’s taunts unleash an electoral catastrophe. But Kennedy found he had created a monster, a crisis which spiralled terrifyingly out of hand. It very nearly cost the world.

Back in September that year, Khrushchev had been right after all.