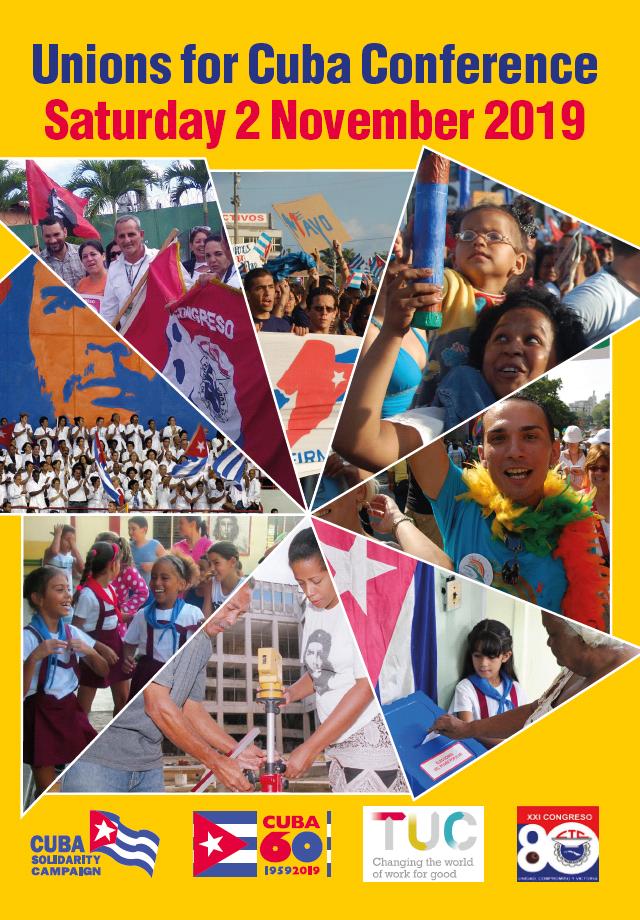 Join Cuban leaders from across the island, representing workers in health, education, transport, communications, energy, mining and public administration at the Unions for Cuba Conference in November.

The line up of speakers from Cuba and Britain at this historic conference includes:

The conference comes at a critical time for the Cuban people. The Trump administration has tightened the blockade to unprecedented levels in an attempt to strangle the Cuban economy. Title III of the Helms-Burton Act has brought increasing numbers of lawsuits taken to US courts, and restrictions on oil shipments are beginning to bite, causing fuel and energy shortages.

The conference is your opportunity to meet frontline Cuban Trade Unionists from across the island inspiring workers facing the challenges caused by the blockade.

We will hear from experts and discuss the latest developments in the ongoing aggressions from the Trump administration. We will explore ways to increase political and practical solidarity here and to counter the misinformation propagated about Cuba. Featured sessions include understanding the impact of Title III of the Helms-Burton Act and the blockade on Cuba’s education, health and society; workers’ democracy and influence in setting national economic policy in the country, and the role of international solidarity.

Congratulations to CTC on 80 years of fighting for workplace and social justice. The TUC is proud to build friendship between British and Cuban workers. We oppose Donald Trump’s economic war on Cuba and the US blockade which hits working people hardest. And we will always champion workers’ rights, at home and worldwide, to win equality, justice and dignity for everyone.”

The British trade union movement has a long and proud history of support for causes around the world - this conference will build on those traditions. It will look at ways of increasing political and practical solidarity, counter the misinformation propagated about Cuba; develop close inter-union relationships as well as informing, educating and mobilising activists.

“Cuba’s free, universal and inclusive education system is a beacon across Latin America and the Caribbean and I am proud of the NEU’s solidarity with the teachers’ union in Cuba and the Cuban people. I look forward to speaking alongside Cuban trade union leaders at this important conference.”

British unions hosting Cuban guests at national and regional level include UNISON, Unite the Union, ASLEF, NEU, and the CWU. Following the conference the Cuban guests will be spending a several days taking part in workplace visits and exchanges with their British counterparts.

Please make cheques payable to Cuba Solidarity Campaign (marked on the back ‘Unions for Cuba’). To make a BACS or credit card payment or to request an invoice, please contact CSC on 0207 490 5715 or email office@cuba-solidarity.org.uk

"Unite is looking forward to welcoming Cuban workers to the UK in November.

The Unions for Cuba conference is a symbol of the bonds of solidarity that exist between British and Cuban trade unionists and our commitment to stand shoulder to should with them in their fight against the US blockade."