MEETING:What's going on in Cuba? 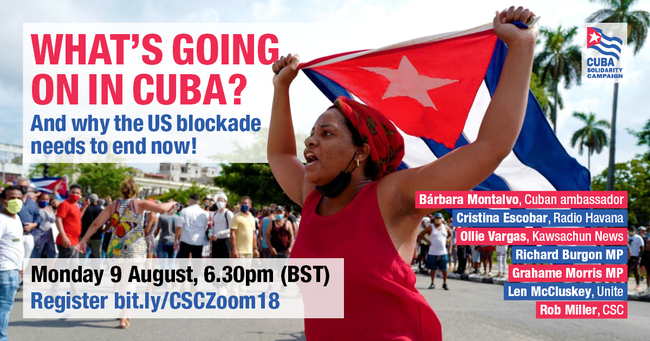 Her Excellency Bárbara Montalvo Álvarez, Cuban ambassador to the UK

Speakers from Cuba, Bolivia and Britain discuss recent events on the island: the misreporting, the role of US economic warfare and funding in fuelling unrest, and the urgent need for aid, solidarity and an international campaign against US intervention at this difficult and dangerous time for Cuba.

An economic crisis caused by the tightening of the US blockade, 243 additional US sanctions, and the COVID-19 pandemic has led to serious shortages in food, fuel, and medicines in Cuba. Rather than seeking to alleviate this suffering, the administrations of Donald Trump, and now Joe Biden, have sought to exploit the frustrations of the Cuban people in recent months. Cheered on by a right-wing Cuban American lobby in Florida, the international press hugely exaggerated the scale of protests on 11 July, while at the same time played-down or ignored the role of the blockade and US funding of opposition groups and social media campaigns, and misrepresented pro-government demonstrations as opposition.

Panellists will reflect on what happened on 11 July, how it has been reported, and why an end to the US blockade, as demanded by 184 countries at the United Nations in June, should be a moral and humanitarian obligation for the US government and for anyone genuinely wanting to aid the Cuban people.