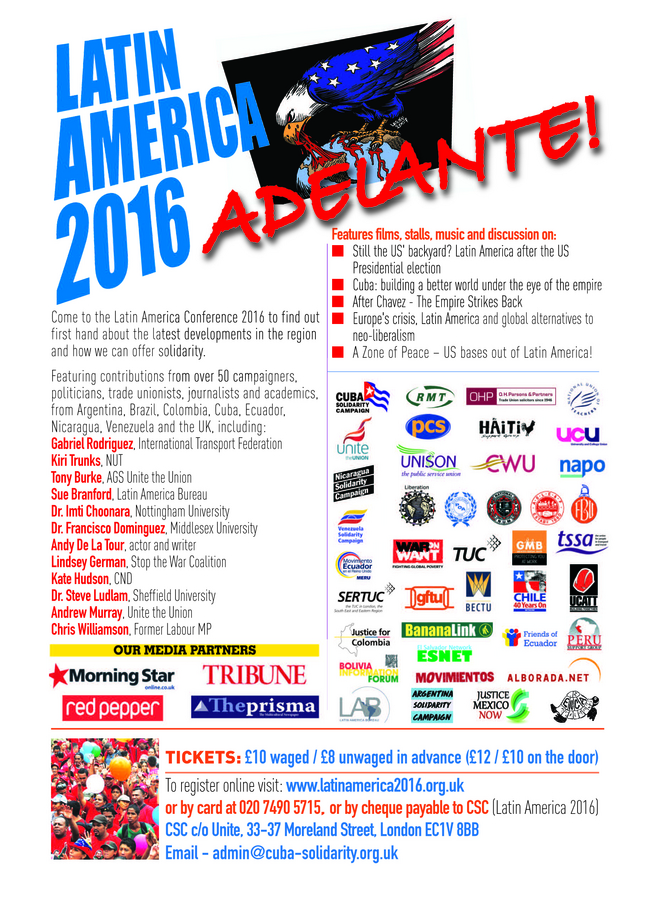 The largest event of the year for Latin America solidarity in Britain – now in its 12th year –will feature an impressive line up of ambassadors, academics, MPs, trade unionists, activists, campaigners, journalists and artists to discuss the politics of the region including plenary sessions in the main hall and many smaller, interactive seminars, film and much more.

Featuring contributions from over 50 campaigners, politicians, trade unionists, journalists and academics, from Argentina, Brazil, Colombia, Cuba, Ecuador, Nicaragua, Venezuela and the UK, including:

Book early to confirm your place at the Cuba seminars:
Living with the enemy: the truth behind the headlines of Cuba-US relations two years on
Experts from Cuba and North America discuss what has been achieved in two years of diplomatic relations between Cuba and the US. Should we be optimistic for the future, or is the US continuing a policy of regime change by another name.

Pillars of the Revolution: How health and education advances have shaped Cuban society and the world
British experts in health, education and culture discuss the Cuban Revolution’s achievements in these fields, how Cuba's internationalism supports international development, and what more could be shared to inspire progressive social policies.