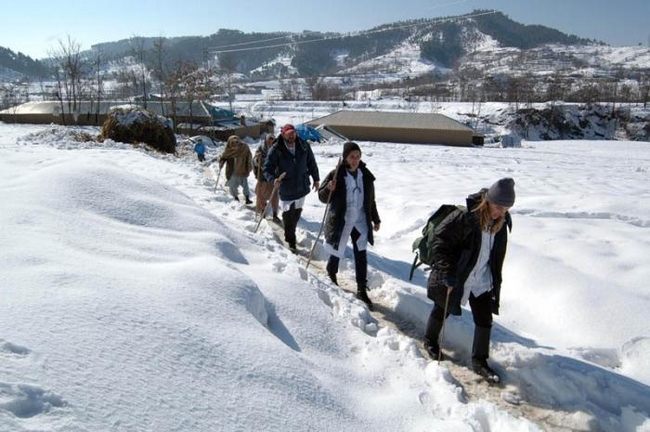 For saving lives and helping millions of suffering people around the world, Norwegian unionists convened in Trondheim, unanimously decided to nominate the Henry Reeve International Contingent of Doctors Specialising in Disastersand Large-Scale Epidemics for the Nobel Peace Prize, 2015.

The proposal is based on the achievements on various continents of more than 10,000 health professionals, specialising in treating survivors of natural disasters, hurricanes, floods, pandemics and disease, in a selfless vocation which inspires love and respect from millions of people on the planet.

The Contingent is composed of thousands of Comprehensive Family Medicine specialists, nursing graduates and highly qualified health technicians, with outstanding epidemiological knowledge and a wealth of experience working aboard, having participated in other international missions.

For example, 256 health workers are currently serving in West Africa, where they are contributing to the fight against Ebola in the most impacted countries - Guinea, Sierra Leone and Liberia.

THE BIRTH AND LIFE OF A HOPE

After receiving news of the tragedy caused by Hurricane Katrina in New Orleans, Cuba, represented by its historic leader, Fidel Castro, embraced the idea of helping the impacted U.S. citizens, with more than 10,000 volunteers offering their services, and so the contingent was born, on September 19, 2005.

On that date, Cuba proposed sending 1,586 doctors and 36 tons of medicine and diagnostic equipment, to treat the victims. President George W. Bush rejected the offer, but it served to bring together 39 brigades which had responded to emergency situations in 23 countries.

After the earthquake which occurred in November, 2006, in Pakistan, 2,564 Cuban doctors worked in mountainous areas during a harsh winter, to treat more than 1.8 million people, for which 34 field hospitals were erected, equipped with modern technology - donated to the country’s health authorities after the eight month mission had been completed.

Another earthquake occurred on the island of Java in Indonesia in May, 2006. 135 Caribbean professionals worked in two field hospitals, providing free emergency treatment to the population.

At the beginning of 2010, a magnitude seven earthquake caused serious human and material damage on the neighboring island of Haiti, resulting in 250,000 deaths and hundreds of thousands of injured. 367 Cuban doctors who had been working on the island since 1998 were present when the event occurred; a number which increased to 1,546 with reinforcements from the Henry Reeve brigade, including young students from 27 countries studying at the Latin American School of Medicine, in Havana.

The situation was worsened by the subsequent cholera outbreak which cost 6,600 people their lives and infected 476,000 others. The doctors, in order to save the greatest number of people, visited homes and explained sanitary measures, traveling to remote and hard-to-reach areas.

According to Haitian health authorities, thanks to the Cuban collaborators, more than 76,000 cholera patients, treated in the 67 field hospitals erected by the brigade, were saved.

THE HISTORY OF CUBA’S MEDICAL SOLIDARITY

During a press conference held in Geneva, Switzerland, on September 12, 2014, addressing Cuban collaboration in the fight against Ebola, Minister of Public Health, Roberto Morales Ojeda, recalled that since the beginning of the Revolution, the country has contributed to improving life expectancy rates in 158 countries around the world, where 595,482 health missions have been carried out.

Over the years, more than 1.2 billion medical consultations have been provided, more than 2.2 million births, 5 million operations and more than 12 million children and pregnant women have been immunised.”

Dr. Margaret Chan, director-general of the World Health Organization, has noted on various occasions that Cuba’s public health system not only strives to maintain ties with patients, but also establishes a strong connection with the research and development processes of the pharmaceutical and biotechnology industries. “It assumes an inter-sectoral focus for the treatment of different afflictions, and government authorities center their efforts on education and health promotion,” she stated during a recent visit to Havana.

Other figures show that more than 54,000 foreign youth are studying medicine, 24,000 of which are pursuing undergraduate studies in Cuba, while 28,000 are members of Cuban medical brigades serving around the world.

Offering help and collaboration to the poorest countries and those in greatest need, has been a constant concern of the Revolutionary government, and in particular Comandante Fidel Castro, thus in 1960, the first international medical assistance was offered to Chile to treat those affected by an earthquake there; then in May, 1963 at the request of the Algerian government a Cuban medical brigade - of 55 collaborators - was sent to the country.

During the 1970s, solidarity assistance was expanded in Latin American, African and Asian countries, and in 1998, in the wake of the destruction caused by Hurricanes George and Mitch in the Caribbean and Central America, the Comprehensive Health Program was initiated, in which 25,288 health workers - in 32 countries - have participated. In Cuba the Latin American School of Medicine was founded, with 24,482 students from 33 countries currently enrolled, who having graduated, return to their communities where they offer medical services.

In their direct fight against death, the human quality of the members of the Henry Reeve brigade is strengthened, and for those in need around the world, they represent welcome assistance.

Henry Reeve was a young man from the U.S. who at 19 years of age left Brooklyn to join Cuba’s independence struggle, during which he became a brigadier-general in the Liberation Army. He was known in Camagüey by his nickname Enrique (Henry) the American, but in the rest of Cuba, by both Cubans and Spaniards, as The little Englishman. He is thought to have participated in some 400 battles, in 10 of which he was wounded, and is recognized for having participated in the rescue of Brigadier General, Julio Sanguily.