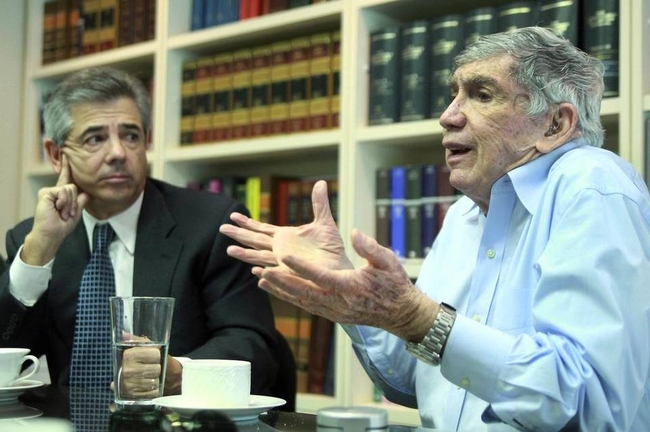 Posada Carriles, accused of masterminding terrorist attacks against Cuba, is free in the US

“We have now pursued in detail with CIA (1) what we know about responsibility for the sabotage of the Cubana airliner and (2) how any actions by CIA, FBI, or Defense attache´s might relate to the individuals or groups alleged to have responsibility,” states the report.

The memorandum concludes that the CIA had previous ties to three of the people "supposedly" involved in the downing of a Cuban airliner, "but any role that these people may have had with the demolition took place without the knowledge of the CIA."

The document details the CIA's links with "individuals allegedly involved" in sabotaging the plane — and specifically cites Hernán Ricardo Lozano, Freddy Lugo, Luis Posada Carriles, Orlando Bosch, Frank Castro, Orlando Garcia, Ricardo Morales Navarrete and Felix Martínez Suárez — but concludes that the CIA had only made contact in the past with Posada, Bosch and Martínez Suárez. Martínez Suárez was not involved in the bombing incident, according to the report's authors.

The document is signed by Harold H. Saunders, director of the State Department’s Bureau of Intelligence and Research and Harry W. Shlaudeman, assistant secretary of State for Inter-American Affairs. It was declassified with a volume of other documents concerning Central America and Mexico, between 1973 and 1976.

The document, which was already part of a redacted collection of documents at the National Security Archive, confirms what the Miami Herald reported in 2007: that Posada was a paid CIA informant and communicated his plans to attack a Cubana plane flying between Panama and Havana on June 21 of that year. At the time, his lawyer Arturo Hernandez, said Posada alerted the CIA so the agency would derail the planned attack.

Another document in the National Security Archive indicates that the CIA reported the bombing plan to other agencies, without revealing the name of its source. The United States did not inform Cuba of the plan, according to Peter Kornbluh, author of the book Back Channel to Cuba, which also points out that the exchange of intelligence information between the U.S. and Cuba did not resume until the administration of Jimmy Carter.

The assessment outlined in the document sent to Kissinger suggests that at the time, the State Department also considered Posada as the mastermind of the bombing plot:

"CIA’s relationship with Posada, who more and more appears to be the person who planned the bombing, could possibly lead to some misinterpretation and embarrassment in that he provided unsolicited information on significant extremist planning, most recently in February and June of this year," states the document, referring to information on plans to assassinate a nephew of Salvador Allende in Costa Rica and to sabotage a Cuban airliner in June 1976.

The report indicates that the Intelligence Bureau did not know why Posada may have volunteered such information, but since his contract as an informant for the CIA had concluded, "He could have been trying to remain in CIA’s good graces, hoping to use the relationship on visa requests and such," the statement said.

"However, it would be at least a possibility that he might have been testing the reaction of the CIA's efforts CORU [Coordinator of United Revolutionary Organizations, an anti-Castro organization set up by Posada Carriles and Bosch] to harass the Cuban government. In this context, we considered the possibility that Posada may have misunderstood the answer to their approaches, but CIA assured us that it could not have been the case. "

The report does not present evidence directly linking Posada to the case. Other official U.S. documents declassified so far do not contain evidence or eyewitness accounts that Posada allegedly planned or ordered to blow the Cubana de Aviacion plane in air.

But that could change with the declassification of more documents, said Kornbluh, a researcher at the National Security Archive of George Washington University, who has tried for decades to verify Posada’s role in the attack.

"The CIA has never released its internal report on the meeting with Posada Carriles. The history of this international act of terrorism is incomplete without these documents," Kornbluh said.

Although internal CIA documents are not subject to regular declassification, "the Obama administration could order it to clarify what happened, in the spirit of more normal relations with Cuba and to leave the past behind," said Kornbluh, adding that the current document "again brings up the issue of how an international terrorist like Luis Posada Carriles can live happily ever after in Miami."

Hernandez, who continues to represent Posada, said Thursday that his client was innocent.

“He passed the polygraph, he had nothing to do with it. He told the CIA of plots to put bombs on airliners.”