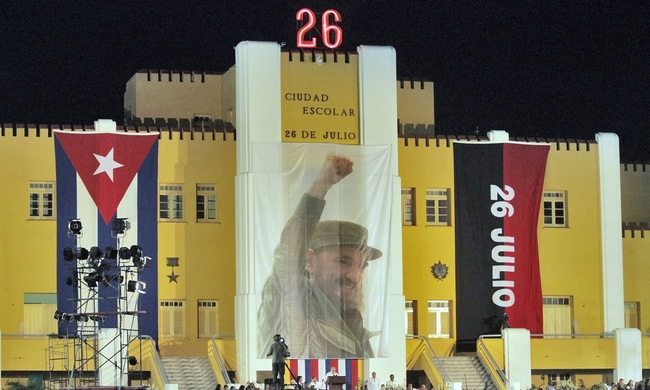 Fidel Castro led the attack along with small group of rebels that sparked the events that ousted the dictatorship of Fulgencio Batista.

Cubans celebrated on Sunday the 62nd anniversary of the first armed uprising launched by Fidel Castro's guerrillas against the army of U.S.-backed dictator Fulgencio Batista in 1953.

A crowd of around 10,000 people attended a ceremony marking one of the most important holidays on the Cuban calendar, today known as the Day of Rebellion.

Cuban President Raul Castro addressed the rally as did Vice President attended Sunday's celebration alongside artistic performances. In his speech, Vice President Jose Ramon Machado Ventura referred to a new era of relations with the U.S but also demanded the ending of the embargo and the return of the Guantanamo Naval Base.

"Now begins a long and complex road toward normalization of bilateral relations that includes among other aspects the end of the blockade and the return of the Guantanamo naval base," Ventura said. R

On July 26, 1953, the struggle against the dictatorship of Fulgencio Batista began when Fidel Castro led a small group of rebels on a mission to take the Moncada barracks.

The attack was routed, and the Castro brothers were captured by government forces. During a court appearance in the aftermath of the event, Fidel famously stated, “history will absolve me”.

Although the assault failed, five years later the Cuban revolution was victorious. Under Batista, 43 percent of the rural population was illiterate and 60 percent of Cubans lived in huts with dirt floors. Today Cuba is free of illiteracy.