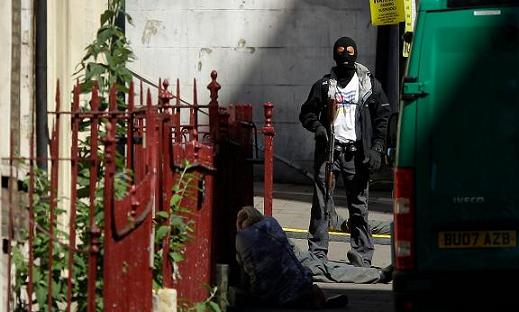 LAST week the Metropolitan Police gave a “sincere and unreserved apology” after dressing its “terrorist” actor in a Cuban flag t-shirt during the simulated attack known as Operation Strong Tower. The apology was issued after the Cuba Solidarity Campaign complained that the choice of costume associated Cuba with terrorism.

Deputy Assistant Commissioner Maxine de Brunner said: “This was clearly a regrettable error, which I take full responsibility for ... There was no intention to cause offence or associate the Cuban people with terrorism.”

Unfortunately this incident cannot be seen as a one-off and must be viewed in a wider context of Cuba misrepresentation and misinformation.

What is seen as acceptable representation of Cuba is different to other countries. One can imagine the reaction if the “terrorist” was dressed in an Israeli, or French, flag.

The cruel irony in associating Cuba with terrorism — as the US government did with Cuba’s inclusion on the State Sponsors of Terrorism list from 1982 up until May this year — is that Cuba has suffered greatly from decades of terrorism.

It has been a US tactic used for the last 56 years as a way of trying to destroy the revolution. Since 1959 Cuba has been a victim of an intense terrorism campaign that has included sabotage, armed invasions, an extreme economic blockade and implacable diplomatic, political and media aggression.

After the failed US-backed Bay of Pigs invasion in 1961, Noam Chomsky states “there was almost hysteria in Washington about how to punish the Cubans. The US launched a major terrorist war against Cuba.”

The film 638 Ways to Kill Castro is widely known of, but, as Chomsky suggests, these kind of plots are just a “very minor part” of US aggression towards Cuba. These outlandish CIA assassination plots distract from the reality of terrorist attacks on ordinary Cuban lives and a vicious blockade which has affected every Cuban on the island and is still in full effect today.

According to the Cuban government, US-supported terrorism against Cuba has left 3,478 dead, 2,099 disabled for life and thousands of others wounded.

With terrorism being central to US aggression towards Cuba, resistance to terrorism has arguably become part of identity in revolutionary Cuba.

The Committees of the Defence of the Revolution were, in part, founded to help deal with the threat of US terrorism.

The Guerrillero Heroico, the iconic Alberto Korda image of Che Guevara, was taken at a memorial for the La Coubre ship terrorist attack which killed more than 100 people.

The Miami Five were imprisoned in the US for attempting to stop terrorist attacks against Cuba emanating from Miami.

Resisting terrorism is therefore an everyday reality in Cuba, but the relentless attacks it has suffered are little-known outside the island.

Chomsky writes how terrorist tactics have included “the bombing of hotels and industrial installations, sinking of fishing boats, poisoning of crops and livestock, contamination of sugar exports.”

Friends of Cuba will be familiar with the 1976 bombing of the Cubana Airlines flight, which killed all 78 people on board — including the Cuban fencing team.

The mainstream media, on the contrary, has spent the last 56 years creating misconceptions and myths about the Cuba, with little reference to terrorist attacks the country has faced.

In a recent interview Ramon Labanino, one of the Miami Five, spoke of the Cubana bombing: “Everyone remembers where they were when it happened, and the million people at the memorial at Revolution Square. It had such an impact, and remains so much unknown outside of Cuba because the international media often ignores it.

In the 1990s there was a wave of hotel bombings aimed at stopping the development of the tourism sector in Cuba which killed and maimed international tourists. It was such acts of terrorism that led to the Miami Five going to Florida to infiltrate the right-wing terrorist groups to prevent future plots.

The Miami Five were arrested and imprisoned under the most brutal conditions, without a fair trial, for trying to prevent attacks against their country.

This is why being on the State Sponsors of Terrorism list was such an absurd insult to the Cuban people. And it’s why the association with terrorism in the Metropolitan Police operation was offensive.

The recent removal of Cuba from the list, as part of the emerging new relations between the US and Cuba, has not changed the ongoing blockade. However, as a matter of justice, it was a victory for the Cuban people.

The freedom of the Miami Five on December 17 last year was a victory for Cuba’s resistance against terrorism and struggle against US interference.

However, despite the change in relations between the two countries, supporters of Cuba should remain vigilant.

The Guantanamo Bay naval base continues to be occupied by the US and has become an infamous image of US aggression, using occupied land as a torture camp as part of its “war on terror.” Despite Barack Obama’s 2008 pledge to close the detention centre, it remains open and the US refuses to discuss the issue as part of the rapprochement.

The US has certainly not abandoned its “regime change” objective and misinformation will continue as part of this agenda.

Cuba should be celebrated for its internationalism, its exemplary health and education systems and its scientific research - the very same day as Operation Strong Tower, the World Health Organisation announced that Cuba became the first country in the world to be eliminate mother-to-child transmission of HIV and syphilis. Cuba continues to show us that a better world really is possible.