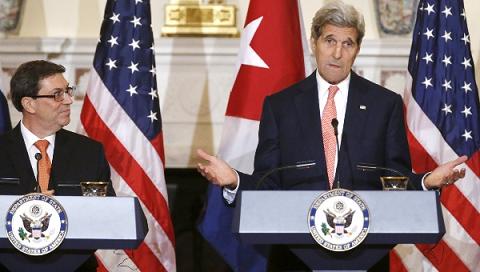 The reopening of embassies is a step towards normalisation between the U.S. and Cuba but the infamous U.S. base in Guantanamo remains a sore point

Celebrations over the reopening of a Cuban embassy in Washington and a U.S. embassy in Havana were muted Monday by the White House’s refusal to give up Guantanamo prison facility.

The Cuban embassy in Washington had been closed since 1961, and its reopening marks the latest stage in a series of steps to normalize relations between the two nations.

However, the U.S. refusal to budge over Guantanamo, one of the most notorious detention centers that "falls under (Cuban) exclusive sovereignty," according to Cuban Foreign Minister Bruno Rodriguez, could lead to a gridlock.

The U.S. secretary of state and Cuban foreign minister gave a joint press conference in Washington Monday in light of the historic reopenings, where more sticking points emerged. Rodriguez commented that the “total lifting of the blockade is essential to advance towards the normalization of the bilateral relations.”

However, hopes for the return of the base remain alive due to the President Barack Obama’s campaign promise of closing the military prison, which is still being pushed before the president’s term in the White House comes to an end.

According to political blog, Politico, a “showdown behind closed doors” is taking place on Capitol Hill, over the approach to this year’s defense budget.

Prisoners are slowly being relocated from the facility, but 116 remain.