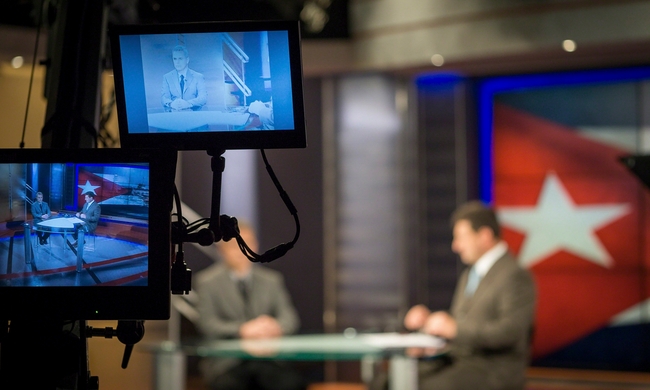 Radio and TV Martí are under pressure to show they are truly effective at providing Cubans with access to a free news, after costing Congress $700m

“Welcome, welcome to 1800 Online!” says presenter Lizandra Díaz Blanco at the start of Radio Martí’s popular interview and call-in show 1800 Online. A few clicks away, TV Martí streams live from the network’s website, with a daily diet of news, comedy and Major League Baseball games – all of it in Spanish, and all directed at an audience in Cuba.

After more than half a century of mutual enmity and distrust, Cuba and the United States are poised finally to restore full diplomatic relations. Foreign ministers Bruno Rodríguez and John Kerry will meet in Washington on Monday to mark the reopening of Cuba’s embassy to the United States. The Cuban flag will once more hang in the lobby of the State Department.

“We are in the front seat of a very important moment in history,” said Carlos García Pérez, director of Martí Noticias, in April, when he addressed the Broadcasting Board of Governors, which oversees all US-funded international news. “More than ever the Martís need to provide Cuba free flow of information so that our audience can make informed decisions as to their future.”

But several obstacles remain in the path to fully normalised relations: a broad economic and travel embargo is still in place, and president Raúl Castro has called again and again for the return to Cuban sovereignty of the US naval base at Guantánamo Bay.

He has also repeatedly insisted that the US close down Radio and TV Martí.

And as relations improve, the stations – which have cost Congress more than $700m during the last three decades – are under pressure to show they are truly effective at providing Cubans with access to a free press.

Radio Martí was launched in 1984, at the height of the cold war. According to Dr Daniel C Walsh, author of An Air War with Cuba: the United States Radio Campaign Against Cuba, the station’s creation was the result of President Ronald Reagan’s concern over “communist influence” in the Americas. “He attributed a lot of that to Cuba and he thought one way to counter that would be to create a radio station,” Walsh said.

The station was born with a mission similar to that of Radio Free Europe and Voice of America: to broadcast independent reportage that might just destabilize a regime opposed by the United States. Its name was inspired by the Cuban national hero José Martí, a darling of the communist government and dissidents alike.

In the early days there were strict editorial guidelines: Radio Martí would never refer to Fidel Castro with the loaded word “dictator”. But the mood changed after the 1989 fall of the Berlin Wall left Castro bereft of powerful supporters.

TV Martí was launched a year later. “It was a complete disaster,” said Walsh, because Cuban authorities jammed the broadcasts and few Cubans saw it.

“TV Martí has never had a useful reach to Cuba,” said John Spicer Nichols, professor of Communications and International Affairs at Pennsylvania State University, who has been deeply involved in the congressional debate over the stations. “All the Cubans have to do is sneeze on it and it’s entirely disrupted and unusable.”

The TV station was creative in its attempts to reach Cuba. It even flew a plane dubbed “AeroMartí” over the island, but according to Don Mansfield, who was technical director at the radio station for 17 years, it failed to penetrate Cuba’s signal-jamming.

“The television, to my knowledge, never got through,” said Mansfield. “They would’ve been better to bomb Cuba with bales of fifties.” AeroMartí now sits in unused in a hangar for almost $80,000 a month.

Radio and TV Martí continue broadcasting, but as Cuba approaches its own “Berlin Wall” moment critics say that it is unclear what the point of the stations is.

For a start, nobody really knows how many Cubans are actually listening to the stations – either on air or online.

“There’s no way for doing real audience measures on the island, because of the Cuban government’s regulations and the inability to get access to the island,” said Natalia Crujeiras, chief content officer for Martí Noticias.

An independent survey in April found that 20% of Cubans had listened to Radio Martí in the last seven days – but interviewees were twice as likely to have listened to Cuban state-run stations.

The study – carried out by the research firm Bendixen and Amandi, in collaboration with the Washington Post and Univision – found that the majority of Cubans get their news from TV.

TV Martí is still experimenting with new ways to reach its target audience. It produces 16,000 DVDs and flash drives a month loaded with newscasts, documentaries and sports reporting to distribute on Cuba’s informal unplugged internet, from which just 3% of Cubans get their news. Crujeiras said this has been a success.

Access to the internet remains severely restricted – Cuba has some of the lowest levels of connectivity in the world – but things are slowly beginning to change. Earlier this month the Cuban government launched 35 Wi-Fi hotspots across the island, and – hopeful that more and more Cubans will be getting online – Martí is shifting its focus to the internet.

But analysts say it’s unlikely the US-funded site will be able to compete with privately owned or Cuban state-run publications.

Martí Noticias officials report that visitors to its website have increased 1,000% in the last two years and that on average they get 18,000 visits a day. But 50% of these are from within the US.

Hugo Cancio, owner and publisher of On Cuba, said, “As far as we know, we are the second most read website in Cuba.” This follows the Cuban state-run Cuba Debate, which saw over four million visits from the island in the last three months. Alongside CNN, On Cuba has the only American news bureau on the island. “Our job is to report the news as fair and as truthful as we can,” said Cancio.

The US Broadcasting Board of Governors has proposed merging Martí with Voice of America Latin America to form a Spanish language complex that will cost $30.32m a year. The move would mostly be cosmetic as Martí Noticias costs $27m annually and VOA Latin America only $4m.

But some predict Martí will continue to broadcast so long as the Cuban government denies its citizens freedom of information. Ken Oliver-Mendez, a former Martí producer, said, “The mission of Radio Martí is far from accomplished. So this is the time to strengthen it, not weaken it.”

Others believe it’s time for the Martís to finally close. “What is in the best interests of the Cuban people?” said Nichols, the Martí expert and professor at Pennsylvania State University. “It’s a slam dunk: You close it down.”