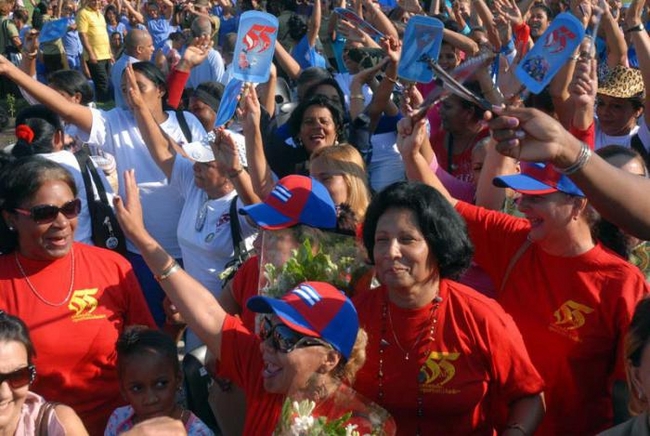 BAYAMO, Granma— President Rául Castro sent heartfelt congratulations to women across the island on the 55th anniversary of the Federation of Cuban Women’s founding (FMC).

His message was conveyed by the organisation’s secretary general, Teresa Amarelle Boué, also a member of the Party Central Committee, during the national celebration of the anniversary in the province of Granma, which was chosen as the event’s site in recognition of the FMC’s accomplishments in the region.

Amarelle Boué commented that Raúl’s congratulations reinforced the commitment of Cuban women and insisted that the FMC would continue to guarantee the unity of women in the defense of the Revolution.

Making the central remarks at the celebration was Olga Lidia Tapia Iglesias, member of the Party Central Committee, who recalled that the organisation, founded August 23, 1960 by the Revolution’s historic leader, Fidel Castro, and heroine of the city and mountains Vilma Espín, had as its principal objective, from the very beginning, the full incorporation of women into all walks of the country’s social and economic life.

Among the FMC’s accomplishments, Tapia emphasised the establishment of childcare centres; modern legislation protecting children; the development of sex education; progress in the realm of labour and wages; and an important role in drafting the country’s Family Code.

She noted that women today constitute 48% of those employed in the state sector, 66% of technical professionals, and 53% of scientists.

The FMC has also contributed to increasing the number of women in leadership positions, she said, noting the important fact that 48.86% of National Assembly deputies are female, one of the highest proportions in the world.

During the anniversary event in Bayamo, the province of Granma was awarded the National Vanguard flag, while the provinces of Guantánamo, Santiago de Cuba, Artemisa and Villa Clara were recognized for their outstanding work.

In the Segundo Frente municipality of Santiago de Cuba, the continued relevance of Vilma Espín’s thought and actions was reasserted and honored on the anniversary of the FMC, to which she devoted a great part of her life.

A floral wreath was laid at the spot where her ashes rest, at the Frank País García Eastern Second Front Mausoleum, in the name of all Cuban women, as the culmination of a commemorative event led by local FMC leader Yitsi Torres Reyes, who reiterated the organisation’s permanent commitment to continuing the work of the its eternal president.