Long and contentious history stands in the way of normalisation 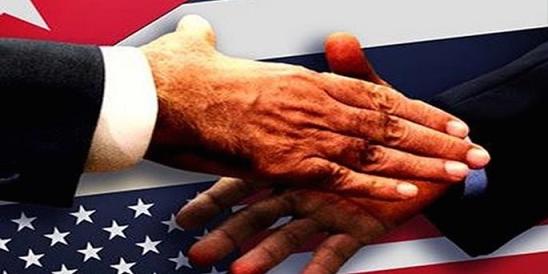 President Obama’s surprise announcement last December to normalise relations with Cuba has produced a flurry of media interest in this island nation that has been off-limits to Americans for more than half a century. Much of the coverage has focused on the arduous negotiations that have transpired in the effort to re-establish a level of discourse between the long-time adversaries.

While concrete accomplishments have been attained, including the opening of embassies in Washington and Havana as well as the removal of Cuba from the specious list of state’s that sponsor terrorism, the discussions have been frustratingly slow and challenging, regularly mired in misunderstanding and misperceptions. The root of the problem is unquestionably determined in the long and contentious history between the stubborn little socialist enclave and the capitalist giant to the north. That past, unlike how the mainstream U.S. media usually reflects upon it, cannot be viewed solely through the window of the 1959 revolution when Fidel Castro overthrew the Batista dictatorship along with American hegemony. In order to attain a precise understanding of why the two sides consistently talk past each other as they struggle to reach consensus, a more rigorous historical examination is required.

To start, it is imperative to understand that Batista was the means and not the ends; a concept almost universally misunderstood by the American political and media elite who concern themselves with Cuban matters. The purpose of Castro’s revolution was to establish true Cuban independence; a still noble goal regardless of how one feels it has turned out. Batista provided the symbol, as the American-supported dictator became the lightning rod for everything that was wrong and corrupt with pre-revolutionary society. Under American authority Cuba was permitted to sink under the weight of an economic and social system that put foreign interests first, at the same time debasing the political process to the extent that it tolerated a strongman like Batista to brutalise the population. The fraudulent conditions that characterised the Cuban reality created Batista – and he took full advantage of it.

It should also be remembered that Castro was but one element in the anti-Batista movement of the late 1950s. Other organised opposition wanted Batista removed but were willing to acquiesce to the perpetuation of American dominion. Concurrently the powers in Washington reluctantly realised the inevitability of replacing Batista, as long as it was with another strongman still under their control. Castro, however, was an obdurate nationalist whose vision was radicalised by his own intransigence reacting in synchronicity with America’s imperial hubris that could not comprehend the dynamics of the young revolutionary’s historical awareness. Castro’s early inclination to negotiate with the United States soured when his national policies, initiated on extensive rural land reform, defied American power structures in a country they felt very much their own. Within but a few months of the triumph, those American interests made it clear the revolution had to go.

Strategies to achieve that included isolation, economic punishment, non-stop propaganda, the creation of an artificial internal dissident faction and an unknown war of terrorism against the Cuban population, all in order to create conditions so terrible the citizens would rise up and throw out their own government. Many of those policies and objectives remain to this day.

So while Batista became the rallying cry that ended in Castro’s vision of national autonomy, the original shout for Cuban independence was heard 100 years prior, during the first conflict against the Spanish in 1868. Ten years later the war was lost to the revolutionaries, but they took up the struggle again in 1895, which led to the direct involvement of the United States military. This begins the critical divergence of Cuban and American historiographies.

The American mythology sprung from the belief that the Cuban independent fighters were urgently calling for U.S. assistance, nobly responded to, resulting in Spanish defeat and the island’s liberation. Not unpredictably, the American side considered their six-week intervention to be more important than the three-year struggle of the rebels, and having expended considerable blood and treasure, expected to be accorded their just due. To extract what was owed, America imposed a military occupation for three years from the end of the war in 1898, during which time the liberators established economic and political structures for their own benefit, lasting until Batista’s downfall.

From 1902 to 1959 those institutions included a Cuban Republic and multi-party political systems, all under the guidance, control and arbitration of the power brokers in Washington. The United States brought political democracy and economic modernity to what they considered the intellectually unprepared and emotionally indisposed Cubans, thus entrenching the concept of benign intervention, a short turn from vilifying the excesses of the Castro revolution and his ending of all the perceived benefits America imposed.

From the Cuban historical perspective, the nationalists purport the Americans had been determined to take control of the island since the Monroe Doctrine of 1823. The chance came in the final stages of the 1895 second rebellion against Spain, with the U.S. side intervening just as the Spanish colonial power was prepared to concede independence to the rebels. While the assistance was appreciated and significant, the expectation was the Americans would leave the Cubans to their victory, as was politically stated by such legislation as the Teller Amendment. What was not welcome was the United States prohibiting any Cuban representation at the Treaty of Paris peace talks that determined the conditions of the Spanish defeat. Less acceptable was the military occupation and the imposition of the onerous Platt Amendment that established the ground rules for decades of American domination, circumventing the establishment of authentic Cuban self-determination.

These two discourses contain the minor similarities and major differences that naturally occur when forcing chronological events to conform to ideologically opposed viewpoints. Nowhere is that more evident than in the immediate aftermath of the revolution, resulting in the flight of those who had supported and benefitted from the American directed Batista regime. It was this influential first generation of anti-revolutionaries that shaped both the fiction of Cuba in the 1950s and the demonisation of the Castro regime. With American endorsement, the exiles declared that since Havana compared favourably to some first-world social indices, the revolution triumphed solely due to Fidel’s base duplicity combined with ruthlessly oppressive civil controls, forcing an unsuspecting citizenry into the arms of the Soviet Union.

Conveniently ignored is the utter desperation of the rural Cuban population, where revolutionary support still remains the strongest, and the overwhelming aspiration for an authentic national identity. Also disregarded is the actualisation that the revolution traded Soviet security and economic integration to ensure the idealisation of sovereignty – a consequence designed and anticipated by policy makers in Washington in order to easier denigrate Castro as a dangerous communist adherent residing right on America’s doorstep.

America saw Cuba’s revolution as a defiance of its Latin American hegemony, and so defined it as anti-democratic, communist and dictatorial. Cuban revolutionaries saw their fight as an assertion of its own history and a rejection of U.S. neo-colonialism, by its very designation anti-capitalist.

Until those divergent perspectives are placed in their proper historical context, negotiations for the future of normalisation will remain elusive, complicated and needlessly problematic. Resolution will continue to be challenging on issues such as ending the embargo and permitting two way trade (not just increasing U.S. exports), terminating the funding for regime change programmes, lifting all travel restrictions for Americans, permitting Cuba access to international financial institutions, charges of human rights violations, settlement of compensation claims and the continuation of America’s possession of Guantanamo Bay.

Intuitively it should be the American side that should move the furthest towards reconciling the two historical accounts, if only to acknowledge Cuba’s right to establish their own national mythology. Cuban revolutionary tradition was delayed for 60 years under American hegemony, during which time the U.S. version was imposed on the nationalist side. No other country would think of telling the United States that their revolutionary history is illegitimate, much less dare to impose economic sanctions and unrelenting hostility to suppress and deny that historiography. The United States has been pursing such a strategy against the island since 1959; to do its best to ensure Cuba’s version of its own historical events is discredited and repudiated in those rare occasions when it is heard by the American public.

Despite the pronouncements of respect by those working to finalise the normalisation process, Cuba’s position has often been disparaged by the American negotiators. Until there is a basic understanding of the other side of the story, then negotiations will continue to be problematic. The Americans, however, have never been good at admitting Cuba has the right to its own historical interpretation, much less the legitimacy of its contrary social/economic system. The Cubans have simply longed for a relationship that recognized their country’s sovereignty and dignity.

Now that both Washington and Havana are committed to normalisation, it is imperative to establish common ground. The art of negotiation is designed to resolve discrepancies; and the long-entrenched differences present a particularly difficult challenge. Without at least the attempt to reconcile these conflicting historical versions and stop talking past each other, true normalisation will remain an elusive goal.

Keith Bolender is a freelance journalist author of Cuba Under Siege (Palgrave 2012); and Voices From the Other Side; An Oral History of Terrorism Against Cuba (Pluto Press 2010), both are available from the CSC Online Shop.

He will be appearing at the Cuban Futures Conference on Saturday 3 October at Congress House in London and will be on a national speaking tour between 23 September - 3 October.