The noble profession of restoring sight 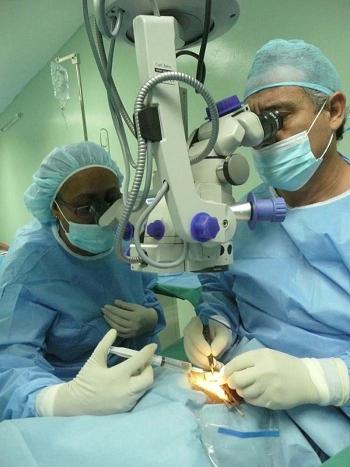 11 years of Operation Miracle: When the gratitude is infinite, fatigue can not break the will of the men and women who daily restore sight to tired eyes

CARACAS, Venezuela— At first glance, it does not seem reasonable that the faces of almost all the patients entering this operating theater, with its knives, syringes and smells, are full of joy. And what’s more they leave even happier, sometimes crying with delight.

Other than the red brick of its exterior, nothing simulates a sanctuary environment at the José Leonardo Chirino ophthalmology center in the port city of Barcelona. Despite being a well-equipped modern clinic, nothing will erase its reputation as a “miraculous place” as it is recognized throughout eastern Venezuela.

However, all the work that goes on belongs to earthly hands. Here, Cuban doctors, nurses and technicians restore sight to tired eyes, and deserve the gratitude of those smiles, seen daily.

Exactly 11 years ago an agreement between Cuba and Venezuela established Operation Miracle, with this center founded four years later, in which over 50,000 have since been treated.

People pass to and fro across the waiting room, but they are barely visible to Cardina Tapiero as she has one eye covered, while Danilo Méndez has one under the effect of anesthesia.

The Colombian smiles, “because the pterygium doesn’t bother me anymore, thanks to God and these blessed Cubans”; while the 88 year old man beside her says he will finally be able to read the book he’s been guarding at home on the bearded leader: “All my life I admired Comandante Fidel. I was one of those in 1958, here in Venezuela, who gave a bolivar for the struggle in the Sierra. Now I want to go, because if before there were things to see, now I'll see even more, once the Cuban doctors operate on me.”

Once in the operating theater all is silent. The patient does not dare speak, frightened by the sounds of the instruments. He swallows nervously, they tend to him on the operating table, and as the tension seems to reach climax, the doctor breaks the suspense jokily asking: “Is this the mute patient? Good Morning. Oh, no, no he isn’t mute. Don’t worry, old guy, all will be well,” and the concert of blades, needles, lasers and implants begins.

Carlos Díaz from Holguin, is the surgeon on duty. He’s spent two and a half years in the same surgery chair, and his hands can no longer count the number of patients he’s seen. “Thousands. Just imagine, there are 16, 18, 20 cataracts per day, which is the operation with most impact. There are people who arrive totally blind, and with us they discover the light again.”

“The best thing is the gratitude they feel when leaving. Note that there are is no postoperative service here, but people come back, they come seeking whom operated on them. I have had to set aside some time in the morning, before entering the theater, just to see those returning to give thanks.”

“Venezuelans are very religious people, and put their god above all else. The great thing is that they put us at almost the same height: thanks to God and to you, the Cubans, they say, and that's enough.”

Mercedes Pérez, the scrub nurse, is the right hand of Carlos in the operating theater, and although she wanted to keep the names of the most moving stories anonymous, they have been so many that she was happy to tell.

“Once a lady who didn’t recognize her grandchildren arrived. She came in almost praying for a miracle, and at the end of the operation, when the doctor turned off the spotlight, she was bursting with joy: Oh, I see your faces, how beautiful they are, and now I will be able to see my grandchildren, finally!, she said, and began to cry. We had to comfort her, wait a while to bandage the eye.

"It's amazing to see how these things which in Cuba seem ordinary, are viewed as a miracle here. Many people do not understand how something so wonderful can be free, and also offered with so much love. They do not know, really, how to thank you, and that is fulfilling.”

Others working here have similar stories - Ernestina Cepero, Marlenis Martínez, the anesthetist Caridad Pioto. All at some point have been moved to their very souls by the gratitude they have received from others. The days are exhausting, “there are days when I am tired,” Carlos says, “but I think of what it means for each patient and my energies return, just like the first day.”

Usually, the routine is divided into two sessions, the surgery and then the removal of the bandages. This latter role has almost always fallen to Mariselis García, from Las Tunas, who expresses some of the best emotions.

“Sometimes I think I won’t bear it. My eyes fill with tears on seeing the immense happiness of the patients, especially those who before the operation saw nothing.”

“Just yesterdaya man came, a senior, andhe was left speechless when Iremovedthe bandage.He stood up slowlyand walked over to the picture of Chávez on the wall. He smiled broadly and couldn’t contain himself,and he burst out crying.”

I didn’t have to wait long to witness these moments for myself. The patient's name was Héctor Villarena and he was shown in by his daughter on one side and his little grandson on the other.

“It’s been a long time since he saw him. The cataracts covered his entire view when the boy was just a baby,” María Gabriela explained.

The first thing Héctor did on having the bandages removed was to look for the little one: “But I can see you clearly, boy, look how much you’ve changed, come over here...”, and he squeezed his grandson tight.

Mariselis finished checking him over with one last test: “Do you see me well?” and the patient, brimming with joy and looking her up and down, confirmed cheekily: “Yes, I see you, and you look good.”

All eastern Venezuela has heard about these Cuban men and women who bring light. There is no one who doesn’t know of the “miraculous”, and they come from far and wide, from the city of Barcelona itself and remote areas along the Delta, where the Orinoco River flows into the sea.

“Two things, Mr. journalist,” Carlos concluded: “First, to acknowledge the professional fulfillment that this immense labor of love has provided me. And second, I have no religious training; but I must say that to deserve such gratitude from others, if God exists...he is definitely with us.”