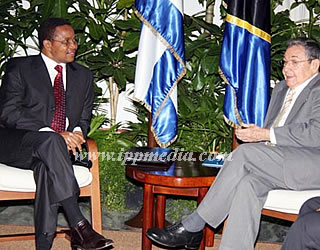 Cuba "did not only give us fish but also taught us how to fish"; Tanzanian President

The inauguration was led by Ethiopia’s Prime Minister, Hailemariam Dessalegin who is the Chairman of African Leaders Malaria Alliance (ALMA).

The president said construction of the factory, the Tanzania Biotech Products Limited, is a major step in the fight against malaria and expressed his own eagerness to see it up and running.

The president cited the World Health Organisation (WHO) 2014 report that highlighted 584,000 people worldwide die from malaria every year and 90 per cent of the deaths occur in Africa.

“In those figures, most of the victims are pregnant women and children under the age of five years,” the president decried.

“Tanzania has done a lot to learn from the experience of other countries on how to best eliminate malaria and we got it from the Cuban government,” the president noted.

“We now declare the war against mosquitoes and their larvae,” declared the president.

President Kikwete was also keen to point out that the malaria infection rate in the country has decreased from 18 per cent in 2007 to 10 per cent in 2012 and the number of deaths are estimated to have gone down by 71 per cent and new cases have dropped by 51 per cent.

He thanked the Cuban government for the support given to Tanzania saying "they did not only give us fish but also taught us how to fish".

The president directed the Prime Minister’s office to put in place plans to ensure the anti malaria pesticides produced at the plant is distributed countrywide.

The technology was introduced by the Cuban firm Labiofam and the construction of the factory was full funded by the Tanzanian government to the tune of 61.5b/- Tanzanian Shillings.

On his part, the visiting Ethiopian Prime Minister, Hailemariam Dessalegin promised to champion other African countries to buy anti-malaria biolarvicides that the plant will produce.

“The plant is important for other African countries as well...Tanzania has made tremendous efforts in the fight against the killer disease and other nations be benefitted,” The Premier said.

“I am very happy today to learn how Tanzania is working hard in the fight against malaria, this is a huge step that other African countries should copy,” stressed the Prime Minister noted.

He said inauguration of the factory will open doors for other countries to be able to import the products produced from the factory.

“Reduction of malaria infections in Tanzania is a sign of good leadership and efforts to see that the disease is eradicated,” the envoy said.

“The plant will save millions of lives that would be lost to malaria and it is a true symbol of progress made in the fight against the disease,” he added.

Chairman of National Development Corporation (NDC) and Board of Director of Labiofam, Chrisant Mzindakaya was optimistic that thanks to the factory, Tanzania will soon be a malaria free zone.

“The factory will be capable of producing six million liters per year and about 145 Tanzanians will get employment,” he explained.

“The plant will make Tanzania one of the leading countries worldwide in the fight against malaria,” he said.

According to Mzindakaya, NDC acquired a loan of 61.5bn/- Tanzanian Shillings from the government citing that while Cuba brought the technology, the factory was built by NDC through the government of Tanzania.