Obama: We don't have to be imprisoned by the past 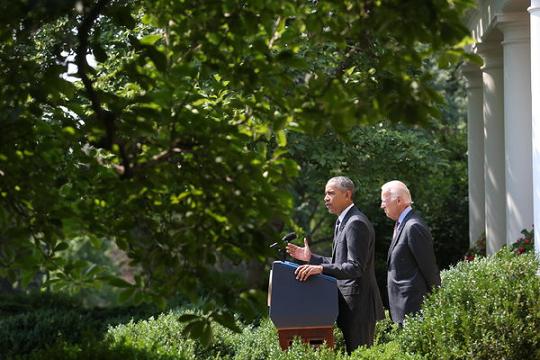 THE President of the United States, Barack Obama, announced on July 1 that the agreement on reestablishing diplomatic relations and opening embassies in Havana and Washington would allow his country to open a new chapter with its Latin American neighbours.

Obama insisted that the policy of attempting to isolate Cuba through the blockade had not worked and that the United States had been isolated from the rest of the countries of the hemisphere.

He added that nobody expected, in 1961, when diplomatic ties were cut, that it would take over half a century to re-establish them, given the proximity of the two countries and the deep cultural and family ties that unite them.

The President acknowledged the differences that persist between the two governments, but said that the progress achieved demonstrated that “We don't have to be imprisoned by the past.”

Diplomats have been working hard since January in the various rounds of talks to polish the details of this agreement, Obama recognised, while confirming that Secretary of State, John Kerry, will travel to Havana to raise the U.S. flag at the same building which up until the middle of the last century functioned as an embassy and since the late 70s has served as the U.S. Interests Section.

The U.S. President said the opening of the embassy is not a merely symbolic act, but will allow for further contact with Cubans and more personnel on the island.

He also said that it will enable progress on issues of common interest such as the fight against terrorism and development policies.

Obama said he was convinced that the best way to defend U.S. interests is through direct engagement with the Cuban people and he defended the measures taken thus far to eliminate some of the restrictions on travel and trade with Cuba.

“We’ve already seen enormous enthusiasm for this new approach,” since the historic announcements regarding a change of policy on December 17 last year, he noted.

Obama explained that many U.S. citizens are interested in travelling to the island, businesses in investing and universities in expanding exchanges.

He added that several leaders have expressed support for the change in policy from the White House and public opinion polls show widespread support.

In the case of Cuba it is “a choice between the future and the past,” Obama said after calling on Congress to lift the blockade against Cuba.

He noted that they have already seen bipartisan efforts to advance the legislation to eliminate this policy that “only makes life worse for the Cuban people.”

However, he stressed that there are still people who want to turn the clock back and return to the failed policies of the past.

Obama concluded his speech with a quote from Dwight D. Eisenhower, the U.S. president who broke off relations with Cuba on January 3, 1961, referring to the belief that these would soon be restored.

“Well, it took a while, but I believe that time has come. And a better future lies ahead,” he assured.