Solidarity from Cuba for Ecuadoran brothers and sisters 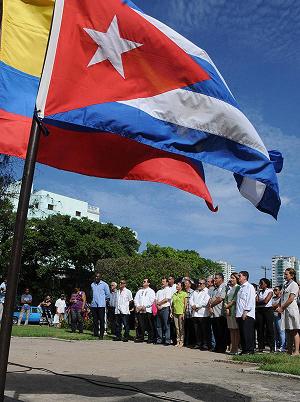 Cubans support Ecuador’s Citizens’ Revolution, as demonstrated in a ceremony held in a central avenue of Havana, in front of the monument to General Eloy Alfaro, former president of this South American nation.

Before a large group of intellectuals, Ecuadorans resident in Cuba, government officials, and representatives of different political and mass organisations, Dr. José Rubiera, on behalf of the Friends of Ecuador Parliamentary Group, stated: “We strongly defend the right of every country to choose the political, economic and social system that it deems most appropriate. Respect for the law and the legislative tasks that correspond to each people's assembly as the highest representative of sovereign will, that is of the people. We do not accept foreign interference.”

The Deputy expressed his support for the important political and social changes that President Rafael Correa has implemented in favour of the previously excluded majority, while explaining that the violent protests seen in the South American country since June 8 demonstrate the desperation of right wing sectors, which seek to reverse progress made in Latin American and Caribbean integration in which the Ecuadorian people and government have played a key role.

Meanwhile Kenia Serrano, president of the Cuban Institute of Friendship with the Peoples (ICAP), noted that the response to the proposal for a law on wealth redistribution and inheritance tax has been manipulated through negative and malicious interpretations, with sectors of the oligarchy and the traitorous opposition determined to spark chaos and instability across the country, in their endeavor to overthrow the government of the Citizens’ Revolution.

“We denounce,” the ICAP President and deputy continued, “this coup attempt that appears to repeat, as stated in the Statement by our Revolutionary Government, the same destabilisation script used against other progressive governments in the region, which of course is doomed to failure, for we have demonstrated that the more aggression (we suffer), the more endurance, more dignity and more integration.”

Participants at the event provided personal statements to Granma International.

Andrés Zaldivar Diegues, vice president of the Union of Historians in Havana, told Granma International that those behind the violence in the homeland of Eloy Alfaro form part of “a reaction nursed, funded, directed from the White House in Washington, in its confrontation with the progressive governments of the world. Venezuela has been its main objective, but Bolivia has also suffered, because they represent the emancipatory feeling of these new times of liberation.”

Retired Mayra Alvarez Corredera, a nearby resident of the monument, said she felt great admiration for the Ecuadoran people and their government. “I note a very brave attitude from President Rafael Correa on withdrawing the draft laws to prevent violence. However, encouragement from outside calling on Ecuadorans to commit criminal acts persists, resulting in an attempted coup d'etat.”

María de los Milagros Avella Pérez very firmly stressed: “The Cuban people support the Ecuadorans, just as we stood alongside the Venezuelans. Likewise we have felt the same sense of solidarity and support from them for our causes. I want to convey to President Rafael Correa that he can count on us Cubans in his struggle for a better world.”

Ecuadoran doctor, Pablo Arellano Tapia, who graduated from the Latin American School of Medicine in 2009 and is undertaking an ophthalmology residency at the General Calixto García University Hospital, said: “Young people are waking up in this wave of liberation struggles and we have realized that we are part of a change, witnesses to the revolutionary process. Today we can not be confused and allow them to mislead us. We must seek the truth, push forwards, and anywhere in the world where we may find ourselves, we must state, here we are!”

As the act drew to a close, Édgar Aníbal Ponce Iturriaga, Ecuador's ambassador in Havana concluded: “In particular we thank the Cuban Revolution, its leaders and its people, for the firm and unconditional support at this very moment when oligarchic groups supported by the press, social networks, and the mass transnational media intend to discredit the legitimate government of my country, generate a crisis and unleash violence in such a stable and peaceful nation as Ecuador.”