An arugula-growing farmer feeds a culinary revolution in Cuba 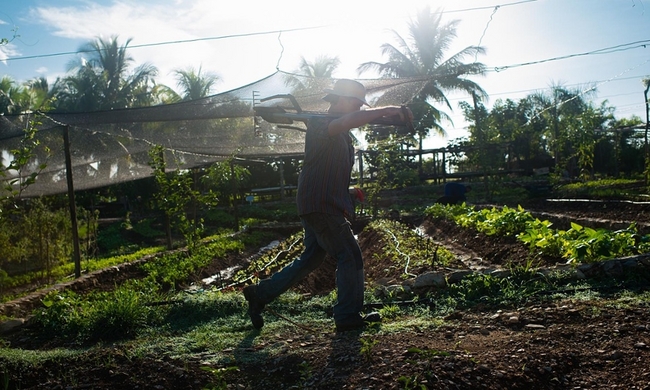 Like all homestead stories, Fernando Funes Monzote’s starts with an epic battle against harsh elements and long odds. Funes, a university-trained agronomist, settled on a badly eroded, brushy hillside outside Havana four years ago and began digging a well into the rocky soil. The other farmers nearby thought he was crazy, or worse – a dilettante with a fancy PhD whose talk of “agroecology” would soon crash into the realities of Cuban farming.

Funes had no drill, so he and a helper had to break through layers of rock with picks and hand tools. Seven months later and 15 metres down, they struck a gushing spring of cool, clear water. “To me, it was a metaphor for agroecology,” said Funes, 44, referring to the environmentally minded farm management techniques he studied here and in the Netherlands. “A lot of hard work by hand, and persistence, but a result that is worth the effort.”

Today Funes is one of the most sought-after figures in Cuban culinary circles. Finca Marta, the eight-hectare farm he named in honour of his late mother, supplies organic produce to many of Havana’s top-rated “paladares”, the privately owned restaurants that are transforming the island’s reputation for uninspired dining. Funes grows more than 60 varieties of vegetables, fruits and herbs in carefully terraced planting beds designed to conserve water. He’s planted woody shrubs to divide his cattle pastures with “living fences” that also provide habitat for birds. His beehives yielded 1.5 tonnes of honey last year. The farm and its irrigation systems run almost entirely on solar power, and Funes operates a “biodigester” that captures methane from manure and pipes it right to the kitchen stove where it burns clean and blue.

Funes’s vision of Cuban agriculture is radical, because it’s a throwback. He advocates smart, resource-efficient artisanal farming as an alternative to both capitalist agribusiness and the disastrous state-run agricultural model implemented in the 1960s, whose legacy is a country that imports 60% to 80% of its food.

With Cuba restoring relations with the United States and looking to reinsert itself into the global economy, Funes sees the very survival of Cuban rural culture at stake.

His goal, he says, is to give Cuban farmers a way to make a living at a time when so many have given up on it and moved to urban areas. “If we don’t want foreign companies to come in and dominate Cuban agriculture all over again, that means we need to give Cuban families a way to stay on their farms,” said Funes, who grew up at an agricultural research station where his father, a crop scientist, and his mother, a biologist, both worked.

Twice a week Funes stuffs his old Russian Lada car to the roof with Italian arugula, cherry tomatoes, endives and bean sprouts and delivers fresh greens to more than two dozen restaurants in the capital. Such items are virtually unknown to most Cubans but increasingly sought after by chefs catering to tourists, foreign residents and a small but growing segment of Cuban consumers who are looking to break out of the pork-and-plantains routine. “More and more Cubans are discovering these vegetables and learning to broaden their horizons a bit,” said Alain Rivas, the head chef at El Litoral, a two-year-old cafe along the oceanfront Malecón boulevard, one block from the US embassy, that offers fresh organic salads with ingredients from Funes’s farm. At $8 to $10, the salads are well beyond the means of ordinary Cubans, but Rivas said many of his customers are local.

Rivas often plans his menu by talking first to Funes, a level of farm-to-table coordination that is also unheard of here. A few years ago, barely anyone in Cuba had mobile phones. Now Funes keeps in touch with chefs, restaurant owners and other customers by email and text message and says better planning minimises waste.

Most Cuban farms don’t work this way, overproducing crops with the expectation that much of their harvest will be lost because they don’t have the means to reach markets quickly. This approach yields a glut during the winter growing season, crashing prices. Then high-demand vegetables, such as lettuce and tomatoes, go scarce again during hot summer months when crops quickly spoil under the broiling Caribbean sun and growers don’t want to risk the losses.

“Part of the problem could be solved by more efficient distribution and coordination,” Funes said. The other part, of course, is better access to equipment and technology.

In recent years, Cuban President Raúl Castro has transferred millions of hectares of unproductive state land into the hands of private farmers and cooperatives in an attempt to reduce food imports. But the results have been underwhelming. There’s a greater abundance and variety at produce markets, but prices have mostly increased, in part because so many intermediaries are involved.

Cuba’s crushing agricultural bureaucracy still makes it essentially impossible for farmers to import tractors, trucks and other agricultural equipment that could boost production and cut costs. Government pledges to create wholesale markets for tools and other farming supplies have yet to materialise.

Funes would like to upgrade his Russian car to a refrigerated truck. He’s adding a maternity home to his delivery route as part of his expanding social mission and wants to begin distributing a weekly produce basket to individual families. He said he doesn’t need more land and can increase his harvests simply by more intensive methods. And he’s more interested in getting other Cuban farmers to adopt better practices and try a little agroecology in their fields.

“It doesn’t matter what you call the system,” he said. “What matters is the use of natural resources and the possibilities you can provide for farmers to make a living and remain rooted on their land.”