This article is based on a report from Cuba Debate | Friday, 4 September 2015 | Click here for original article 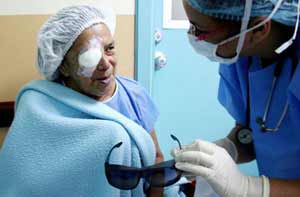 The Cuban 'Operation Miracle' mission in Paraguay surpassed 5,520 eye surgeries performed in the course of this year today.

This is another contribution to the effort the brigade is making towards the eye health of the Paraguayan people, said Carlos Alberto Perea, head of the group of collaborators.

With this, another link in the chain is devised to achieve its commitment to surgically benefit in late 2015 about 3,000 patients with limited economic resources of this brother country, he noted.

This figure was applauded at the Maria Auxiliadora Ophthalmological Center by the Cuban collaborators, who were collectively recognized, especially the staff of the operating room, Dr. Perea said.

He thanked the patients for the examples of gratitude that are daily expressed to them, and confirmed the commitment of the brigade to continue working tirelessly together with the Paraguayan people in this humanitarian work.

The brigade recently celebrated one decade of work in this nation, the first two years dedicated to sending patients to Cuba for treatment, as a result of the agreement between the respective Ministries of Health in this subject.

Cooperators are providing care to low-income people, who receive in general consultations testing glasses and intraocular lens calculation, laboratory research, surgeries and hospitalisation (patients and companions) with diet and delivery of free medicines.

The Miracle Mission or Operation Miracle is a project started on July 8, 2004 at the initiative of the historic leader of the Cuban Revolution, Fidel Castro, and late Venezuelan President, Hugo Chavez. It has treated over 4,000 people in Latin America, Asia, Africa and the Caribbean.