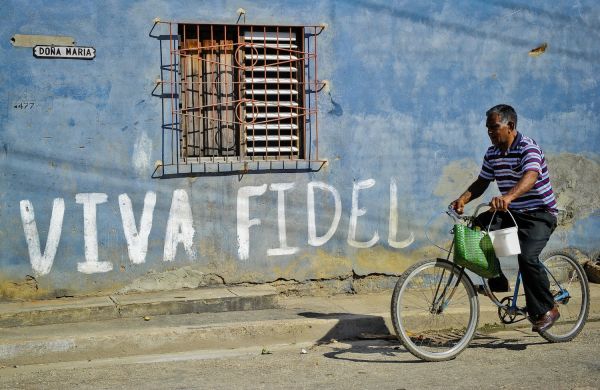 The flag-raising ceremony at the U.S. Embassy in Havana marked the successful conclusion of what Cuban Foreign Minister Bruno Rodríguez called the "firsts stage" in the process of normalising relations.

Myriad other issues still divide Washington and Havana, but none is more consequential that the U.S. economic embargo -- or, as the Cubans call it, el bloqueo, the blockade.

Since President John F. Kennedy imposed it in 1961, the embargo has been the centerpiece of Washington's policy of hostility and remains today the oldest and most comprehensive set of U.S. economic sanctions against any country in the world.

The embargo's original purpose was straightforward: to make the Cuban economy scream -- to use Cuba's economic dependence on the United States to plunge it into a crisis so severe that the Cuban people would rise up and overthrow Fidel Castro's revolutionary government. "If they are hungry, they will throw Castro out," President Dwight Eisenhower surmised when first contemplating economic sanctions.

The idea was not implausible. In 1933, Washington's refusal to recognize an earlier revolutionary government caused U.S. banks to refuse to loan money to Cuba's sugar barons, threatening the harvest. The threat was sufficient to cause the military -- led by Fulgencio Batista -- to mount a coup. By 1959, some 80 percent of Cuba's trade was with the United States and almost all of the island's capital stock -- and its spare parts -- were made in the USA.

But even in 1959 and 1960, as the first elements of the embargo were being crafted, voices in the U.S. government predicted that economic sanctions would be counter productive. "We cannot expect patriotic and self-respecting Cubans, no matter how distasteful Castro's policies may be to them, to side with the U.S.," warned Assistant Secretary of State R. Richard Rubottom, "if we go so far along the lines of reprisals that the quarrel no longer is between Castro and the real interests of the Cuban people but a quarrel between the U.S. and their country."

Those doubts would prove prescient, but they were overpowered by the visceral anger U.S. officials felt toward a Cuban population that supported Castro overwhelmingly. Economic sanctions became a form of collective punishment. "The only foreseeable means of alienating internal support is through disenchantment and disaffection based on economic dissatisfaction and hardship," wrote Deputy Assistant Secretary of State Lester D. Mallory in 1960. "It follows that every possible means should be undertaken promptly to weaken the economic life of Cuba . . . to bring about hunger, desperation, and overthrow of the government."

Thirty years later, when the collapse of the Soviet Union revived hopes in Washington that Castro's government could be overthrown, former Rep. Robert Torricelli sponsored the Cuban Democracy Act to tighten the embargo to "wreak havoc on that island." The new law cut off $700 million in U.S. sales of food and medicine to Cuba at a time when both were in desperately short supply. But regime change remained beyond the horizon of the possible, leaving punishment for punishment's sake as the only real rationale for the embargo.

Today, there are two fundamental arguments against continuing the embargo: one moral and one practical. Pope John Paul II invoked the moral argument during his 1998 trip to Cuba. "Embargoes," the Holy Father said, "are always deplorable because they hurt the most needy.'" No doubt Pope Francis will say something very similar when he visits Cuba in September.

Perhaps the cost to the moral standing of the United States could be justified if there was any chance that the embargo might actually bring about positive change in Cuba. But a half century of history argues to the contrary. Economic sanctions can be effective when they are multilateral, target a regime that is economically vulnerable, and have a modest, limited goal. The embargo meets none of these conditions. The United States is alone in adhering to it, the Cuban economy-despite its obvious shortcomings-is far less vulnerable today than it was in the 1990s, and the embargo's objective of fomenting regime change is hardly modest. If anything, by constraining Cuba's economic links with the United States, the embargo is slowing Cuba's transition to a freer, more open economy.

President Barack Obama's decision to normalize relations is premised on the idea that engagement is more likely to bring about positive change. To that end, he has licensed some exceptions to the embargo, but only Congress can lift it. As the presidential campaign begins, Republican congressional leaders are unlikely to do anything that makes Obama's Cuba policy look like a success.

Yet among the Republican rank and file in both the House and the Senate, there is a growing sense that the time has come to rethink this remnant of the Cold War. "I believe this is in the best interests of the Cuban people," said Rep. Tom Emmer (R-Minn.) as he introduced legislation to lift the embargo two weeks ago. "This isn't about the Cuban government -- it's about people on the street looking for more opportunity and to improve their quality of life."

President Obama is fond of saying that on Cuba policy, he is not interested in refighting battles that started "before I was born." It's time to lift the embargo and stop punishing the Cuban people for events that happened before most of them were born.