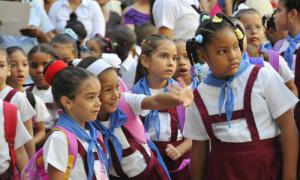 NEW YORK.— Cuba expressed its concern over the lack of integrated global efforts being made to achieve the 17 Sustainable Development Goals (SDG) included in the Post-2015 Agenda which will be presented to heads of state and government for their consideration at the end of this month.

Speaking before the World Conference of Speakers of Parliament, which took place at the UN headquarters, deputy Ana María Mari Ma­chado, vice president of Cuba’s National Assembly, noted that the lack of progress begin made at a global level jeopardises the goal of achieving a world where all inhabitants enjoy social protection, by 2030, and emphasised the need to work more effectively to avoid situations such as that of the eight Millennium Development Goals (MDG) agreed upon in 2000, which saw notable progress, but substantial differences between nations.

The National Assembly Vice President recalled that despite the U.S. blockade, Cuba has met all the MDGs, many prior to when they were agreed upon in 2000.

She also noted the evident lack of will on the part of the majority of developed countries to fulfill their Official Development Assistance commitments, while minimising the scope of the three pillars of sustainable development (economic, social and environmental) through intrusive policies of a clearly political character.

To conclude, the Cuban parliamentarian recalled the words of historic leader of the Cuban Revolution Fidel Castro Ruz, made in 1995 on the occasion of the UN’s 50th anniversary, when he warned that the world would face grave threats and sustainable development would be impossible without a rational approach to solving global problems.

During the conference, inaugurated on Monday, August 31 by UN Secretary General, Ban Ki-moon and President of the Inter-parliamentary Union, Saber Chowdhury, more than 170 parliamentary presidents and vice presidents highlighted the extraordinary effort which must be made in order build the kind of world we desire, overcoming the numerous challenges which threaten democracy, peace and development.