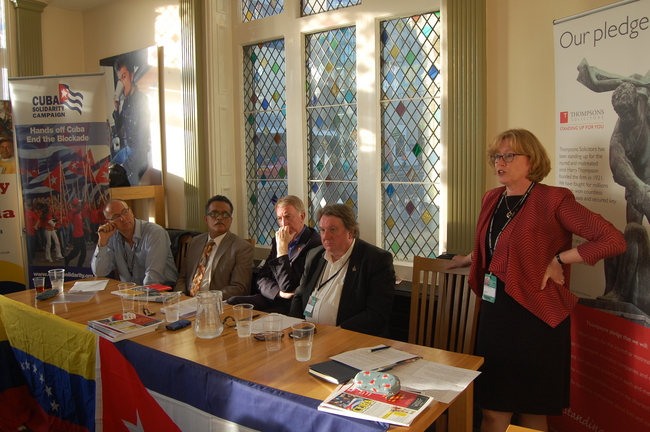 “Anther World is Possible” were the words of Labour’s new Shadow Chancellor John McDonnell MP and Jeremy Corbyn MP, the new leader of the Labour party spoke of the need to “always put people's interest before profit” in his leadership speech at the Labour Party conference in Brighton.

The theme of putting people first can seen across progressive governments in Cuba, Venezuela and others in Latin America and enthusiasm for such alternatives saw delegates having to be turned away from the standing-room-only fringe meeting at the conference in September.

Those who were lucky enough to get in heard from speakers including Baroness Angela Smith, CSC Director Rob Miller, Labour Friends of Venezuela’s Colin Burgon, Marcos Garcia from the Venezuelan Embassy and meeting chair, Unite Assistant General Secretary Tony Burke.

Baroness Angela Smith, Leader of the Opposition in the House of Lords, and Vice-Chair of CSC, told delegates how the blockade remains in place and continues to be the biggest issue affecting Cuba’s development.

“Obama has now said the blockade is wrong,” she said. “It’s failed Cuba, it’s failed the United States; it doesn’t satisfy anyone except Miami.”

Baroness Smith said how there is a moral argument to end the blockade, with damages to Cuba of $831 billion and “three out of four Cubans born under it”. Republicans in Congress who are reluctant to end the blockade “need to be challenged on why they are wrong”, she argued.

She criticised the British government for not putting pressure on the US to return confiscated money from British companies who have traded with Cuba.

The delegates were told about the $1.7 billion fine that German Bank Commerzbank received for doing business with Cuba and the $7.5 million Paypal received, both in March this year - after the improvement of relations, demonstrating the blockade is still in full force.

“The only thing that counts in politics is making a difference. If our voices, together, are heard across the world, we can end the blockade. In the same way that international solidarity with Cuba helped free the Miami Five, we’ve got to do the same to end the blockade,” Baroness Angela Smith said.

Chair Tony Burke, Unite Assistant General Secretary, spoke of the role of the trade union movement in the struggle to release the Miami Five, including the work of Unite and United Steelworkers Union in North America, who worked so tirelessly in the campaign, and how this solidarity can be helped to achieve victories in other campaigns.

Rob Miller, Director of Cuba Solidarity Campaign, stressed the huge gulf in the difference between the US and Cuba re-establishing diplomatic relations and normalising them.

He spoke of the US violating Cuba’s sovereignty and intervening in Cuba’s affairs; “The United States has a programme of trying to encourage Cuban internationalist health workers to defect who are working abroad in disaster relief areas – how can this be part of a normal relationship?”

The CSC Director recalled his meeting with Josefina Vidal, who has been leading the Cuban negotiations in the rapprochement, in Cuba “She was calm, strong and assured. Why shouldn’t she be? It was the US that came to the negotiating table, after all.

“The Cubans are conducting the negotiations in a meticulous manner, exploring every aspect, ensuring that any agreements are fair. After 55 years of resistance they are not about to role over and allow the US to take everything that it wants.

“They are not asking for anything more from the US than a fair deal based on mutual respect and understanding,” he said.

Rob Miller spoke of the US intentions in Cuba. “The change in relations does not mean the US has changed its aims. It is not to say that the US has changed its aims for Cuba, it would still prefer to see an end of Cuban Socialism, an end to that threat of a good example in the region” and he cited the example of $30 million being allocated for “pro democracy programmes - a misnomer for regime change activities” on the island.

Colin Burgon from Labour Friends of Venezuela and Marcos Garcia from the Venezuelan Embassy spoke about the distorted media coverage about Venezuela. “You don’t hear about Venezuela building hundreds of thousands of homes or accommodating 20,000 Syrian refugees,” Colin Burgon said.

Cuba Solidarity Campaign ran a stall in the exhibition area of the conference where many new members were recruited and delegates received further information on CSC and the latest news on the developments in Cuba. The Shadow Foreign Secretary, Hilary Benn MP, visited the stall and said how he was “very impressed with Cuba’s role in the Colombian peace process”.