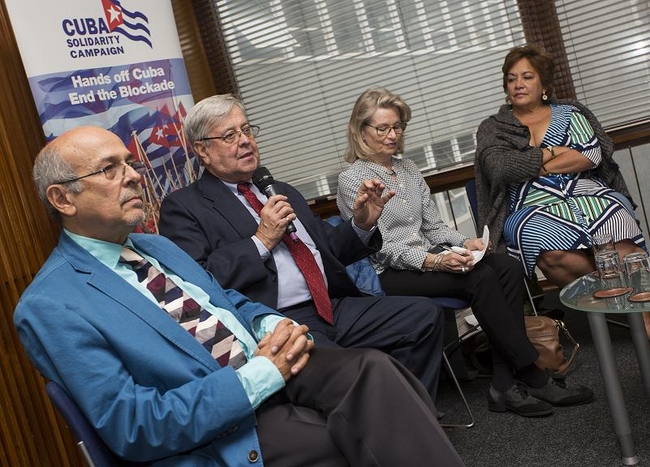 Solidarity activists, trade unions, academics, politicians and diplomats met in London at the weekend for a major conference on Cuba. The Cuban Futures conference was the first major British conference to discuss the future of Cuba-US relations since the announcements of 17 December that the countries would begin to normalise relations.

The conference was organised by the British Cuba Solidarity Campaign and the South East Region of the Trade Union Congress, and delegates travelled from across Britain to attend the event which sold out of tickets in advance.

Brian Wilson, explained how British companies were still unable to trade with Cuba because US blockade laws took priority of British trade laws, for which he believed the British government were complicit in not challenging on behalf of British companies: “Let nobody tell you that the blockade is over. Everywhere you turn there are obstructions for doing business with Cuba.

“It is still extremely difficult to do any business with Cuba. No British bank will go near Cuba as they are afraid of American sanctions”, he said.

He suggested that the US continuation of the blockade and its extraterritorial dimension may have strategic logic in protecting US business interests on the island, to allow them to “get there first”, should the blockade be eventually lifted.

For success in diplomacy, he argued, only one area should be discussed at one time. All five issues are important, he said, but the “main impediment of Cuba's development policy continues to be the blockade”.

Rafael Hernandez put into context the significance of the ongoing movement towards normalising relations: "We now have dialogue with the US - on equal relations - that is something that we've never had before".

Dr Alzugaray affirmed that socialism and the revolution in Cuba will continue. “We’ve been through the Special Period, which was very tough, so we’re not going to give it all up now we have relations with the US.

“What should Cuba do?” he questioned, “Nothing. It is the US that needs to unilaterally end the blockade, return Guantanamo… Cuba doesn’t need to do anything.”

Arleen Rodriguez warned that the “US tried to bring us to our knees with aggression, now they're trying the same with seduction.” Yet while “John Kerry said we're no longer enemies, they're still applying Trading with the Enemy Act on Cuba!” she said.

Canadian author and journalist, Keith Bolender, spoke about the historic threats of US government intervention in Cuba but stressed that the increase in US visitors to Cuba is not a threat. “US tourists going to Cuba will be changed by Cuba more than Cubans will be changed by them”, he said.

The Venezuelan, Bolivian and Nicaraguan Ambassadors to Britain all contributed to a seminar on ALBA and expressed their gratitude to Cuba for its internationalist role in the region.

In a session on Cuban health, Dr Imti Choonara, a leading paediatrician from Nottingham University Hospital, and Dr Emily Kirk, a researcher on Cuba’s medical internationalism gave presentations on what they thought the US and the world could learn from Cuba in these fields. Emily observed of the doctors involved in international missions; "Revolutionary Cubans see that the essence of being human is solidarity".

During the conference, a Round Table question and answer session was held, replicating the Cuban television discussion programme of the same name. Delegates were invited to ask the three Cuban speakers for their views on the new relations with the US, the future of Guantanamo, and how Cuba is perceived by young people internationally, among other topics. The Round Table was hosted by Victoria Brittain, a former Foreign Editor for the UK Guardian newspaper.

The presentations and discussions aimed to help British and European delegates develop a greater understanding of what is happening in Cuba today, and have the opportunity to hear form academic experts and Cubans themselves. Cuba Solidarity Campaign Director Rob Miller reminded friends of Cuba that the struggle to end the blockade continues and international solidarity is key in the process to end it.