Cycling the Revolutionary Roads of Cuba in a Noble Cause 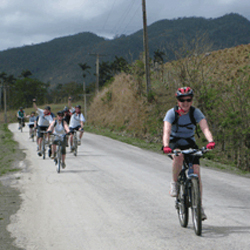 From November 7 to 17 a group of intrepid cyclists will be cycling the revolutionary roads of Cuba to raise money and musical equipment for the Abel Santamaria Special School for blind and visually impaired children.

Lying on the outskirts of Havana, the school provides specialised care for 145 children aged between four and 14 of whom 47 are blind children, eight deaf and blind and 90 have a visual impairment.

The school aims to integrate the children into mainstream schools as soon as the child is ready through an outreach programme which continues to support children at their secondary schools.

They are looked after by 64 teachers including speech therapists and psychologists and classroom assistants. Some of the teachers are also visually impaired.

The school works within the general curricula, only changing the techniques, procedures and teaching methods. As soon as children master orientation techniques they can be transferred to another school and many of the children then go on to university.

The school is a testament to Cuba’s fantastic education system which gives every child the best opportunities possible.

Music and dance play an important role in developing the children’s confidence and expression with the school often putting on concerts.

All of this happens despite the continuing illegal US blockade of Cuba which stops Braille machines, computers and musical equipment reaching the school.

The Braille machines they have are outdated and are being constantly repaired by cannibalising other machines.

Computers are old and it is often only the resourcefulness of the Cuban people that keeps them going.

Equally other items such as musical equipment and dancing shoes are becoming very worn and that is why the Cuba cycle challenge in November will be raising as much money as possible to help the school continue its defining work.

The school was named after Abel Santamaria Cuadrado, one of the martyrs of the Cuban revolution who helped lead the attack on Moncada Barracks, Santiago de Cuba, on July 26 1953. Captured during the attack, Abel was murdered in prison after being brutally tortured — he had his eyes gouged out by Batista’s henchmen.

After the revolution, all schools and hospitals for visually impaired children were named after Abel Santamaría in his honour.

For more than 50 years the Cuban state has successfully supported social inclusion of the disabled and insisted on the need for society to perceive in them an opportunity for the country’s development.

Jayne, Rob and I are amongst the riders honoured to be cycling through the magnificently welcoming Cuban countryside.

The route takes in 315km (195 miles) around the Escambray Mountains starting in Santi Spiritus and finishing in Santa Clara, where the legendary Che Guevara victoriously intercepted a government troop train in 1958 and heralded an end to the dictator Batista.

We shall also be visiting a Committee for the Defence of the Revolution (CDR), a polyclinic to learn more about Cuba’s world-class health system and spending a day with Cuban trade unionists before heading back to Havana to visit the Abel Santamaria School on the last day.

We would like to take as much equipment to the school as possible. Previous cycle challenges have provided specialist computers, Braille printers and specialist software purchased with funds raised by the annual Cycle Cuba Challenge.

Sponsorship has also been used to purchase each child a speaking watch and calculator and provide educational and musical equipment in the art and music rooms.

Help us to break the decade’s long illegal US economic blockade of Cuba and be involved in delivering essential educational equipment direct to young visually impaired Cuban schoolchildren.

You can sponsor Mike, Jayne and Rob here