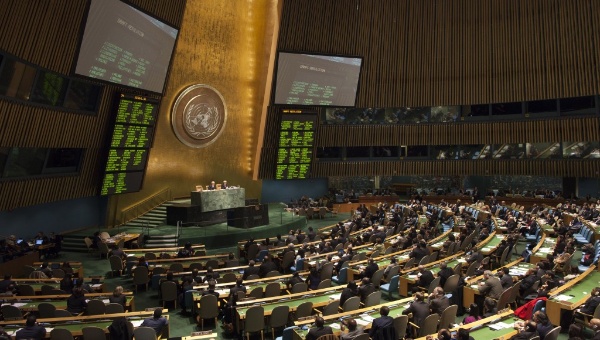 Once again, the United States and Israel voted against the motion to end economic sanctions.

The United Nations General Assembly voted in favor of lifting the blockade against Cuba Tuesday, with only the U.S. and Israel voting against.

The initiative has been backed by the majority of members for the last 23 years.

Secretary-General Ban Ki-moon presented a report that concludes that the economic sanctions, which have caused some US$833.8 billion in damage to the Caribbean island, should be lifted.

Moments before the vote took place, the U.S. representative to the U.N. declared that his country would vote against lifting the sanctions, saying that it was unfortunate that Cuba had presented a motion that was “almost identical” to the one the year before.

His speech followed that of Cuban Foreign Minister Bruno Rodriguez, who demanded that the U.S. end the “flagrant, massive and systematic violation of human rights of all Cubans” by terminating the half-century financial and economic blockade. Rodriguez pointed out the company Electra refused to supply Cuban hospitals with cancer drugs.

“The embargo is a flagrant, massive and systematic violation of human rights of all Cubans,” he said. “It is contrary to international law ... It has been descirbed as an act of genocide.”

“We hope that U.S. moves forward form a cruel and unjust policy anchored in the past and adopts a policy based on the feelings of its own citizens,” he added.

Iran's U.N. representative of the Non-Allied Movement spoke first in support of lifting the blockade. He listed the ways the sanctions had harmed the people of Cuba and the development of the country. “It affects all crucial sectors of society, such as public health … banking and tourism. It denies cuba aid,” he told the assembly.

“The embargo is also the main obstacle to broader access to the internet and the exchange of ideas.” “The continuation of the emabargo is unjustifiable, and counters Cuba’s effort to achieve sustaibable debvelopment,” he added.

Echoing the theme, Ecuador's NAM representative at the U.N. called on the United States to cease voting against the movement, “contrary to the will of the international community.”

U.N. Representatives from the Caribbean Community and Common Market, Caricom, and the South American regional bloc Mercosur both congratulated the United States and Cuba for reestablishing relations, but also called on the United States to lift the blockade against Cuba.

"The time has come to put an end to this unilateral embargo," said the Paraguayan representative, speaking on behalf of Mercosur.

188 of the 193 members have voted in favor of Cuba, with the United States and Israel being persistent exceptions. The decision must be unanimous in order for the measure to be passed.

The resolution is named the “Necessity of ending the economic, commercial and financial embargo imposed by the United States of America against Cuba.” It expresses concern over the interntional legality of the U.S. economic and financial siege of the Caribbean island.

U.S. President Barack Obama said in July that the blockade had failed. Since then, he has often hinted that it would soon be lifted. But despite beginning a path to normalize bilateral dealings, including lifting some travel and trade bans bans to the island, the sanctions continue, as a change of policy would have to be passed by Congress.

Cuban President Raul Castro has reiterated that in order for full relations to be reestablished, the United States must meet four conditions: to leave Guantanamo detention camp; end the blockade; end the “wet-foot-dry-foot” law encouraging Cubans to pursue residency in the U.S.; and end anti-government radio and television transmissions into the island.

Lifting of the half-century blockade would represent a historic moment for Cubans, 77 percent of whom were born under the harsh economic conditions.