'US Methods have changed but not the aims' 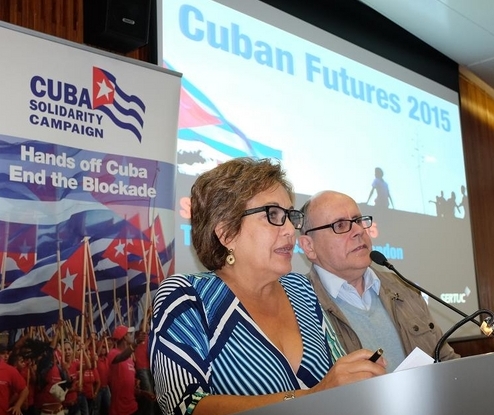 Cuban journalist ARLEEN RODRIGUEZ discusses how she sees Cuban international relations shaping up in the future. By James Tweedie

ARLEEN RODRIGUEZ is a prominent Cuban journalist and director of Mesa Redonda (Round Table), the most important discussion programme for analysis of national and international debates on Cuban TV, together with a weekly show on Telesur.

A former member of the Cuban National Assembly, she has interviewed presidents and some of the most recognised personalities in the political and intellectual realm, inside and outside her country.

Along with two other Cuban guests, she was in great demand, booked solid in plenaries and workshops throughout the day.

The mood was upbeat in light of the new atmosphere of detente between the US and Cuba, following the unexpected but very welcome release on December 17 last year of the last of Miami Five anti-terrorist heroes from jail in the US, where they had languished for 16 years.

First I ask her about the prospect of improved relations with the US since last December.

“I’m moderately optimistic,” she says. “It’s good to have relations with the US.”

But, she cautions: “They themselves have said that only the methods have changed, not the aims.”

As she points out, the criminal US blockade of Cuba is still in force, Washington has not relinquished its occupation of the Guantanamo Bay naval base, propaganda broadcasts by the shamelessly named TV and Radio Marti continue and, crucially, the US is still funding anti-Cuban groups in Florida.

“More than anything this is about funding actions against the Cuban government,” she says.

What about increased opportunities for trade, I ask.

“Yes, there are opportunities,” she grants, pointing to a 14 per cent rise in US citizens visiting Cuba since US President Barack Obama lifted his government’s travel ban on the country.

“There are more exchanges and less suspicion. There can be investment in Cuba, not just from the US, and that can improve things.

“In Cuba people are saying: ‘Well, we reopened the embassies but nothing else has changed.’

“What is needed is more concrete action like lifting the 50-year US economic blockade of the island.

“There is the paradox of a president who doesn’t have the power to change the situation,” she says, since it is up to the US Congress to lift the blockade and other anti-Cuban legislation.

“But he has a duty to influence people, to apply pressure to realise his policy.”

Have Washington’s attitudes and policies changed towards other nations of Latin America, its “backyard”?

“Yes,” says Arlene, “Obama is not the same as Bush.” But she cautions that the “imperialist philosophy” of interfering in the affairs of other states and maintaining bases across the region remains. “So I think it’s a difference of style.”

Cuba, by contrast, has excellent relations with many states in Washington’s cross-hairs, including China, Russia, Iran, Vietnam and South Africa, Rodriguez says.

“Cuba has always defended multipolarity and fought against unipolarity in the world.”

We turn to Jorge Risquet, who died last month at the age of 85. He was a hero of the Cuban revolution and its missions in the Republic of Congo and Angola, and was the Cuban representative at negotiations in 1988 that ended South Africa’s invasion of Angola, secured the independence of Namibia and contributed to the end of apartheid. Three of the Miami Five fought in Angola.

“Risquet is a source of pride to Cuba,” Rodriguez says. “Like Che, he opened up a front in the Congo and Guinea.”

I suggest that the volunteer doctors and nurses with Cuba’s internationalist medical brigades are the new Risquets. “Exactly,” she agrees. “But they came to Africa with the soldiers in 1973. There were always doctors.”

What role is the media playing, I ask, especially social media now that internet access is becoming cheaper and more widespread in Cuba?

“We’re very dissatisfied with traditional media,” Rodriguez says, complaining that it lacks criticism of the US actions in the region.

“But at the same time there has been a boom in electronic media, especially in fora where one can read the opinions of the people, criticism of civil servants and more. They are asking strong questions,” she adds.

There are two major social specialist networks in Cuba — Infomed for doctors and Cubarte for artists and intellectuals.

“Kids spend their money on the internet. They don’t drink beer so that they can go on the Facebook and Twitter.”

I mention that here in Britain we only hear about “dissident” Cuban bloggers.

“The anti-government things come from the US,” Rodriguez says. On Cuban social media “there is criticism, but it is not counter-revolutionary.”

Rodriguez points out the hypocrisy of the US accusing accusing Cuba of cracking down on free speech.

“WikiLeaks showed that the most monitored people in the world are in the West, and in the US more than anywhere. The US can’t accuse us of being a police state — what arrogance.”