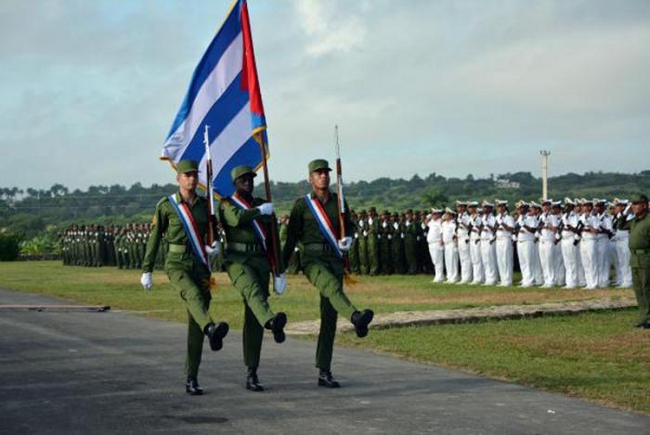 The ceremony to mark the 40th anniversary of Cuba's internationalist mission in Angola was presided over by the First Vice President ofthe Councils of Stateand Ministers, Miguel Díaz-Canel Bermúdez, Esteban Lazo ,president of the Cuban parliament and other members of the Party’s Politburo

As a symbol of Cuba’s internationalism, a cultural-political act and military parade to commemorate the solidarity and military support of the Revolutionary Armed Forces of Cuba to the People's Republic of Angola was held today, marking the 40th anniversary of the start of Operation Carlota.

At the former Triunvirato sugar plantation in Matanzas, now the RebelSlaveMuseum, the ceremony was presided over by theFirst Vice President ofthe Councils of Stateand Ministers, Díaz-Canel Bermúdez, EstebanLazo,president of the Cubanparliament,andother members of the Party’s Politburo.

At the start of the cultural-political act and military parade, a floral wreath was laid at the monument to the fallen, sent by Fidel and Raúl.

The Cuban military mission in Angola was named Operation Carlota in honor of the legendary rebel slave of the Triunvirato sugar plantation, Carlota, who led one of the largest slave rebellions in Cuba, which took place on November 5, 1843.

Meanwhile, the diplomatic corps of the African nation recalled the feats of the Cuban and Angolan forces and reaffirmed the eternal gratitude of the Angolan people to the Cuban heroes who gave their lives during the mission. In the words of Raúl Castro, “The supreme glory and merit belong to the Cuban people, the real protagonists of this epic feat.”