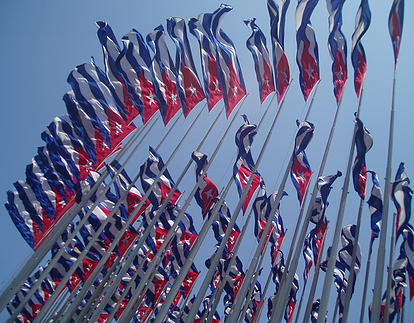 CEMENTING the links between Glasgow and Havana — they’ve been twinned since 2002 — the programme depicted attitudes to life and a love of cinema shared by both cities.

Eirene Houston, the Glasgow-based writer and director who masterminded the initiative, and the visiting Cuban filmmakers pointed to the mass audiences for films in the Cuban capital, paralleling the Glaswegian experience.

The festival concentrated on films from Cuba, including at least three British premieres, and the range of different genres showed off the breadth of filmmaking on the island.

Conducta (Behaviour), made last year, was a triumphant debut. The film pulls no punches in its examination of the underbelly of the Cuban revolution, with the crumbling buildings of Havana to the metaphorical fore.

But the film is nevertheless upbeat. It centres around the troubled Chala — superbly played by young Armando Valdes Freire, (pictured, centre) — and the impact on him of his mother’s drug abuse, his family’s illegal dog-fighting ring and his own run-ins with the police.

His only positive is his deep relationship with his form teacher Carmela (Alina Rodriguez) but this is threatened by her championship of the troublesome kid and his young “girlfriend” Yeni, given another great performance by Amaly Junco.

But hope wins through — Chala’s real interest is flying pigeons, Yeni and Carmela break the link with the dog fights and the latter resists the pressure for her to retire.

Is the film a clash between the older revolution and the new commercialism? If so, young teacher Marta’s move from replacement to support for Carmela is hopeful, as is Ignacio’s tacit acceptance of responsibility.

The beauty of the filming indicates a deep love for the people and city too, on both sides of the ubiquitous railroad tracks.

Me Dicen Cuba (I Say Cuba), also made last year, is a documentary of mostly closely edited series of interviews with the cream of Cuba’s musicians. Shot during their coming together to record an album in support of the Miami Five, they reflect on the universal values of homeland, family, music, love, friendship, heroism and peace.

It’s cleverly edited and the range of performers and music from church choir, to orchestra, to salsa and rumba beats, indicates both the importance of music on the island and its role in the country’s campaigns.

But for a film about music there is too little actually on offer, with not even a complete performance of Alexander Abreu’s title track.

That disappointment was somewhat offset by the screening a couple of music videos featuring top Cuban band Los Van Van.

Its director Alejandro Valera — who’s just moved to Glasgow — pointed out how, in an economy short resources, the video format was often a route into filmmaking.

Another 2014 film, Boccaccerias Habaneras, was edited by Valera. Bawdy and earthy and is a “translation” of some of the stories from Boccaccio’s Decameron to Havana. It’s a transition that works well, mainly because the humour is based in the stories, not in the language.

And the film doesn’t take itself too seriously, even taking the mickey out of itself by a self-referential nod back to Boccaccio.

The festival’s made an excellent start in bringing some great Cuban cinema to Glasgow and here’s hoping this is just the start.