Reaching the community, the only way to combat AIDS 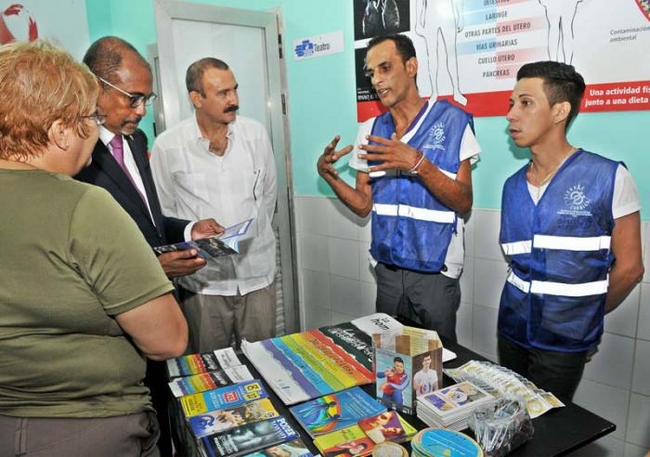 “The AIDS debate must change and go beyond the sphere of medical care to restore the dignity of those affected.” This, according to Michel Sidibé, executive director of the Joint United Nations Program on HIV/AIDS (UNAIDS) and undersecretary general of the United Nations, on an official visit to Cuba accompanied by a large delegation since November 11.

With the aim of learning about the island’s experience in STI/HIV/AIDS and advances made in Cuban biotechnology, in particular its diagnostic measures, Si­dibé toured various health facilities in the capital such as a Vedado polyclinic; the National Center for Sex Education (Cenesex) and the Pedro Kourí Tropical Medicine Institute (IPK).

The UN representative was given details about the structure of the Cuban healthcare system, as well as about the National Program for the Control and Prevention of STI/HIV/AIDS, and the island’s action plan to combat the epidemic.

”I had been wanting to come, and have the chance to learn about, Cuba for a long time, because this country is decades ahead in the concept of public health. From early on Cuba has been working effectively in the good use of resources and to achieve social justice. Recently in 2015, the world began to talk about universal access to health services. You understood this aim 50 years ago, you embraced it, provided access, integration and regionalization of healthcare, principles without which it would have been impossible to cross frontiers,” he stated.

”From very early on Cuba was a model for me, because we were treated by the island’s doctors in my country, Mali. Today, Cuba exports its human resources, but if it were also to export its vision of public health, based on social justice, inclusivity, and the principle that every person is also responsible for their health, it would help Africa and the world to be different,” he said.

According to Sidibé, the vision of universal healthcare and reaching people is the only solution to tacking AIDS.
He congratulated the Cuban people and its health and governmental authorities, and expressed his joy and pride at being in Cuba, only months after the country announced to the world that it had successfully eliminated mother-to-child transmission of HIV and syphilis.

During his meeting with Dr. Mariela Castro, Cenesex director, the expert praised the institution’s work. “What they are doing is giving a voice to those who are not always able to speak. The fight against AIDS has taught us two lessons; the importance of combating social injustice and creating alliances among all strata of society.”

The representative also highlighted the work of the IPK, national HIV-AIDS treatment reference center, for its commitment to health and society.

He emphasized that it is astonishing how Cuba, which since 1986 has had a HIV/AIDS Control and Prevention program, began implementing accelerated actions to combat the virus, even before the UN launched its 2020 Fast-Track Targets.

Speaking with Granma, Sidibé commented: “What we have learned about HIV/AIDS is that when efforts are directed solely at treating the symptoms of an illness, we will always fail. We succeed when the person becomes the focal point, which is achieved when we start to talk about mobilization, social justice; when we work for greater equality, and to combat fundamental problems such as stigma, discrimination; and when you ensure that people have their rights and are genuinely included in public policies. This is only possible if people have the right to education relating to AIDS prevention and awareness promotion as a central pillar of the health system.

”We will not win the battle against non-transmittable diseases if we only wish to buy pills for people; there will never be enough money to cover the cost of this. But we will succeed if we change social factors, life styles, eradicate discrimination and focus on gender identity and equality.”

Michel Sidibé also held a fraternal encounter with Cuban Minister of Health Dr. Roberto Morales Ojeda, during which the two officials discussed the island’s prospects and challenges looking toward the 2020 Fast-Track Targets and national response to the epidemic.

The UN representative also met with President of the Provincial Assembly of People’s Power of Havana, Marta Hernández, during which he signed the Paris Declaration, a document which outlines the important role cities will play in combating the AIDS epidemic by 2030. The signing of this document has become a customary practice for the UN official when visiting cities, in order to highlight the relationship between urban areas and the spread of HIV and thus the necessary work which must be carried out in this context.