"Another world is not only possible - it is essential": Latin America 2015 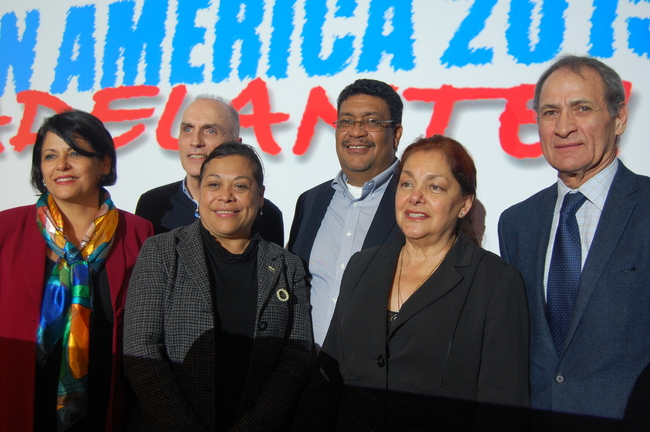 Over 500 people attended the 2015 Latin America Conference – now in its 11th year - at a packed TUC’s Congress House in London, where delegates could hear from ambassadors, academics, MPs, trade unionists, activists, campaigners, journalists and artists at the largest event of the year for Latin America solidarity in Britain.

With over 75 speakers, 24 seminars, three plenary sessions, several film showings, and many solidarity stalls, participants were once again spoilt for choice at the sold-out event.

Shadow Department of International Development Minister, Diane Abbott MP spoke in the opening plenary about how progressive governments across the region are meeting their UN Millennium Development Goals (MDGs; Cuba is the first country in Latin America to meet all the MDGs) by putting people before profit and investing in health and education. Abbot spoke about global inequality is “out of control” and how we in Britain can “learn from the governments of Latin America, who are liberating hundreds of thousands of people out of poverty”.

“Jeremy Corbyn and I have always stood in solidarity with Latin America and we will continue to do so”, she said.

A seminar on workers and trade unions in Cuba entitled “Cuba: What about the workers?” featured a range of excellent speakers on the subject.

OH Parsons Lawyer Steve Cottingham contrasted the labour rights in Cuba and Britain; “In Cuba there is the right to work, the right to paid study leave for training, 30 days annual leave plus 10 public holidays and no such thing as zero hour contracts”, he said. “However, the blockade prevents the Cubans from access to basic health and safety equipment such as hard hats”, demonstrating huge impact the blockade has on life and work in Cuba.

Dr Steve Ludlam, from the University of Sheffield, gave an insight into Cuba’s participatory democracy and how the trade unions are “integral to the whole process”. He said how the CTC General Secretary has a seat on the equivalent of the Cabinet to ensure the unions are represented in all decisions. “The CTC co-ordinate the whole mass public consultations for legislation, including pensions, retirement age, contracts” he said.

The post-December 17 situation has created new threats of US intervention in Cuba, with Obama wanting to form breakaway unions, a clear undermining of the revolution and of Cuban sovereignty, he said, urging that solidarity is needed with the unions in light of this threat.

Linda Perks, UNISON Greater London Regional Secretary, gave an insight into the solidarity UNISON has given to Cuba over the years, ranging from medical material aid during the Special Period to the present day which includes sending delegates to May Day and sharing paramedics’ expertise between London and Havana.

She praised the Cuban’s “top health service - which is better than ours, now” and stressed the essential role that Cuba plays in supporting progressive governments across Latin America and the global south and how we can learn so much from Cuba, from their health service and from their experience in building mass organisations.

In the seminar of “What can the US learn from Cuba?” actor Andy de la Tour said, “The short answer is, everything!” We, too, can learn so much from Cuba, particularly the cultural space the Revolution has created, he said, which, as an actor, “makes me green with envy”.

Child health specialist Dr Imti Choonara spoke about Cuba’s inspirational child health system, where “prevention in key and the human resources are phenomenal”. Cuba’s low infant mortality is not just about healthcare as an isolated sector; it’s about how society is organised, about how pregnant women are looked after and about progressive women’s rights more generally. “If the US followed Cuba’s lead, literally thousands of lives in the US would be saved every year.”

Dr Rebecca Gordon-Nesbitt spoke about how Cuba uniquely “embraces culture as a form of production in the same way as material production. The end goal is happiness – which stimulates economic development”. The Cuban experience of “culture being for everyone, not just an elite minority” is an example of “culture working best when it is detached from the market economy”, she said. Ending the illegal blockade would benefit culture in Cuba, she suggested, as the blockade is cultural as well as economical.

Guillermo Patera Lambert from the Cuban Embassy said how “We are not perfect in Cuba but we achieved a lot in culture, despite the blockade. Carlos Acosta learned ballet in Cuba; he is a product of the Revolution.” All the achievements of the revolution, including culture, are under threat from US interference, he said. “Remember the goal of the US is to destroy the achievements of the revolution.”

In another packed plenary, Alicia Castro, the Argentinean Ambassador to Britain, spoke about how “Fidel and Raul Castro have been central to the progressive wave across Latin America”. She said “In a world of chaos Latin America is now a region of peace. We stand against foreign and political interventions – and just as Jeremy Corbyn and the Pope have recently said –wars simply bring a cycle of further wars”.

Speaking just days after the left government of Cristina Fernández de Kirchner narrowly lost the Presidential elections in Argentina; the outgoing ambassador said “This is by no means a farewell. The struggle continues and international solidarity must continue and will always be needed”.

The seminar on US-Cuba relations and how to end the US blockade was hugely popular with standing room only. Teresita Vicente, Cuban Ambassador, summed up the post-December 17 situation. “We are in exciting but also difficult times right now. The US is now exercising soft-power; the objectives remain the same but with different tactics. International solidarity is now crucial”.

George Galloway heaped praise on the work of the Cuba Solidarity Campaign, urging people to join the CSC, “the best campaign in Britain by some way”, he said.

On the new US-Cuba relations, Galloway said: “What a fantastic achievement that the US had to come to Cuba. They tried occupation. They tired invasion. They tried attacks, sabotage, killing people, terrorist attacks; all organised by Washington, the capital of the Land of the Free and centre of the so called war-on-terror - but they got a bloody good hiding.”

“According to the normal rules of aerodynamics, a bumble bee would not be able to fly. According to the normal rules, Cuba should have collapsed. But rather than collapsing, it is probably the best loved country on earth - think about that. Cuba sends doctors all round the world; peaceful internationalism; restoring sight, treating ebola in Africa and treating people in the mountains of Kashmir following their earthquake – all of this in the face of terrorism and subversion from the United States”.

Bernard Regan, CSC Secretary, rounded up the seminar with a call for continued solidarity in the face of continued US interference. “Only the people of Cuba should have the right to determine their political, social and economic path”, he said. “In a sense, defending Cuba is defending our own interests, where we strive for a better world; a world where we value health and education and so on.”

In the final plenary, Diana Holland, Assistant General Secretary of Unite and CSC Chair, spoke of the importance to “maintain vigilance as well as solidarity – we must never forget the coup in Chile” in light of continued interference and destabilisation tactics from the US.

Jeremy Corbyn MP, the Leader of the Labour Party, has spoken at the previous ten Latin America conferences but could not attend this year’s event due to “putting all his efforts into trying to stop war” Diana Holland said, as David Cameron’s call to bomb Syria is being discussed by MPs in Britain.

Chris Williamson, the former MP, spoke in place of Jeremy Corbyn, who said we should “dare to dream of a better world” and spoke of how “Cuba offers inspiration”. He called for the return of Guantanamo to Cuba and to end the blockade once and for all.

Christine Blower, General Secretary of the National Union of Teachers, spoke of her delight at the freedom of the Miami Five since last year’s conference “but so much more needs to be done”, she said, “we must continue to fight to end the blockade”. Christine spoke of the NUT’s practical international solidarity with Cuba, where they helped the teaching of English to Cuban medics, many of whom went on to fight the ebola outbreak in West Africa, showing the tangible benefits of internationalism and solidarity.

Teresita Vicente told delegates “77 percent of Cubans have been suffering from the impact of the blockade since the day they were born, which has now cost the Cuban economy over $830 billion. Lifting the blockade would be the essential element of the new relationship and put us on the path to normalisation.”

The Cuban Ambassador urged that the US cannot interfere with Cuba’s internal politics; “We will never renounce our socialism or our independence” she said.

Click here for the Storify live-feed from the Conference

Click here for a report from the Argentina Embassy