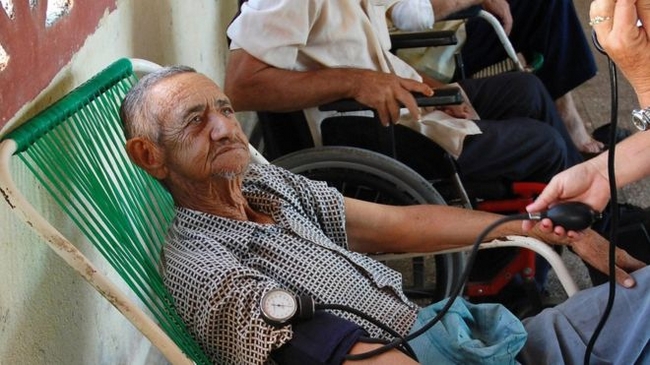 Imagine your doctor knocking at your door to give not just you, but your whole family, an annual health check-up.

As well as taking blood pressure, checking hearts and asking all sorts of questions about your job and your lifestyle, this doctor is also taking careful note of the state of your home, assessing anything which could be affecting the health of you and your family.

This is what happens in Cuba and although it might not go down well everywhere, it's a pro-active approach to healthcare that yields some impressive results.

Leader of the pack

In terms of having healthy people, the Cuban health service outperforms other low and medium income countries and in some cases, outperforms much richer ones too.

Despite spending a fraction of what the United States spends on healthcare (the World Bank reports Cuba spends $431 per head per year compared with $8,553 in the US) Cuba has a lower infant mortality rate than the US and a similar life expectancy.

So how do they do it, and could other countries, rich and poor, learn from the Cuban example?
World Health Organization director-general Margaret Chan certainly thinks so.

She has praised the preventative nature of the Cuban health system and called on other countries to follow the Cuban example.

Healthcare in Cuba is free and universal, enshrined in the Cuban constitution as a fundamental human right, guaranteed by the state.

And the foundation of their preventative health care model is at primary care level, the family doctors who oversee the health of those who live around the clinic. And Cuba does have lots of doctors.

And many of these doctors are based in neighbourhood medical centres and, along with a nurse and support from visiting specialists, they monitor closely the health and wellbeing of every single Cuban.

Tanya Rosa de la Cuevas Hill is a specialist in comprehensive medicine and she runs a neighbourhood clinic in Old Havana. Along with her nurse, she looks after 334 families who live in the surrounding streets.

"Being a family doctor, I love it," she says. "The first mission we have is to prevent illness. That's the wonderful thing about my job. Prevention of diseases, prevention of accidents, that's what I like best".

Key to the prevention model is the annual health assessment, a full health check-up which every single one of their 1,287 patients will undergo, often at their homes.

And there's no getting out of it either.

"My nurse knows where they live," Dr Quevas Hill jokes. "They can run, but they can't hide!"
The data from this check-up allows the family doctor to put her patients into categories according their "risk". If they're healthy, the annual check-up is enough. But if they're showing signs of ill-health, if they drink too much, smoke or have a continuing health condition, they're seen much more regularly.

It's an integrated, whole-person approach to healthcare, perhaps too intrusive for some, but widely accepted within Cuba.

The aim is to stop people getting ill in the first place.

According to Gail Read, executive editor of the international health journal, MEDICC Review, Cuba had to focus on prevention precisely because it is a poor country.

"It's much more cost-effective to treat hypertension by exercise than to do a coronary by-pass", she says. "It makes sense to go upstream, to catch the problem before it begins or very soon afterwards."

So in this highly centralised country, data is gathered at the local level, fed up to the second tier of healthcare, the neighbourhood policlinic.

Here, health trends are spotted and decisions taken about how best to intervene.

The model has worked well and produces impressive results. But the health successes that Cuba has achieved have, paradoxically, brought a new set of health challenges, and the preventative approach is being tweaked to tackle them.

Cubans no longer die of infectious diseases because of a hugely successful vaccination programme, so people live longer. And an ageing population presents what one minister described as a "colossal challenge for the nation".

Ageing, an increase in obesity and problems with tobacco and alcohol mean Cuba's citizens are now dying of the same diseases claiming lives in higher income countries: heart disease, stroke and cancer.

It's been said that "Cubans live like the poor, and die like the rich", a reference to the fact that Cuba is a relatively poor nation, yet its disease profile matches that of richer countries.

The response from the Cuban government to these new health challenges is a huge investment in public health education around smoking, alcohol, diet and exercise.

Those delivering the message, overseeing, encouraging, inspiring healthy living, will be the local family doctor and nurse. And they'll be delivering it, in person, straight to the door.