Strengthening Relations Between France and Cuba 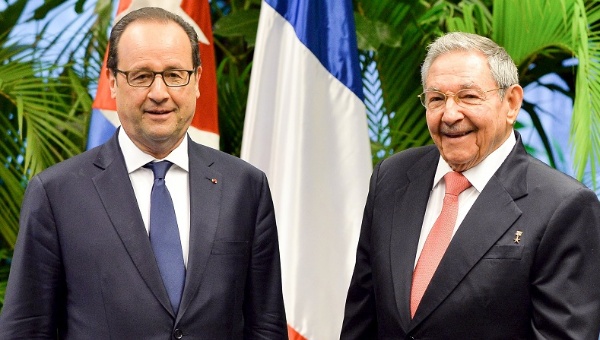 On 1st February 2016, Raúl Castro will visit his French counterpart Francois Hollande. This is the second time that Cuban President makes an official visit to France, after the famous travel Fidel Castro in 1995, then received by François Mitterrand. This two day visit will help to strengthen cooperation between the two countries.

According to the Elysee Palace, this is a "new step" which will cement the Franco-Cuban relationship. For his part, the Cuban Foreign Ministry confirmed "the excellent state of bilateral relations and political dialogue”.

"France is an important partner for Cuba, with which we maintain significant ties of cooperation and mutual understanding," said the spokesman of the Cuban diplomacy Rogelio Sierra.

In May 2015, François Hollande had made a historic visit to Cuba, becoming the first French president and Europe's second president (after Cyprus) to visit the island. France is aware of the political importance of Cuba enjoys great prestige in Latin America and is a member of two regional integration organisations such as CELAC (the Community of Latin American and Caribbean States, 33 countries) and ALBA (the Bolivarian Alliance for the Peoples of Our America, 13 countries). In Havana, Francois Hollande stressed the importance of his journey: "Come to Cuba is to come to a country which accounted for Latin America a form of expression, claim the dignity and the independence. This explains that the country plays an important role in numerous mediations”.

Since coming to power in 2012, Francois Hollande has made Latin America and Cuba a priority. In January 2015, he appointed Jean-Pierre Bel, former Senate President and specialist in Latin America, Special Adviser of the Presidency of the Republic for Latin America. Jean-Pierre Bel has been instrumental in strengthening ties with the largest island of the Caribbean, aware that it is the gateway to the Latin American continent, in a context of rapprochement between Washington and Havana.

Paris has shown the way forward for the European Union, which still imposes a Common Position - an obstacle to the normalisation of relations between Brussels and Havana, calling to adopt a new constructive approach based on mutual interests and abandon a policy imposed by Washington.

The US has lost influence in the region, France has a major role to play in strengthening cooperation with the 33 countries of Latin America and the Caribbean. The continent is home to a population of over 600 million people and represents a favourable investment field to French companies.

In December 2015, the Paris Club, who chairs the group of official creditors, concluded an historic agreement with Cuba on its external debt, which was not honoured since the 1980s. Nearly $4 billion of debt in respect of late interest was cancelled and $ 2.6 billion of debt was rescheduled over a period of 18 years. Again, Hollande was personally involved to get the signature of the agreement, providing "a final and lasting resolution framework ", which normalises the economic and financial relations with western countries and stimulate foreign investment Cuba.

Currently, about 60 French companies are located in Cuba, including Pernod Ricard, which has won a historic battle against the multinational Barcadi rum since 1994 usurped the Havana Club trademark in the US market. Indeed, the Office of Patent and Trademark United States decided that Cuba was the legitimate owner of the most famous brand of rum in the world. The island delegates the international marketing of this product to the French spirits company. And Pernod Ricard, which obtained the registration of the mark, may sell Havana Club rum on the US market as soon as the economic sanctions will be lifted.

Furthermore, in October 2015, the French and Cuban Ministries of Education have signed an action plan to facilitate cooperation and exchanges between higher education institutions of both countries. Najat Vallaud-Belkacem, Minister of National Education, Higher Education and Research, received his Cuban counterpart Rodolfo Alarcón Ortiz in Paris to formalise the agreement, reflecting the excellent state of bilateral relations. This agreement adds to the inauguration of the new headquarters of the French Alliance in Havana in May 2015 which strengthens the presence of the language, culture and values of French in Cuba. The Alliance of the capital, home to nearly 10,000 students, is one of the largest in the world.

Strengthening ties between France and Cuba marks the beginning of a new era. Paris has shown that it is possible to maintain cordial and fruitful relations with Havana, based on the sovereign equality, reciprocity and non-interference in internal affairs.

Salim Lamrani is Doctor of Iberian and Latin American Studies from the Université Paris IV-Sorbonne, a lecturer at the University of La Réunion, and a journalist specialising in relations between Cuba and the United States.