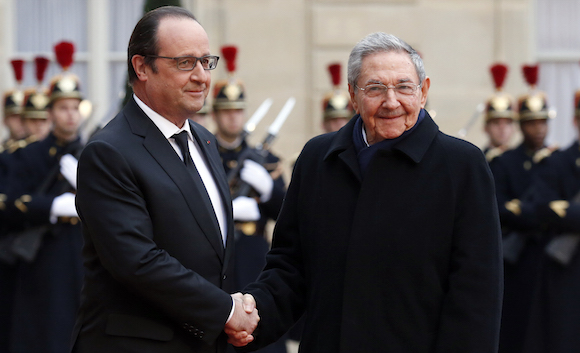 A battery of journalists followed him along the red carpet to the palace entry, where Hollande again embraced him and extended his hand, nine months after their meeting in Havana.

Following established protocol, the two posed for a few seconds for the benefit of photographers, and greeted the respective delegations, before entering the Ambassadors’ Room for official talks.

Once the private dialogue was concluded, the two Presidents witnessed the signing of several agreements regarding Cuba’s debt; the economic-commercial agenda; negotiations for the establishment of the French Development Agency on the island; bilateral cooperation; and the promotion of trade between the two countries.

Activities within Élysée Palace, a majestic building located in the heart of Paris, continued with the two Presidents making statements to the press, sharing details of the state visit, the official talks, and prospects for an even stronger bilateral relationship.

François Hollande said it was a pleasure to receive Raúl in Paris, on the first state visit by a Cuban President to this European nation, and thus returning the hospitality he enjoyed during his stay in Havana.

Among his first comments was a condemnation of the U.S. blockade, saying that it should be definitely ended, to allow Cuba to take its rightful place in the world.

Hollande emphasised that France wants to accompany Cuba along the road of more interaction with the world which the country has chosen, mentioning specifically the accord reached to alleviate Cuba’s debts with the Paris Club.

He recalled his visit to the Alliance Française in Havana, last May and highlighted cultural ties between the countries, along with cooperation in the area of medical research, also praising Cuba’s role in facilitating peace talks to end the Colombian conflict and the recent climate change conference in Paris.

After listening to his host, Army General Raúl Castro recalled the historic links between the two countries and thanked French authorities for the warm welcome he and his delegation had received, noting that the official talks held were conducted in an atmosphere of cordiality and mutual respect.

Raúl reiterated Cuba’s willingness to broaden bilateral relations in all areas, highlighting the signing of a bilateral agreement on Cuba’s debt and thanking the French government for its significant role in the historic Paris Club agreement.

He likewise welcomed the desire expressed by French authorities to accompany Cuba and actively support its development, saying, “France has been, is, and will be an important associate for Cuba.”

As night fell in this city, which has seen to every detail to ensure a successful visit, the French President hosted a gala dinner for his Cuba counterpart, where the two leaders again described the visit as historic, noting its significance to a improved relations between the countries.

Thus concluded the first day of Raúl’s state visit which began at the Arc de Triomphe, and will continue Tuesday with a full agenda.