Based on an article from TeleSUR | Thursday, 18 February 2016 | Click here for original article 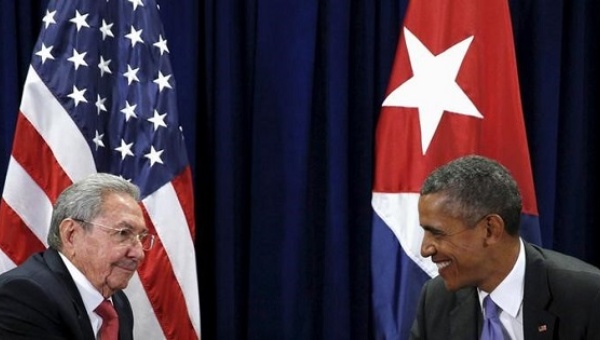 The restoration of diplomatic relations between Cuba and the United States is widely seen as one of Obama's most important legacies as U.S. president – but the blockade remains in place

U.S. President Barack Obama will visit Cuba on March 21-22, marking the first trip by a sitting president since 1928.

It is being viewed as a means to cement what Obama sees as one of his more important legacies as president: the restoration of diplomatic relations with Cuba. The Cuba visit is expected to coincide with a signing of peace deal between the Colombian government and the FARC. Peace talks have been taking place in Havana over the last few years and are expected to finalise in a peace agreement shortly.

There are still many obstacles before the US and Cuba's relations can be said to be normalised; the continuing illegal US blockade is still in place, Guantanamo Bay still occupied by the United States and US intervention in Cuba continues.

Obama has called on Congress to lift the blockade – as did Secretary of State John Kerry during his visit to Cuba in the summer of 2015 – but the Republican-controlled Congress has refused to end it.

Although Congress is needed to formally end the blockade, it has been argued that the U.S. President can do more to modify blockade using his broad executive powers; the same powers used by John F. Kennedy to establish the blockade can be used today to dismantle it.

Obama’s trip to Cuba is predicted to have an effect on the ongoing primary race in the US.

Two of the Republican contenders, Marco Rubio and Ted Cruz, are of Cuban descent and have vocally opposed the Obama administration's efforts at relaxing the illegal, decades-old blockade on Cuba.

Both were quick to condemn Obama's visit.

White House officials are expected to make the announcement Thursday, the visit to Cuba will form part of a broader trip to Latin America, expected to take place in late March.

Obama is also expected to visit Argentina, where new right-wing President Mauricio Macri has been eager increase ties with the United States after years of fraught relations between the two countries.

Obama told Yahoo News in December that he hoped to visit Cuba in 2016 but only if enough progress had been made in bilateral relations and he was able to meet with opponents of the Cuban government.

Cuban officials said they would welcome a visit by the U.S. president but reiterated their longstanding position that Obama should not attempt to interfere in Cuba's internal affairs.