Malmierca: Obama has support to continue dismantling the blockade 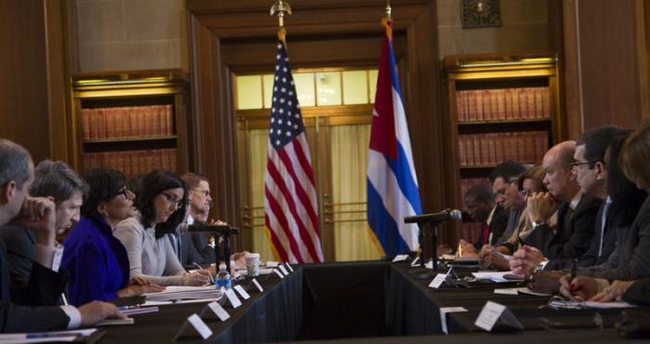 Malmierca and Pritzker inaugurated the second meeting between officials from the two countries on the implementation and scope of existing regulations, which will conclude this afternoon, at the headquarters of the Commerce Department, just a few meteres fromthe White House.

Experts from both countries will seek ways to overcome the limitations that remain and achieve concrete agreements that would make the process started on December 17, 2014, irreversible.

“We are not naive,” the Cuban minister said, “we know that all this (the dismantling of the blockade) poses political problems for the administration, especially in an election year. But there is strong support not only in U.S. society but in Congress, from members of Congress from both parties, to continue moving forward.”

Since Bill Clinton signed the Helms-Burton Act in 1996, the President of the United States has lost the authority to completely end the blockade against Cuba, but there remains room for maneuver.

The President can issue executive licenses that transform the implementation of the blockade, as Obama has done on three occasions in January and September 2015 and in January this year.

If we analyse the measures taken thus far, Malmierca added, we can conclude that they are positive and go in the right direction, but we must also recognise that they are not enough. The most essential elements of the blockade are still in force.

To mention just one example, he noted that since December 2014, six fines have been applied to financial institutions for trading with Cuba, worth close to two billion dollars.

The persecution of Cuban transactions and the banning of the use of the dollar by the island have a deterrent effect on banks and companies around the world that profoundly affects the Cuban economy, he added.

Meanwhile, Pritzker noted that taken together, the regulatory changes implemented by the Obama administration have allowed for trade and economic engagement across a wide range of areas, including environmental protection and energy efficiency; telecommunications; agricultural production; disaster prevention; education; and supplies and equipment to the Cuban private sector.

In recent months, department specialists have met with business leaders across the country, she said, adding that it is clear that they want to do business with Cuba. She commented that Cuba could help with some of the challenges in this respect, claiming that the requirement for Cubans to be contracted through state bodies and difficulties in identifying relevant Cuban laws and regulations were a hindrance.

Cuba does not apply any coercive measures against U.S. companies or business people. In fact, as Minister Malmierca told the dozens of business people gathered at the Chamber of Commerce on Tuesday, February 16, they are welcome to do business on the island.

Pritzker demonstrated particular interest in the changes that will be considered at the next Congress of the Communist Party of Cuba.

Malmierca responded that the Congress will seek, among other things, to define the priority sectors of the economy for the country's long-term development.

“The most complex issue is that we want all these changes to be implemented without affecting the population, we do not want to apply shock measures or measures that may have a negative effect.”

Among the areas to be clearly defined, he said, are the role of the market in the Cuban economy and the role of foreign investment in the economic development of the country.

“That is to say we will seek to further consolidate what has already been decided, which is an irreversible path.”

“All the measures we are adopting, and which were sovereignly chosen long before December 17, 2014, I'm sure, in some way, will also contribute to making the decisions we are making together more feasible,” he concluded.