Cuba to Raise US Occupation of Guantanamo During Obama Visit 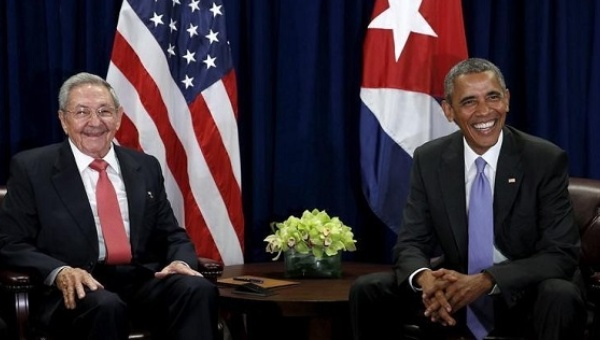 The 50-year U.S. blockade on Cuba, the return of Guantanamo Bay, and human rights will all be considered when the two presidents meet.

A senior Cuban official confirmed this week that topics such as the blockade on Cuba, the status of U.S.-occupied Guantanamo Bay, and human rights issues will be up for discussion when U.S. President Barack Obama visits the island nation in March.

Obama has said he intends to bring up the topic of human rights when he meets with Cuban President Raul Castro on March 21 and 22.

The U.S. president's visit is being billed as an opportunity to strengthen bilateral relations between Cuba and the United States. Its the first visit by a U.S. head of state since 1928.

Vidal said that ending the ongoing U.S. blockade on Cuba and the return of Guantanamo Bay to Cuba would be a chief topic of conversation.

Cuba has maintained that the full restoration of diplomatic relations between the two countries depends on the satisfactory resolution of issues like the blockade and Guantanamo.

“Therefore, for us, discussing matters such as this and others, form part of this effort we are making to build a new relationship with the United States,” said Vidal.

After five decades of tension between the two countries, with diplomatic relations normalised only in the last year, anticipation for Obama's visit to the island is growing.

“The U.S. president will be welcomed by the government of Cuba and its people, with the hospitality that characterises us,” said Vidal. “We believe it will be an important opportunity for him to have direct contact with the Cuban reality and everything we have been doing in recent years in our country as a result of the sovereign decisions of the government of Cuba.”