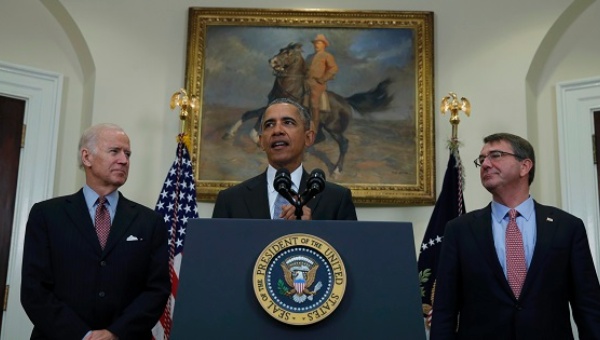 President Obama is making his case to the nation to finally close the much maligned detention centre in his final year in office.

President Barack Obama presented a four-point plan Tuesday to “close Guantanamo once and for all” the president said. The plan now lies in the control of Congress to approve the closure, or not.

Among the four main elements of the plan are: to ensure the 35 of the 91 detainees who have already been approved for transfer will be transferred; accelerate periodic reviews of remaining detainees to determine whether their remaining detention is necessary; use federal legal tools to deal with the remaining detainees and not military commissions, this includes those 10 detainees still being held under law of war detention who do not currently qualify for federal trials; and to work with Congress to find secure places in the U.S. in which to transfer detainees.

According to testimony from officials before Obama's speech, the closure plan submitted to Congress references 13 potential sites for detainees to be transferred to U.S. soil but does not endorse one specific facility.

Obama also highlighted the long-term savings to taxpayers that would result from closing the military prison, saving US$85 million after only one year, US$300 million over 10 years and at least US$1.7 billion over 20 years.

The plan has already been criticized by some human rights activists who say it does not go far enough to ensure Guantanamo's closure.

According to the Center for Constitutional Rights, "The centerpiece of the plan — moving those detainees who have not been and will never be charged with any crime to a prison in the U.S. — does not 'close Guantanamo,' it merely relocates it to a new ZIP code."

The organisation also said there is nothing new in the plan, arguing it only lays out steps to finally release the men who have already been cleared for transfer, most for year, "and strengthening and speeding up the Periodic Review Board (PRB) process — but talk is cheap,” it said in a statement immediately following the president's speech.

However, Omar Shakir, a fellow for the Center for Constitutional Rights who works on Guantanamo legal cases, said that Obama could actually bypass Congress with these measures.

"There are many steps in Obama's plan that he has ample authority to carry out," Shakir told teleSUR. But he added that "it would be very difficult to have any confidence in this administration following through."

The plan must now be approved by Congress before it is implemented, which many say will be a hard sell. The Republican-controlled Congress has shown no signs that it will actually be interested in closing the facility once they see Obama’s plan. Some of the leaders, including House speaker Paul Ryan and Senate majority leader Mitch McConnell, have directly said that Guantanamo Bay should remain open.

“I would leave it just the way it is, and I would probably fill it up with more people that are looking to kill us,” Republican frontrunner Donald Trump said in an interview Sunday.

Nethertheless, throughout his speech President Obama emphasized the bipartisan support that once existed to close the detention center. He reminded the press that even former Republican President George W. Bush said he wanted to close the prison and admitted that most of the detainees who have been released over the years were under Bush's administration.

Obama also highlighted several reasons for closing the facility and why it should be considered a non-partisan issue.

According to the president, Guantanamo serves as “propaganda for terrorists,” is costly for U.S. taxpayers, harms the U.S.'s relationship with allied nations that are pushing for the prison's closure, and argued that keeping the facility open undermines U.S. values.

“President Bush said he wanted to close Guantanamo ... but he didn’t get it done and it was passed to me. I’ve been trying for seven years to get this closed, and have spent countless hours on this,” said Obama. “Our closest allies have raised this as an issue repeatedly … and I do not want to pass this onto the next president.”

Click here for the CSC leaflet: Close Guantanamo: End the US occupation of Cuban land