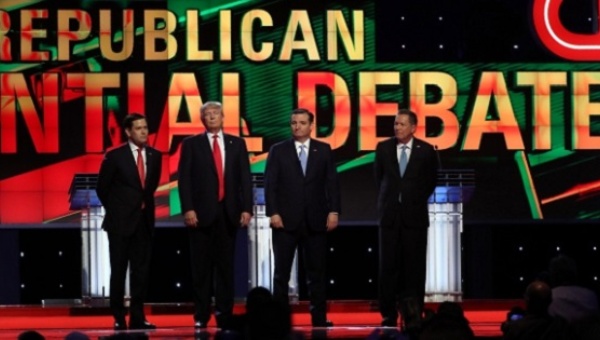 Marco Rubio scored a huge hit on the Republican debate stage in Miami on Thursday night, with strident rhetoric on the subject of Barack Obama’s reopening of relations with Cuba.

The Florida senator, the son of Cuban migrants, is seeking to win the Florida primary on Tuesday and thus rescue his flagging campaign for the White House.

He was asked about Obama’s trip later this month to Cubaand why the United States should not engage further with Cuba.

Rubio said the US changes had allowed money to flow to the Castro regime, and added: “Nothing will change for the Cuban people … In fact things are worse, than they were before this opening.”

The only result of “the opening”, he said, was that the Cuban government had more sources of money.

It was a huge applause line.

Donald Trump, who leads Rubio comfortably in polls in Florida, had previously said on the campaign trail that opening Cuba was fine. Under attack in the Miami debate from all the candidates who trail him in the polls and the mounting delegate count, he said “I want a much better deal with Cuba” and repeated a familiar line: “We don’t make any good deals.”

“I do agree that something should take place,” he added. “After 50 years it’s enough time, folks. But we have to make a good deal here.”

In response, Rubio rattled down a list of anti-Castro grievances and was applauded wildly again, drowning out attempts to ask Senator Ted Cruz – the son of a Cuban father and an American mother – the next question.

Would you break diplomatic relations with Cuba, Cruz was asked.

Cruz said the question illustrated “a real difference between us” on foreign policy. Trump, Cruz said, supports the “same basic trajectory” of policy as Obama and Hillary Clinton, when Obama’s first secretary of state, have established.

John Kasich, the fourth man onstage, was asked if he would encourage US companies to do business with Cuba. Kasich said he would not.

Trump, meanwhile, repeated: “We would not do the deal unless it would be a very good deal for us.”

On the topic of the Israel-Palestine conflict, Cruz blasted the Obama administration. "I don’t think we need a commander-in-chief who is ‘neutral” between the Palestinian terrorists and one of our strongest allies in the world."

It was an attack on Trump’s calls for “neutrality,” but the Republican frontrunner countered: "No one loves Israel more than me."

Trump also appeared to defend the escalating violence at his rallies, following another attack Thursday on a protester, this time featuring a 78-year-old man punching a Black activist in the face. "When (rally attendees) see what's going on in this country, they have anger ... They love this country… We have some protesters that are bad dudes. They have done bad things... They are really dangerous."

From both TeleSur and the Guardian