Che Guevara's son on Obama in Cuba: 'Maybe we can influence US in a positive way' 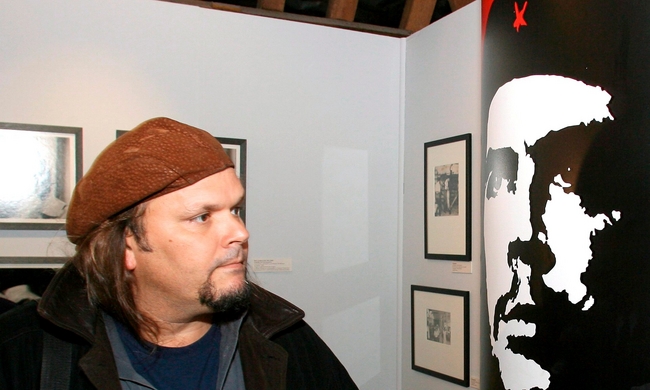 With wary optimism, the son of Ernesto “Che” Guevara is coming to grips with the visit to Havana this Sunday of a contemporary who just happens to be the leader of the world’s capitalist powerhouse.

Camilo Guevara – the eldest son of one of the Cuban revolution’s most famous figures – was born within a year of Barack Obama in the early 1960s, when Cuba and the US were starting one of the cold war’s most dangerous and enduring conflicts.

Guevara’s father was executed in Bolivia five years later. Today, in more peaceful but less triumphant times, he is dedicated to protecting Che’s legacy and ensuring that his father’s words – and not just his famous portrait – are remembered around the world.

But, like many in this island nation, he sees Obama’s imminent arrival as much a threat to that legacy as an opportunity.

“It’s a historic and very important visit. It’s the first time a US president will visit an independent Cuba,” Guevara tells the Guardian. “But the US is an empire. Their nature is not to set the table and invite you for a feast. History shows us that every time they set a table, you have to accept you might be poisoned or stabbed in the back. But let’s see.”

In the outside world, Obama’s visit is a peacemaking, groundbreaking trip to a small country that has resisted its superpower neighbour for more than half a century. It appears aimed at starting a triumphant countdown for a president in his final year in office.

US officials say this will be one of the biggest presidential delegations in recent history. As well as his family, Obama will come with four cabinet secretaries, about 40 senators and members of Congress, and dozens of business figures and prominent Cuban Americans. Along with secret service agents, logistics specialists, journalists and the Tampa Bay Rays baseball team (who will play a match that Obama will attend), the official US party will fill 1,200 rooms.

The immense size is no accident. This is a visit designed to impress. Among his domestic audience, Obama wants to secure his legacy as a peacemaker. Among his Cuban hosts, he wants to show how much there is to gain from closer ties.

Guevara believes his father would have had mixed feelings about the rapprochement. “You can see that he didn’t trust anything coming from the empire,” he says, referring to his father’s extensive writings. “But he was a man who felt it was important to have relations with the world, that it was necessary to learn from the positives and the negatives, and he felt that we could also transmit ourselves outwards … Maybe we can influence the US in a positive way.”

We meet at the Che Guevara Study Centre in Havana, which houses a collection of letters, essays and speeches that has been recognised by Unesco as part of the global heritage.

In appearance and speech, Camilo Guevara comes across as very much his father’s son. His face gives a clue to how Che’s famous looks – now plastered on millions of T-shirts and posters – might have aged if he had not been killed in Bolivia before his 40th birthday. The beard is grey, the flowing locks have receded and the piercing eyes need glasses.

He comes across as gregarious, humorous and intense. Although he is not a government spokesman, he reiterates the oft-stated official line that the talks can only succeed if the US respects Cuban sovereignty, engages in talks as an equal and removes the remaining obstacles to closer ties – namely the economic embargo and US navy occupation of Guantánamo Bay.

But while the revolutionary ideology is strong, it is not inflexible. “We have a project as a nation. It has taken us to where we are now. Tomorrow, if we face a different situation, then we have to modify our project,” he observes. “If, in the worst case, relations with the US destroy our principles, our ideals, our national project, it means it wasn’t strong in the first place.”

Change, if it comes, will be at a pace that the Cuban government chooses. Until now, that has led to criticism in the US that Obama has given more than he has got from his deal with the Cuban president, Raúl Castro, on 17 December 2014.

Most of the movement so far has come from the US side – most recently with this week’s announcement of relaxed currency and travel controls – but it is not entirely a one-way traffic.

Cuba has released several dozen political prisoners (though detentions and beatings continue), expanded internet access (although it is still very limited) and entered talks on security, human trafficking and narcotic control. On the big issues – free elections, free press, free assembly – there has been almost nothing, although there is growing speculation that next month’s Communist party congress could debate further steps forward on economic reform and possibly even a referendum on constitutional reform.

So far that is just guesswork. But Obama will try to nudge debate forward in that direction during his speech, the main message of which will be “Cuba’s future is for the Cuban people”, but officials stress the goal is not to foster regime change but to remove restrictions that were impeding the island’s ability to develop and decide its own fate.

Guevara is cautious about the president’s motives.

“I don’t know Obama in person. He appears intelligent and sensitive towards the major problems of humanity, but he came to power in an election, not a revolution. He was supported by corporate America,” Guevara says. “The colour of skin is one thing, the colour of ideology is another.”

Nonetheless, he believes Obama has helped to usher in much needed change that will endure to some degree even after he leaves office. “The fact is that US-Cuba relations were stuck. Regardless of who becomes president next, things can’t get any worse than they were in the past.”

The present, however, has its fair share of troubles, which the US could potentially help with. The economy is weak. Shops are often short of basic commodities. Leftwing regional allies that once helped to fill the gaps are now struggling with their own problems.

Leftwing leaders in Argentina and Bolivia have suffered election defeats.

Guevara blames the reverses of the Latin American left on cyclical factors: governments lost sympathy when they struggled to realise the hopes of the electorates, but he says this has been compounded by a hostile media, oligarchs and transnational companies.

“This is a temporary setback. [Leftwing movements] haven’t disappeared or died,” he says. “The tide has retreated a few steps, but that is what happens before a tsunami comes surging back.”

Almost 50 years after his father’s death, Che remains a figurehead for such movements, but he is also now a commercial icon.

Guevara says part of his objective at the study centre is to ensure that his father’s image is not separated from his ideas and history. “Che continues to play an important role, but we have to recognise that the symbol of Che means different things in different countries. His image on a flag at a football match in Europe is not the same as his image on the T-shirt of a miner marching for rights in Latin America. Unfortunately there are some who try to separate the image and the history. It’s one of our objectives to address that.”

Among the documents in the archive is a short goodbye message that Che wrote to his children in the knowledge that he could soon die. It implores them:

Above all be sensitive, in the deepest areas of yourselves, to any injustice committed against whoever it may be anywhere in the world.”

Guevara is reluctant to share personal reminiscences. “I have flashes of memory but I’m not sure how reliable they are because we fill emptiness with our own visions,” he says. Instead he prefers to focus on the concrete legacy by distributing his father’s ideas online, in educational materials and exhibitions.

All of which are politically toxic to a US president during campaign season. Obama will be cautious about endorsing his hosts. Officials say he will not meet Fidel Castro. Instead, he will be more intent on workshops with entrepreneurs, talks with civil society groups, a baseball match, a speech to the nation’s youth, and bilateral talks.

There is no chance he will visit the Che Guevara Study Centre for a lesson in revolution. For Guevara that is a shame: “If Obama comes, he might learn something.”