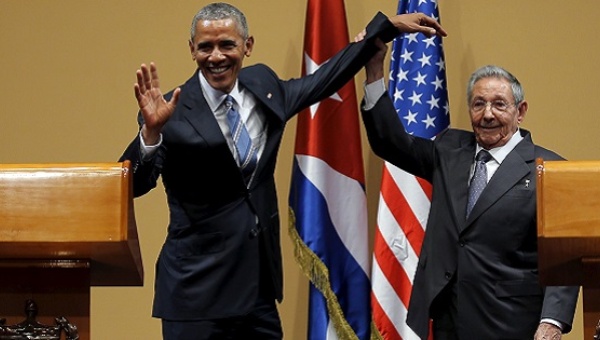 Cuban President Raul Castro was uncompromising about the need for the United States to lift the economic blockade against his country and the return of Guantanamo Bay to Cuba after his one-on-one meeting Monday with U.S. President Barack Obama.

President Raul Castro praised the progress made in the storied relationship between his country and the United States but added that much more could be realised in Cuba-U.S. relations without the economic blockade.

“The blockade is the most significant impediment for the development of the Cuban people, that is why its elimination is essential for the normalisation of relations,” said President Castro.

Raul Castro signaled that he expected the dramatic shift in the relationship between the two countries would be permanent.

“We agree that we have a long and complex path ahead of us but what is important is that we have started to take steps to build a relationship of a new kind, one that has never existed before between Cuba and the United States,” said Raul Castro.

“Today I affirm that we must practice the art of civilised coexistence, which means accepting and respecting differences and not make them the center of our relations, but instead promote links that benefit both peoples and focus on what brings us closer and not on what separates us,” he added.

The Cuban leader thanked the Obama administration for reiterating its position that the blockade be lifted but said it has not been enough. “We oppose to the double standard on human rights as well,” the Cuban president added.

Meanwhile, Obama thanked Raul Castro for his hospitality, and said that it would have been “unimaginable” for more than 50 years to hear a U.S. president speak from Cuba.

President Raul Castro welcomed Monday his U.S. counterpart President Obama at the Revolution Palace in Havana, as part of the historic visit of a U.S. president to the island, the first in 88 years.

In his first comments since arriving to Cuba, U.S. President Barack Obama expressed his gratitude to the U.S. Embassy staff in Havana and shared his optimism at the prospects of a new U.S.-Cuba relationship.

On Tuesday Obama is expected to address the Cuban people in a live speech Tuesday, and he will also meet with U.S.-backed activists before attending an exhibition baseball game between the Cuban national team and the Tampa Bay Rays.

Relations between the U.S. and Cuba have thawed under Obama, who has restored diplomatic relations and lifted several travel and trade restrictions.

However, despite the improved ties between both countries, there are pending issues that need to be solved in order to fully normalise relations. President Raul Castro has reiterated that the U.S. military base at Guantanamo Bay must be returned to Cuba and that the blockade that has been imposed on Cuba since 1960 needs to be removed.