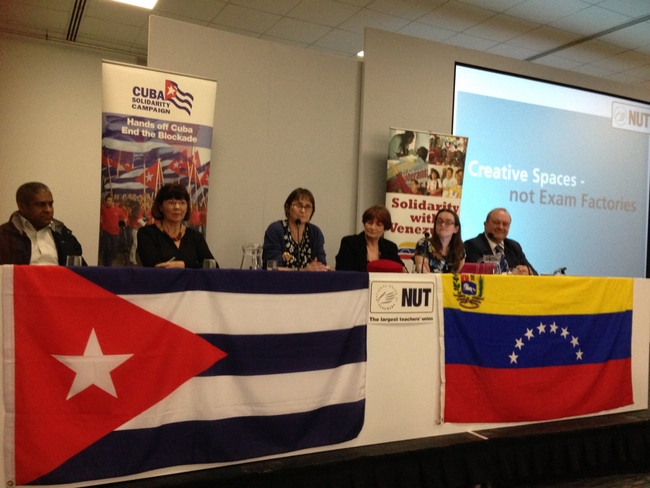 100 delegates attended a packed Cuba Solidarity Campaign fringe meeting at the National Union of Teachers (NUT) Conference in Brighton over the Easter Weekend.

Christine Blower, Retiring NUT General Secretary, who has been a stalwart supporter of Cuba and its world-class education system over the years, sent solidarity greetings on behalf of the NUT to the Cuban people.

"Despite all the difficulties that come with the blockade, Cuba is an inspiration and still manages to export its health and education around the world", she said.

She spoke about the NUT’s “solidarity in action” with Cuba, including the NUT supporting a programme of teaching English to Cuban teachers in Edinburgh, who returned to Cuba with the skills to teach English to Cuban medics. Many of these medics then went on to fight the Ebola outbreak in West Africa, where Cuba sent the largest contingent of health workers.

The NUT General Secretary paid tribute to the work of CSC and its trade union affiliates in the campaign to Free the Miami Five and urged delegates to support the Miami Five Freedom Tour and to attend one of the many meetings due to take place in their visit in July.

“I spoke at many vigils for the Freedom of the Miami Five outside the US Embassy in London and now we can look forward to celebrating their freedom together this summer”, she said.

“It is good that President Obama recognised Cuba’s achievements in education and in health” he said. “However, I can assure you, the blockade remains in place, and this remains the biggest obstacle for my country’s development”.

Dr Dodie Weppler-Grogan, CSC EC, said "The blockade is still firmly in place, despite diplomatic relations. It impacts on all life in Cuba, including, education, art and culture".

She spoke of her recent visit to Cuba in preparation for the ¡Presente! Exhibition taking place this October, which the NUT has supported.

"When you ask Cuban artists what would help them, they reply 'everything' as the blockade stops access to all sorts of materials. It’s not particular brushes or special paints or canvas – it’s just everything, right down to not having supplies of bubble wrap to secure the exhibition for shipping to the UK”, she said.

“The ¡Presente! exhibition will send profits from any arts sales to fund supplies for art education projects in Cuba”, Dr Weppler-Grogan said.

Philipa Harvey, Past President of the NUT chaired the fringe meeting, and noted how the world’s attention had been on Cuba this week, following Barack Obama’s historic visit.

“Whilst we must celebrate and welcome the positive developments between the US and Cuba, this is just the start a long process. It is crucial to stress that relations are still a very long way from being normalised; the blockade remains in place; Guantanamo Bay is still occupied; and the US continues to intervene in Cuba.

“Huge obstacles remain in the US to ending the blockade so the campaign to end it now is more important than ever to build on the current momentum that we are seeing”, she said

The lively meeting, which also featured speakers from Venezuela Solidarity Campaign, featured many contributions and questions from the floor, including praise of Cuba’s commitment for free, universal education. There was also criticism of the coverage of Obama’s visit in much of the media, which focused on criticisms of Cuban politics and society, rather than of the US policies towards Cuba, including the ongoing blockade and occupation of Guantanamo Bay.

CSC ran a successful stall at the NUT Conference, with many delegates signing up as new members and getting the latest information on Cuba and CSC. There was also a lot of interest in the October half-term NUT delegation to Cuba.