International solidarity with Cuba on May Day 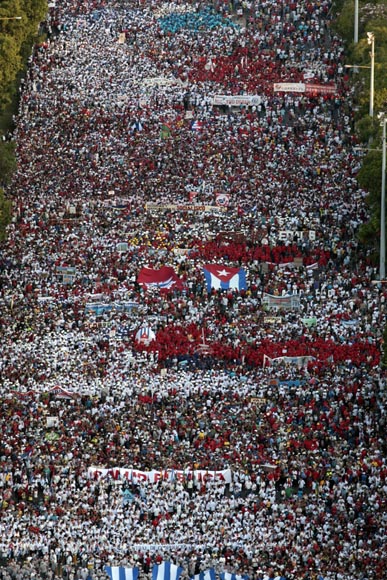 Trade union friends from around the world will accompany the marches scheduled all across the island to celebrate International Workers' Day under the slogan: For Cuba: Unity and Commitment.

Engineer Ernesto Freire Cazañas, head of the International Relations Department of the Cuban Workers’ Federation (CTC), speaking to Granma International, outlined some of the celebratory activities in which delegations attending the May Day parades will participate.

“From April 23 until May 8, we have designed a program of activities, which will begin with a course for union leaders affiliated to the World Federation of Trade Unions (WFTU). In parallel we will develop a seminar with trade unionists who make up the Encuentro Sindical Nuestra América (ESNA) organization,” (Our America Trade Union Encounter).

CTC leaders will exchange with a high level delegation from the Vietnamese General Confederation of Labour, presided by its General Secretary.

From April 24-29, activities will include a baseball game between teams from Cuba and Mexico, sponsored by workers’ associations from the two countries. On the 26th, international delegates will attend a gala concert to celebrate May Day.

On the 28-29th, visits to workplaces and bilateral meetings between Cuban trade union organizations and their international counterparts are scheduled.

On the 29th, a political meeting will take place in Havana, supported by the WFTU office for Latin America and the Caribbean, with the presence of vice presidents and general secretaries of different union federations. The event will serve as a preparatory meeting in the lead up to the 17th World Trade Union Congress, to be held in October in Durban, South Africa.

On May Day itself, mass events will be held in all cities of the country, characterised by colourful, joyous expressions of support for the Revolution.

On May 2, the International Solidarity with Cuba Meeting will be held at Havana’s Convention Centre, attended by trade union leaders and solidarity groups, convened by the Cuban Institute of Friendship with the Peoples and other civil society organisations.

On May 3-4, bilateral meetings will be held between Cuban trade union representatives and their international counterparts.

Compañeros from the field of sports will hold a working meeting with their counterparts from the Pan American Confederation of Workers Sports (COPADET).

The main issues to be discussed during the various activities?

We are debating a counteroffensive consensus to tackle neoliberal policies, which are resurfacing today with the rise of right-wing parties in governments of the region.

We will analyse world current affairs with a focus on the labor movement in Europe, today active in the struggle in Greece, France, Spain and other countries, affected by economic adjustments to address the general crisis of capitalism.

We will discuss the issue of the construction of socialism in Cuba, where a criminal economic, financial and commercial blockade imposed by the United States continues and is the main barrier to developing our economy.

On this point, we call for unfaltering solidarity with Cuba, as the harassment and subversive policies to destroy the Revolution continue.

The link between Cuba and the other participating organizations?

We have trade union ties in 136 countries and with over 115 organizations.

In how many international events does Cuba participate?

On average, we participate in over 35 international events each year, but there are many more people who come to Cuba. We annually receive over 2,000 leaders and representatives of trade union organizations.

Our aim is to present our reality; we promote exchanges between people from abroad and work collectives, in close liaison with the workers.

In 2015, on average, the number of delegations who visited grassroots trade union organizations was in the order of about nine a month, and in the last quarter it was eleven. There is a lot of interest in learning about the Cuban social process.

Union events to be held this year, beyond the May Day activities?

In June we will participate in the Conference of the International Labour Organization (ILO), which takes place annually in Geneva, Switzerland, at which Cuba will present its main concerns surrounding the difficulties faced by the labor movement today.

Trade union exchanges with Norway and Poland are planned for different times of the year.
In October we will attend the World Trade Union Congress in South Africa. In November we are invited to the congress of the Confederation of Peruvian Workers, plus many other union exchanges.

How is the Cuban trade union movement presented abroad and how is it viewed?

Although we have been undergoing a reestablishment of relations with the United States and are now in a long and complex process, the blockade remains intact, subversion against the Revolution persists, and the intention to undermine the Cuban political system from within continues, mainly aimed at the non-state sector, which is a complement of the Cuban economy.

Therefore we talk openly about these issues with delegations visiting the country. When we attend an event abroad, we strengthen our position in relation to our principles. That is, Cuba will never renounce the Revolution, or her history, or the construction of socialism.

We need voices of solidarity to continue the struggle against capitalism and imperialism.

At the same time we continue to provide solidarity and will not renounce the agreed programs with a group of third world countries in the field of health, education, agriculture and scientific activity.

Cuba remains open to international solidarity and our relations are of non-interference in the internal affairs of other countries.

Cuba Solidarity Campaign has over 500 affiliated trade union branches and regions. If your branch would like to affiliate to CSC, please do so online, or by filling out this form, or get in touch with Ollie Hopkins, Campaigns Officer, campaigns@cuba-solidarity.org.uk

Would you like to visit Cuba during May Day 2017? CSC run two May Day Cuba visits; the May Day Study Tour and the Young Trade Unionists' Brigade. Please get in touch if you are interested in either of these tours on 0207 490 5715.