Reporting from the Morning Star and Radio HC | Saturday, 30 April 2016 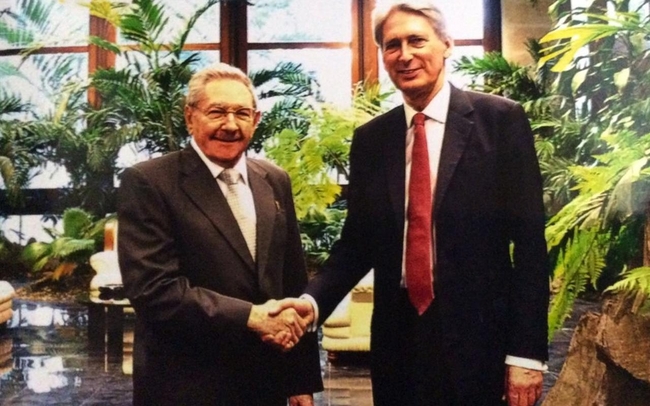 During the cordial exchange, President Raúl and the UK foreign secretary confirmed what they both described as significant advances in ties between the two countries and broad potential to further expand and deepen relations in areas of common interest.

Raúl Castro and Philip Hammond both praised the signing of an agreement to regularise Cuba's middle and long term debt with the United Kingdom, which they agreed, will contribute significantly to strengthened economic, trade and financial relations between our two countries.

"Britain has maintained diplomatic relations with Cuba from before the revolution, however it has allowed its trade relations with the island to decline to what are quite frankly pathetic levels.

"We hope that Mr Hammond's visit will see the beginning of a reversal of this trend. However until the British Government makes real efforts to protect British businesses and organisations that want to trade with Cuba from the ongoing effects of the US Blockade this is unlikely to happen.

"British design company Wimberly Allison Tong & Goo was fined $140,000 (£96,000) earlier this year for taking part in a hotel construction project, and the Coop bank has recently closed our accounts due to the blockade.

"The British Government has the power to take action against both of these extraterritorial applications of the US Blockade and he should do so immediately on his return to Britain if he is to be seen as serious about promoting UK-Cuba relations", he said.

Hammond became the first British secretary of state to visit Cuba in more than 40 years.

Junior Foreign Office ministers were dispatched to the island under the last Labour government in 2005 and more recently during the Con-Dem coalition in October 2014.

But the last senior minister to visit the socialist country was Peter Shore, trade secretary in Harold Wilson’s Labour government, in 1975.

Mr Hammond’s trip is part of a six-day tour of Latin America, which also includes stops in Colombia and Mexico.

“But the facts speak for themselves — British trade with Cuba is absolutely derisory, minuscule, pathetic.

“Until the British government takes real measures to protect British companies nothing will change.

“Despite our misgivings about Philip Hammond, British engagement with Cuba is welcome with the proviso that it’s backed up with legal, concrete measures to enhance British trade.”