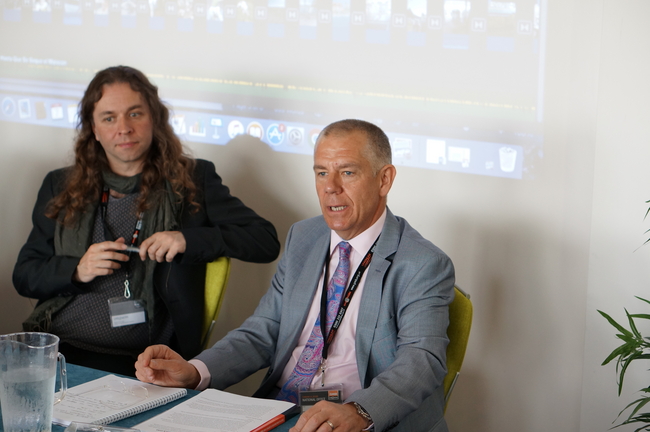 Tim Roache, the new GMB General Secretary, urged solidarity with Cuba at this crucial time at a packed GMB Congress fringe meeting in Bournemouth, where he spoke alongside Mel Bartlett and Ross Holden, two young GMB members’ who had recently returned from the young trade unionists’ May Day brigade to Cuba.

“We have a duty as trade unionists to stand in solidarity with Cuba,” Tim Roache said, "The blockade is still in place and Cuba needs our solidarity in their struggle to end it".

Speaking at his first GMB Congress since being elected General Secretary, he stressed the importance of international solidarity work within GMB, which he said he would ensure increases under his leadership, and urged branches to affiliate to the Cuba Solidarity Campaign.

“Cuba is by no means perfect but they live in a world where people are put before profit. Their world is one in which every person has a home, has food provided, has free education for life and can access a world class level of healthcare for free. I experience a world where I got ill and got given antibiotics in two minutes rather than two weeks!”

“In Britain, some supporters of Cuba are concerned about the impact of a closer relationship with the United States – but Cuba is not going to suddenly roll over and give up the gains of the Revolution. They have sacrificed a lot for their achievements so they will not let them go and we must support the Cubans to choose their own destiny on their terms.”

“Despite all the hype and headlines about the improving relationship with the US, the blockade is still in place so we must continue to campaign to end it”, she said.

Ross Holden, GMB Young Members Communications Officer, spoke about his experience on the brigade at the fringe. “I was inspired by Cuba’s achievements, where, despite being a developing country under blockade, last year Cuba became the first country on earth to eradicate the transmission of HIV from mother to child.”

Ross’s contribution also focused on the brigade’s visits to local co-operatives and how co-ops are taking an increasingly more important role in the economic development of Cuba.

“Going to Cuba on the brigade with CSC takes you away from the tourist trail and offered unique opportunities to meet and discuss with important figures in Cuban politics and special places of importance. We saw the Ulises Guilarte, the general secretary of the CTC (the Cuban TUC), Salvador Valdes, Vice President of Cuba, and many other important Cuban trade union and political figures speak – something you wouldn’t experience on a tourist holiday to Cuba!”

“Also, meeting with and speaking to ordinary Cubans, often in rural communities, was a real highlight for me. Their hospitality and generosity meant they treated us as friends rather than visitors. These communities have their own intimate connection to Cuban socialism and were more than happy to answer questions on Cuba today and their opinions on current issues such as relations with the U.S. in light of Obama's recent visit.

“One Cuban told us that the new relationship is like an ant sleeping with an elephant - so Cuba has to be aware at every point! They said how the US goal in Cuba has stayed the same; it is just a change in tactics, so vigilance is needed”, he said.

A lively Q&A session followed the fringe, with many delegates signing up as members and pledging to affiliate their branches to CSC to assist in the campaign to end the blockade once and for all.

Affiliate your branch to CSC here