Cautious optimism for the future at AGM 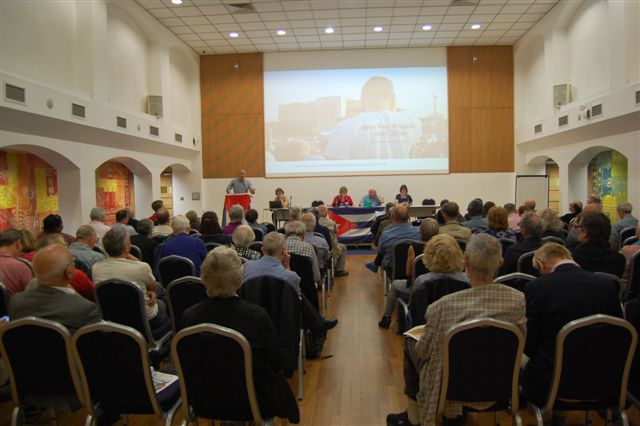 The AGM reflected on the last year’s work and achievements by Cuba Solidarity Campaign and unanimously agreed the Annual Plan for 2016-17 which was moved by CSC Director Rob Miller, who also gave a special update on the approaching Miami Five Freedom Tour.

Rob spoke of the Co-op Bank’s decision to close the CSC bank accounts due to US blockade legislation as “the latest assault of a long line of attacks on our work due to us working with Cuba” and said how CSC was considering legal action on the issue. Demonstrating the impact of CSC’s work and the Co-op’s decision, the CSC Director cited how the issue had now been raised in the UK, Scottish and Irish Parliaments – and by Cuba at the United Nations.

There was lively discussion around motions on topics including Cuban Culture and the Presente! Contemporary Art Exhibition, the closure of CSC’s bank accounts by the Co-operative Bank, the ongoing US blockade, and negative developments in Latin America including Brazil and Argentina.

NUT past President Philipa Harvey was a keynote speaker at the AGM, where she paid tribute to retiring NUT General Secretary Christine Blower for her stalwart support and solidarity with Cuba over the years, which received a warm applause from delegates and visitors.

Philipa spoke of the NUT’s solidarity with Cuba including supporting a programme of teaching English to Cuban teachers in the UK, who returned to Cuba with the skills to teach English to Cuban medics. Many of these medics then went on to fight the Ebola outbreak in West Africa, where Cuba sent the largest contingent of health workers, she said.

The former NUT President reaffirmed the NUT’s support for the Miami Five Freedom Tour and October’s Presente! Exhibition and spoke about her visit to Cuba this winter, where she heard First Vice President Miguel Diaz-Canel speak about how teachers and workers are involving in making and implementing education policy in Cuba. She joked how Diaz-Canel said Cuba “needs to improve on 80 percent turn-out figures for trade union branch meetings” – demonstrating another world to Britain!

Guillermo Parera Lambert, press officer from the Cuban Embassy thanked the AGM for the support and solidarity that ultimately helped free the Miami Five and urged delegates to continue to show solidarity with Cuba to end the US blockade.

CSC National Secretary Bernard Regan gave a timely analogy of US intervention in Cuba, citing a recent increase in intervention on the island, with up to $30 million of funding available from Congress to pursue the US goal of regime change.

On the same topic, Dr Steve Ludlam, University of Sheffield’s Cuba expert, reflected how since 17 December 2014, US President Obama has been “trying to engineer a climate of protest against Cuban government" by targeting the new private sector to attempt build opposition to the Cuban government. “We are not naive, we know what the US means by ;empowering the Cuban people’ and ‘democracy building’, he said – “They mean ‘regime change’”.

The continuing US blockade of Cuba was discussed. Luis Santamaria, CSC EC member, warned of the danger of being in a situation of “no man’s land, where there is a perception that the blockade is over following Obama’s visit, but the fines and sanctions continue in full force”.

The AGM concluded by electing 35 members onto the Executive Committee to carry out the agreed 2016-17 Annual Plan.

Teresita Vicente thanked the delegates for their campaigning on the blockade and on Guantanamo Bay but at the present time “it is clear that the US has no intention to return the land to Cuba”.

On the topic of improving relations between the US and Cuba, she said “Normalisation should not be seen as an act of signing something or simply re-establishing diplomatic relations – it should be seen as a process. It’s going to be a long process and the situation we’re in needs intelligence.”

Dr Steve Ludlam celebrated the achievements of the ongoing revolution. “Cuba shows how where there is the genuine will – the priorities of human well-being can be the priority of the state. If you have a political system, backed up by the constitution and revolutionary commitment, it is possible to achieve social security, free education and free healthcare.”

Dr Francisco Dominguez spoke of international solidarity in Latin America, including the achievements of the Cuba-Venezuelan programme of Operation Miracle, where over four million people across Latin America, the Caribbean, Asia and Africa have had their eyesight restored. “I dream of the day that I hear about the United States providing thousands of doctors all over the world”, he said, in reference to the 65,000 Cuban internationalists that are carrying out health and education programmes all over the developing world.

Dr Lauren Collins, a specialist of Cuban democracy, spoke about how Cuba stands in contrast to much of the West, which has seen a “hollowing out of democracy” in recent years. “In Cuba, scarce resources mean decisions need to be taken centrally to ensure a fair distribution and avoid a postcode lottery situation, but it’s at a local level where much of the democratic process takes place”.

Dr Collins gave a detailed insight into the participatory socialist democracy in Cuba, where “Meetings take place in workplaces, neighbourhoods, in the women’s federation, in the assembly - and then changes will be made – everyone will know the direction of the policy of the country and has the opportunity to have a say in it”, she said.