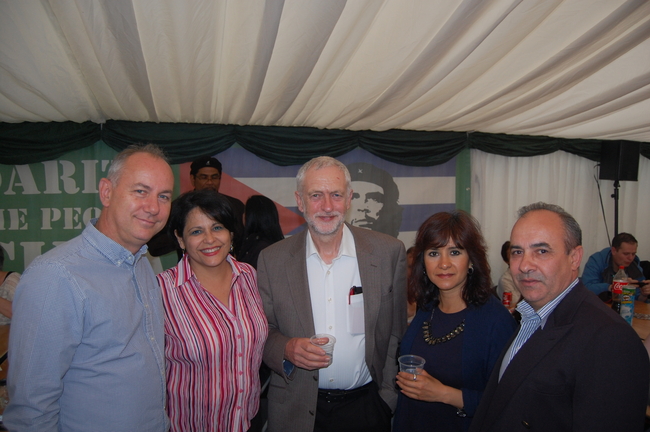 Over 500 guests attended an evening of celebration and solidarity at the 14th annual RMT Garden Party with Cuba, a real highlight of the trade union and labour movement annual calendar.

John McDonnell paid tribute to the trade union movement for campaigning for a better world and celebrated the anniversary of Jeremy Corbyn getting on the ballot paper in the labour leadership contest. Many guests formed an impromptu queue around Jeremy Corbyn, the longstanding supporter of Cuba and progressive governments in Latin America, for autographs and photos when he arrived.

Mick Cash, RMT General Secretary and Sean Hoyle, RMT President both hosted the event. Mick Cash urged continued solidarity with Cuba and called for an end to the ongoing US blockade. He also sent solidarity greetings to Orlando following the recent attack on the LGBT nightclub.

Sean Hoyle, speaking at his first Garden Party as RMT President, praised Cuba for having the best doctor to patient ratio in the world and for their excellent internationalism in health and education.

Teresita Vicente, Cuban Ambassador told the garden party; “We now have diplomatic relations with US but their tactics are the same. The blockade must end, the illegally occupied land of Guantanamo must be returned" she said. The Ambassador also warned of the threats of right wing forces in Latin America, backed up the United States, who have unseated progressive governments in Argentina and Brazil.

Tim Roache, GMB General Secretary, paid tribute to the trade unions for their key role in the campaign to free the Miami Five. He also spoke of the inspirational experiences that the GMB young members had on this year’s young trade unionists’ brigade to Cuba. “They saw first hand that another world really is possible”, he said.

“The blockade is still in place we must continue to stand in solidarity with our sisters and brothers in Cuba until the blockade is ended once and for all”, he said.

Many at the celebratory evening entered the CSC Garden Party raffle which raised vital funds of over £2,000 for CSC campaigning work. One lucky guest, Helen Yuill, won two return flights to Cuba on the night - although she had just left before the prize draw so discovered her amazing first prize over the phone, when CSC Director Rob Miller called her to announce the news in front of the crowd. Several runners up also won a variety of Cuban goods including t-shirts, rum and books.

Guests enjoyed a night of a eating, drinking and dancing in a Cuban-style party atmosphere with music provided by Omar Puente and his salsa band, Raices Cubanas and an exclusive acoustic set from the Alabama 3, who played a greatest hits set of their county acid house music, including an extended sing-a-long to their huge hit “Woke up this morning”, where they changed the lyrics to “Woke up this morning, joined the RMT”.