Colombian Government and FARC-EP Sign Historic Accord in Cuba 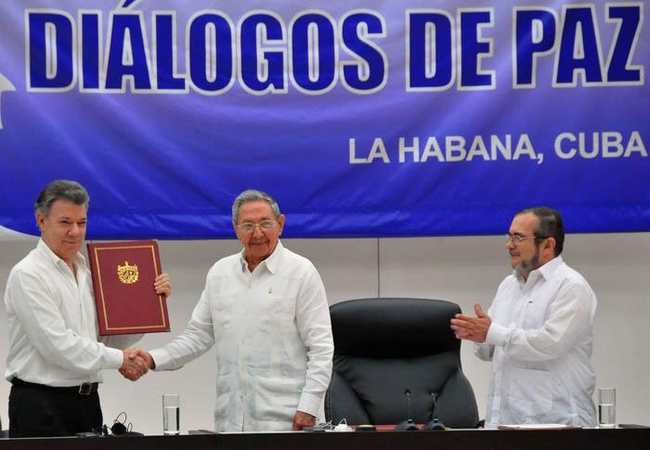 The Colombian government and the FARC-EP signed a bilateral and definitive agreement on a cease-fire and the cessation of hostilities, considered a key step to achieve peace in that nation, which has lived more than 50 years of armed conflict, in Havana on 24 June.

The representatives of the Government of Colombia and the Revolutionary Armed Forces of Colombia-People's Army (FARC-EP), as well as the accompanying and guarantor countries signed the historic document.

The text was handed over by President Raul Castro to Juan Manuel Santos, Colombia's president, and Timoleon Jimenez, commander of the FARC-EP.

Also attending the signing ceremony, held at the Protocol Hall of El Laguito were the heads of delegations of the guarantor countries; Bam Ki-moon, Secretary General of the United Nations, and other heads of state of Latin America and personalities.

Before the signing, the guarantors of Cuba and Norway, Rodolfo Benitez and Dag Nylander, respectively, read the joint communique number 76 which also includes the agreement on the surrender of weapons, security assurances and the fight against criminal organizations responsible for killings and massacres.

The text points out that both parties express their commitment to contribute to the emergence of a new work culture towards a national consensus in which all sectors commit to an exercise of the policy of democracy and civilised debate.

According to the communique, the parties agreed to establish a tripartite monitoring mechanism comprising the police forces of Colombia, the FARC-EP and an international component with UN members, and especially of the CELAC.

It was known that for the cease-fire and surrender of the weapons a roadmap to ensure that within 180 days the process is completed will be prepared.

According to the agreement, the United Nations will receive the entire armament of the FARC-EP, which will be destined to the construction of three monuments agreed between the national government and the guerrillas.

Twenty-two areas of normalization, temporary and transitory, and eight camps, with the goal of driving the ceasefire and the start of the process of reintegration of the FARC-EP in the political, economic and social life of the country will be established.

After nearly four years of negotiations in Havana, this step brings closer like never before the end of the armed conflict that for more than five decades Colombia has suffered, as the parties have stressed.

The Colombian government and the FARC-EP recognise that there are still important and difficult outstanding issues pending in the Negotiating Table, but that the conditions to achieve by 2016 a final agreement exist.