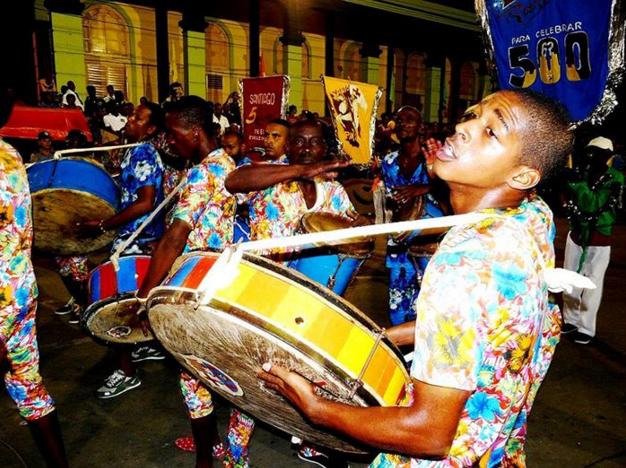 SANTIAGO DE CUBA.— Santiago's carnival is in a nutshell, a spellbinding mix of colors, flavors, smells and heat strong enough to astonish the most audacious, and overpower all five sense in a single blow.

Renowned for its originality, wow-factor, and popular appeal, the annual carnival held in July (this year from the 21st to the 27th) reaches beyond the city’s half a million inhabitants, seeing the return of natives living elsewhere, and arrival of foreign visitors attracted by the famous event and eager to participate in the this truly authentic expression of Cuban culture.

The importance of such an authentically Cuban celebration, enriched by the centuries of political, economic, and social transformations which have taken place in the city, as well as the experiences, and highs and lows of its residents, was recognized this past 2015, when Santiago Carnival was officially declared Cultural Heritage of the Nation.

A MIX OF TRADITIONS

Although its origins date back to the early colonial period since the city’s founding in 1515, festivities were linked to Saint James' Day (Santiago Apostle) on July 25, however, these religious processions were transformed over time by residents into a socio-cultural phenomenon.

To understand why Santiago carnival is so popular, you need only visit the Carnival Museum (the only one of its kind in Cuba) located on Heredia Street, which has already received 18,000 foreign and national visitors thus far this year, where institution experts have filled every room with examples of the brightness, color, and rhythms that characterize the event.

In fact, Spanish, African and French-Haitian elements are evident as legacies left by the mix of different communities from around the world on the island, above all in the rhythms, dances, songs, languages, religions, performances, and culinary practices which make up carnival celebrations, the only one of its kind in the country to combine all these artistic expressions.

In regards to the influence of each time period, the tradition of decorating the streets with garlands, parading through different neighborhoods, various public games, and the masks and costumes worn by the mamarrachos (characters in flamboyant, colorful costumes) feature among other characteristic elements from the colonial era.

The French-Haitian and African influences are evident in the music, costume, dance and artistic performances, in areas with tables and awnings decorated with palm leaves made by residents, and dance troupes which carry on the long-standing traditions passed on from their members.

Santiago carnival’s vast popularity traverses borders like no other national celebration, and was exploited by presidential candidates during the pseudo-republic and industry magnates, who saw the opportunity to promote their businesses through the diverse array of artistic manifestations.

Such political and commercial propaganda, together with a wide array of illegal, discriminatory and marginalising practices would disappear with the triumph of the Revolution, while popular participation would grow and the best traditional expressions enriched with the values of the nascent society.

A CITY BUZZING WITH ACTIVITY

Year after year, citizens have overcome storms, difficult economic times, and health threats, among other problems, to continue to organize the area’s most eagerly awaited celebration, at which time the entire city comes alive.

Perhaps given his experiences, Rafael Carela Ramos who lives on Paseo de Martí, believes, “The People of Santiago are carnival, and everyone celebrates it in their own way. Carnival is the self-proclaimed right to enjoyment, a time of chance encounters and to make new friends, or as they say nowadays, to go wild.”

Work starts early to organise festivities, which despite being managed by an event commission headed by the Vice President of the Municipal Assembly of People’s Power, sees broad citizen participation, such as choosing the poster and music which will characterise this year’s festivities.

Self employed workers, breweries and rum factories, and the food industry in general will all be working flat-out, while kiosks will be set up, streets and stores decorated, floats built, dance areas designated, and the entire city adorned with triumphal arches.

No one knows exactly how many hundreds of thousands of people who for over 24 hours fill the emblematic streets of Trocha, Martí and Santa Úrsula, the Sueño neighborhood, J block in the José Martí district and Micro 1-B in the central locality of Abel Santamaría, Tivolí and Versalles, to name just a few of the most popular sites.

The Alameda del Puerto demands special attention, which with its vast line of bleachers, ample lighting, decorations and numerous food, beverage, souvenir and traditional craft stands, has over time become the battle ground where rival dance troupes and floats compete before a panel of judges.

Kicking off summer activities a day before the main carnival event, the aquatic and children’s carnival and arrival of the 100 year old Los Hoyos conga group among other drumming groups, offer participants a taste of what’s to come.

The entire city, filled with music, glowing in the light of fireworks, and with enough food and drinks stands to satisfy the hunger and thirst produced by such healthy revelry, isn’t enough to out-do the particular excitement generated by the parade and carnival group competition.

Everyone, from young and old, to workers and homemakers, are in some way or another involved in the eagerly anticipated spectacle which brings together months of hard-work creating eye-catching costumes, music and dance rehearsals, and the unveiling of the top-secret main floats.
Split into congas and parades, the first of these groups to perform include Los Hoyos, Paso Franco, San Agustín, El Guayabito, San Pedrito, Alto Pino, Veguita de Galo and Los Muñequitos, composed of self-taught musicians, whose mastery of percussion instruments and the Chinese trumpet have been pass down from generation to generation.

Speaking to Granma International Félix Bandera Ble, director of the Los Hoyos for the last 17 years, noted that the group’s x-factor lies in the blood and heart of its musicians who feed off the energy of the dancing multitude that spontaneously descends around them.

One of the most successful ensembles, La Placita, starts preparing from February, and despite many persisting limitations, its director Francisco Zalzabal de la Rosa notes that the group will never falter, as their work represents a commitment to the community, which always expects majestic costumes and outstanding parades.

Renowned throughout Cuba, Los Hombres-Carrozas owe their origins to designer and director Elio Miralles Rodríguez, who for the past 20 years has sought out and exhibited the beauty, when cleverly used, of recyclable, waste or mundane materials.

A recent project but one that has met with great public approval, Las Voluminosas, a gloriously colorful moving spectacle, stands out among the various floats created by state entities, for it’s sturdy, agile and graceful dancers.

An undeniable illustration of popular cultural character of the celebrations is its non-commercial nature. Previously monetary prizes were awarded, but now groups compete for fun, for love of the traditions of their respective neighbourhoods, and the people’s enjoyment.

Such has been the impact of Santiago Carnival throughout its history that Fidel Castro chose to launch the attacks on the Moncada Garrison during the height of celebrations on July 26, 1953, a landmark event in the nation’s history joyously celebrated every year by the Cuban people.

In short, when you think of Santiago de Cuba you might think of the heat epitomized in the natural zeal of residents and strong sunshine, a vibrant city with the characteristic temperament of its citizens; or the frequent seismic activity in the area; or the history encapsulated in its title as a Heroic City; but you might also think of Santiago Carnival, a sensation in its own right.